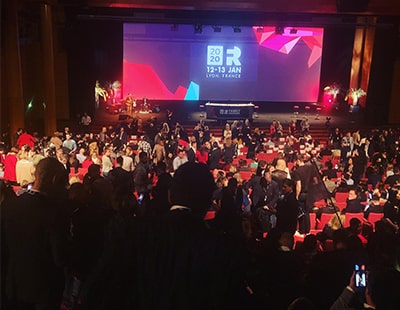 'It's a recipe, not a menu' is a mantra championed by a host of Keller Williams' millionaire estate agents.

But what are the ingredients and method to success for this agency powerhouse, which now lays claim to almost 200,000 agents and operates in 44 countries?

Estate Agent Today was invited to Keller Williams' recent two-day Family Reunion in Lyon, France, as a guest of its London Bridge Market Centre, to find out how the agency ticks and whether it has the potential to really take off in the UK.

How does the model work?

If you didn't already know, the Keller Williams (KW) model is markedly different from the one used by most UK agencies. It's a brokerage which takes on agents as associates.

Keller Williams was founded by Gary Keller in 1983 and now has 1,053 Market Centres - its alternative to a high street branch - across the globe.

The company opened in seven new countries during 2019 and now has 226 market centres outside the US and Canada.

Agency entrepreneurs working for Keller Williams pay a monthly fee for access to training and desk space, as well as software and technology support.

Each Market Centre is run by an Operating Principal, who is supported by a Team Leader and Market Centre Administrator. In some Market Centres there is also a Director of First Impressions. 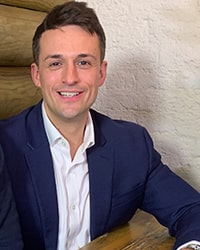 "Having been tried and tested since 1983, the structure is designed to offer huge value to agents, as well as substantial Return on Investment for both the agents and the leadership - it's win, win," says Chris Buckler, Operating Principal (OP) of Keller Williams London Bridge and a former independent agent in the Midlands.

Buckler (above right) says that in order to run a Market Centre, the OP must pass stringent due diligence and have a 'first-class record in estate agency,' designed to ensure that their agents provide a 'world-class' service.

Agents working for a technology firm?

Gary Keller made waves in 2018 when he announced that Keller Williams is 'not a real estate company anymore' and it is in fact a technology company.

And the company's focus on providing its agents with cutting-edge technology is on full display at the Lyon Family Reunion.

Command is a one-stop shop for all KW agents and they can access it for free. It's already being used for referrals, with agents able to use its Facebook-like interface to share business.

The platform also has a range of features to help agents customise marketing campaigns, automate tasks, manage databases and plug-in to other PropTech.

Plourde says that Keller Williams invested approximately $1 billion in technology in 2019, with the idea of keeping everything in-house and allowing its agents to grow further.

He says there is an 'arms race' and a subsequent need to move away from cheaper operators and portals that want to harvest agents' data.

Training is the key to success

Alongside technology, Keller Williams' principal focus is training. Gary Keller has written numerous books, the best-known arguably being ‘The Millionaire Real Estate Agent’, while there are also various Keller Williams training programmes available to agents, including 'Bold' and 'Ignite'.

And, as you might expect, there is no shortage of training opportunities at the Family Reunion. The various sessions over the weekend are in-depth and intense (particularly for non-agent journalists) and delivered by some of the company's most successful agents. 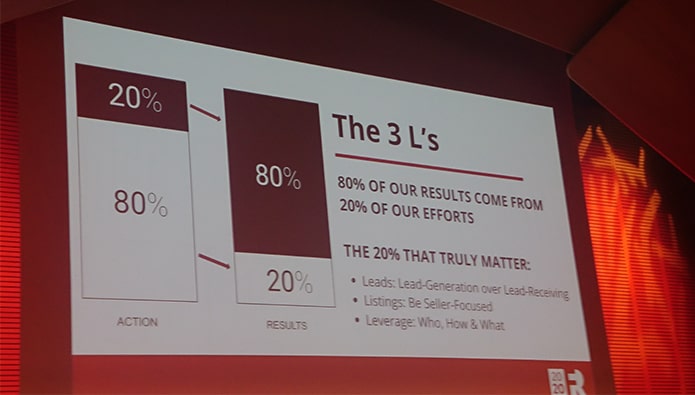 There are breakout sessions on win-win negotiations, how to thrive in a shifting market and how to become a millionaire real estate agent.

Trainees are provided with a wealth of anecdotes and solutions - with the 'recipe, not a menu' quote reappearing in numerous sessions. Andrew Barbar, the OP of the Palm Beach East Market Centre in Florida, goes as far as to say that agents need to 'submit and surrender to the model' in order to be successful.

But what value does this training formulated in the US have for a UK agent? 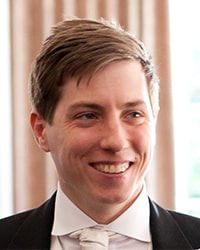 “One part of the training which was excellent was the win-win negotiations,” says Michael Bailey, one of the London Bridge Market Centre’s top-performing agents.

“There were bits in there that I've never been introduced to - I'd like to think being in the business 14 years and being learning-based, that I would have come across a lot of that before.”

“A lot of it was down to culture, and stuff that you don't normally get trained on. One key thing that keeps coming out is that 'culture is the glue that keeps us all together’,” he says.

As for the KW training in general, Bailey (left) says it’s the most he’s ever been involved in and helps to keep him at the top of his game.

“Training is pretty much non-existent [in the UK] - there's a full-on training programme at KW and I would put a lot of my success down to following the models.”

“I want to be the best of the best and to be that you've got to train daily, weekly.”

“From what I understand, the training that you get at the big corporates is a couple of times a year, if that, whereas every day there's some formal training at Keller Williams,” Bailey adds.

There is certainly a family feel to the weekend, something welcome at all family reunions no matter how large.

The firm's commitment to coaching and helping each other is hard to ignore. Between sessions there are plenty of instances of established millionaire agents offering advice to agents from different countries who are just starting out. 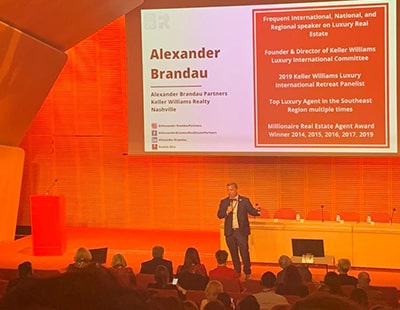 One of these agents is Alex Brandau from Nashville, who has been in the real estate business for 19 years. He tells Estate Agent Today what a Family Reunion means to him.

“It’s a unique opportunity to connect and mastermind with agents from all over the world.”

“Our company has a plan and path to the success each agent wants. Whether your goals are large or small, we have the blueprint to help agents get there. Sharing it with agent partners across borders and languages is still relevant and inspiring,” he says.

It's all in the culture

Keller Williams is also eager to showcase its unwavering company culture. From inspiring human stories and live charitable donations during the event's 'Cultural Summit', to some of the company's quirkier traits such as hugging seven people a day, Keller Williams' commitment to its identity is impressive.

Something else that is very noticeable is the energy from the Reunion's 800+ guests. There's enthusiastic dancing to an acoustic cover of Bruno Mars' ‘Treasure’ at 9am, bolstered by shouts of 'Energie!' and Mexican Waves from the multi-national crowd - something we don't expect to see at the upcoming NAEA Propertymark Conference. 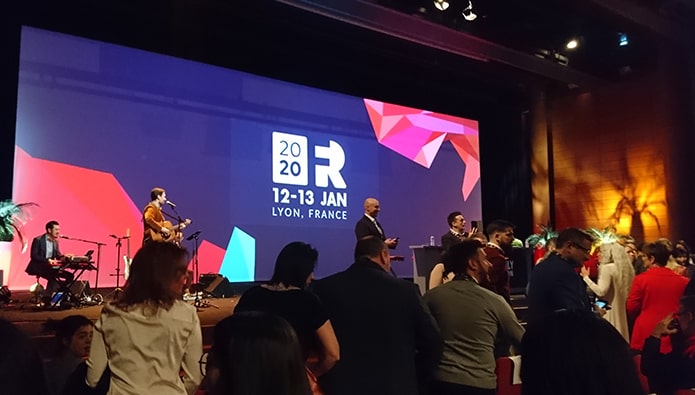 Throughout the two days, the level of emotion and gratitude shown by agents is genuinely staggering, demonstrating just how deeply many hugely successful professionals have fallen for the company's ethos and model.

Keller Williams' culture also focuses strongly on agent mindset - encouraging them to 'think like a CEO', with one of Gary Keller's many famous quotes being: 'leadership is teaching people how to think'.

This kind of mindset has already trickled through to one of KW London Bridge's agents, Josh Smith, who now runs his own agency after moving over from Spicerhaart’s Felicity J. Lord lettings department a few months ago.

“The freedom I get with Keller Williams is great. We are never told what to do, just guided in the right direction,” Smith tells EAT.

“I’m enjoying the chance to build a business, taking the same steps as others have done before me using the clear steps provided.” 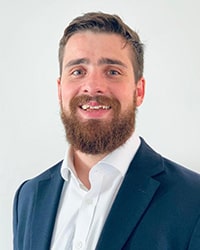 Smith (left) says he is benefitting from ‘world-class training’ from people who want to see him succeed.

“The flexibility of the structure means that I can get a haircut, go to the bank, go to the gym around my diary. It is allowing me to spend more time with loved ones,” he adds.

“I work harder than I did before but have the freedom to choose when and where I work.”

“It means that my motivation levels and productivity levels are always high.”

One of the key takeaways from the Family Reunion is how incredibly successful the Keller Williams model has been in France over a short period of time. 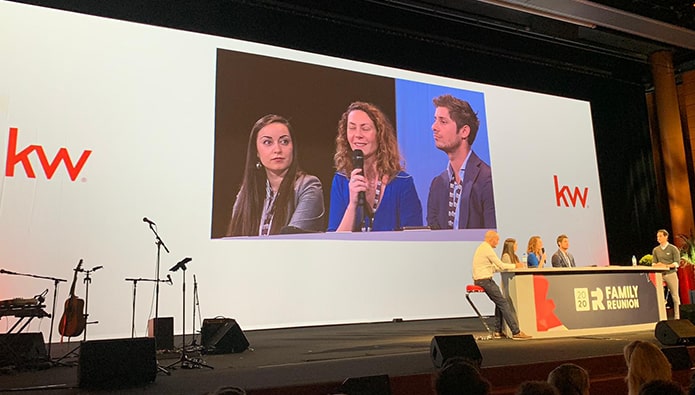 The French have shown their commitment to the Keller Williams brand by hiring two full-time translators to convert all the training courses and books to French, while many American English phrases are used interchangeably in Market Centres and in conversation.

London Bridge's Chris Buckler points out that the French are operating an almost identical system to the UK, praising their current national recruitment rate of approximately 150 agents per month.

He says that those in France have successfully gone through the 'mindset shift' and it's hard for us to disagree that the 'penny has dropped' across the channel.

Will it be a success in the UK?

And so to home shores, where the prospect of long-term success for Keller Williams' UK operation has often been questioned by industry insiders. 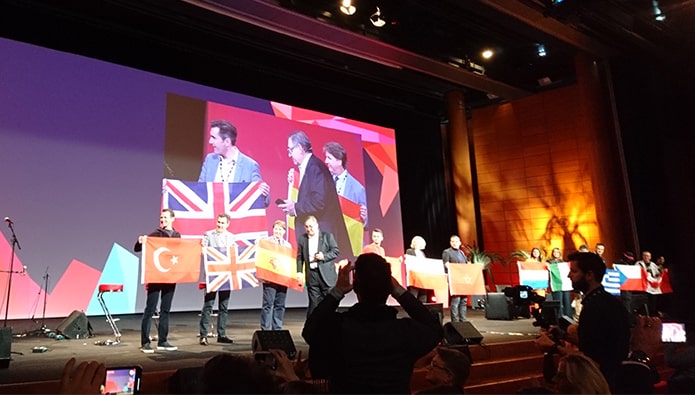 Meanwhile, Buckler says his Market Centre is committed to teaching agents to become business owners and that the risk is ultimately all on Keller Williams as they can 'leave at any point with their own database'.

"We need to make sure we empower our agents and we upskill them, so they know that it is possible," he says.

Everything required for the UK to replicate the huge growth in France is certainly there, but whether the Keller Williams recipe becomes an industry staple here remains down to those agents on the ground and the management teams providing the ingredients.

Video interview - how can agents use video to make sure they don't go bust? ...

What it takes to be a modern estate agent ...

For young people the length and breadth of the UK, Thursday...