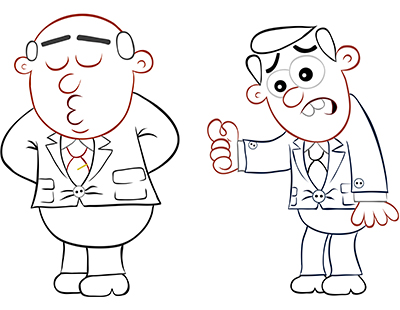 When a potential buyer comes into the office and says they want to view a property on your books, the natural reaction is to look keen and try to elicit some information to confirm their identity.

If that proves impossible, the estate agent worried about such things as money laundering legislation is hardly likely to introduce them to the property by arranging a viewing and that’s exactly the approach I took with a couple with whom we were having difficulty in establishing identity and their current sale status.

Imagine my dismay when the vendor then rings up, complaining about our tardy lack of activity when we failed to bring the couple for a viewing.

They had turned up on his doorstep, criticising us and asking to be allowed to look round because we weren’t helping by taking them to do it.

They said they had nothing to sell, contradicting what they told me.

Amazingly, the vendor just opened the door wider, welcomed them across the threshold and then gave them the full works even though he had no idea who they were.

They left, looking mighty impressed, and he rang my office feeling not just unimpressed but literally fuming at our lack of professionalism in not arranging a viewing.

No amount of explanation would placate him. The fact that buyers of unknown provenance, with no financial qualification of their suitability to proceed, had been prevented from wasting his time passed him by completely.

In future, he fumed, he would conduct all viewings and that was that. He was so rude I felt like disinstructing ourselves and letting him get on with it.

But feeling the need that he should be protected from himself, I persevered and tried to get him to follow through on an existing offer only a few thousand pounds shy of his asking price. But he insisted on prevaricating because the mystery couple had been back another twice and were promising to make an offer.

In the meantime, the chain arranged with the buyer whose offer was already in collapsed because there was no way we could progress it, try as we might.

Now the vendor is back on the phone because the mystery couple who made the promise of an offer have disappeared without trace and he can’t follow them up.

Neither, of course, can I because although I had a phone number for them they won’t pick up calls.

The vendor now wants to know if he should go looking for lower offers than the one he definitely had because in the process of the bidding by the vanishing couple he has excitedly found something he really wants himself.

It completely passes him by that he could be moving now if only he had kept the original process alive.

Sometimes I just despair at how you protect clients from themselves!