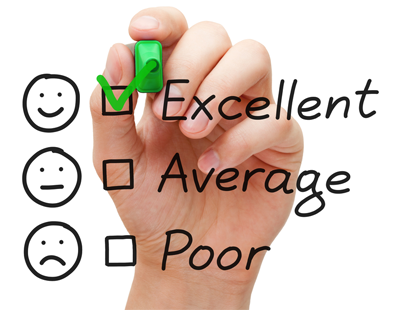 The rising phenomenon of agent-rating and review websites is a topic that seems to have caused considerable division and controversy among the agent community, with very few sitting on the fence. A bit like the portal...no, actually, better not open up that can of worms again.

Anyway, agent-rating websites – who are they and what do they do? The three main ones are AllAgents, Agent Tracker and raterAgent. Like Ronseal, agent rating websites pretty much do what they say on the tin.

It's a place where sellers and landlords can leave reviews about the service they’ve received from their agent. It might be positive, it might be negative, it might be somewhere in between. Then, people who are thinking about selling or letting their home, can have a look at the reviews and work out from there the best agent to plump for. Put simply, it’s TripAdvisor for the property industry.

Most industry people will have heard of AllAgents. They appeared on the scene two years ago, controversial, mysterious – and they’re still much the same now, very much a Marmite figure. raterAgent is the new kid on the block, launching in April 2015 after raising investment via Crowdcube.

Agent Tracker does something slightly different, in that as well as a verified review service, it partners with agents to offer free SEO support, free marketing and access to a financial services arm and conveyancing portal.

Rating and reviewing products, services and businesses is all the rage at the moment and the internet is awash with review sites. Why should estate agency be an exception to this rule? It's being done everywhere else, why shouldn't property be the same? Agents should be held to account more than they currently are. That way, the trust between agents and the public is improved.

The idea of agent-rating websites has been met with consternation by many, worried about the potential damage that could be caused by unflattering or damaging reviews, especially if these reviews have been deliberately and maliciously placed there by a rival agent. Similarly, some agents have been guilty of writing fake reviews for their own agencies, to boost their reputations.

Both these concerns are justified and understandable, and it's something that TripAdvisor and other specialist review sites have had had to contend with, too. While these issues exist, combating them is possible. Mal McCallion, raterAgent’s founder, says one of the ways to prevent fake reviews is to name and shame those involved in such underhand practices.

RaterAgent's analysis found that 78% of the fake reviews were from estate or letting agents giving themselves five star reviews, while another 14% were one-star reviews given to competitors. There are ways, though, to weed these fake reviews out. RaterAgent has a particularly thorough and stringent vetting system.

By using a triple-lock approach, each review is pitched against 13 ‘cheating metrics’ which analyse IP addresses, common fake phrase analysis and the agent’s cheating history. It then gives each review a grade out of 100 as to how likely it is to be fake.

After this, a moderator then goes through each review, scouring social media and electoral roll data to try and verify the reviewer is a real person and any possible relationship they may have to the agent they are reviewing.

The third and final check is to write to the reviewer of any that are believed to be fake, asking them to prove that they have been involved with the agent. Failure in this results in the submission being marked as ‘fake’ and not allowed onto the site. Pretty comprehensive, wouldn't you say?

I don’t really buy into the idea that one bad review is worth ten good ones. I can see the argument for it, but if you have an agent with 25 excellent reviews, 15 goods, three averages and one really bad one, I just don’t understand how anyone would take from that that the agency in question is useless.

Another criticism also levelled against these types of websites is that people shouldn’t be basing such a big, life-changing decision on the strength of reviews alone. Well, yes, I agree, but that's not what these websites are for. They are there to help vendors narrow down their shortlist of agents based on the opinions of other people.

If an agent has poor reviews from a wide range of customers, then people will know it’s probably best to avoid them. Where TripAdvisor has helped to improve the standards of the hospitality industry so agent-rating websites can drive up the standards in estate agency.

Agents needn’t be fearful of reviews and should look to embrace them instead. If you see it as a positive thing rather than a negative, the rewards are there. More engagement, more accountability, better levels of customer service, and staff can be incentivised too – get a good review, you’ll get money and kudos, get a bad review and you’ll be penalised.

Another site, aimed at buyers rather than sellers, Property Detective helps users to review an area rather than an agent. A great tool for those looking to purchase property all over the country, you simply put a postcode in and it gives you information on things like crime rates, local amenities, leisure activities, schools and noise pollution on any area in England and Wales. It gives you a ton of facts, all in one place, at the click of a button. Review.place, which has a website currently under construction, will offer something similar.

Once again, innovation and tech being used to give people more choice, more freedom and more information.

Until next time…when I’ll be taking a closer look at content sharing site Propertyflock.

Odds are that you use TripAdvisor when you book a restaurant...

It’s nearly June – June! – already. Seriously, where has this...

Property Natter – catching up with The Singing Estate Agent ...

In this latest Natter piece zoning in on independent agents doing...