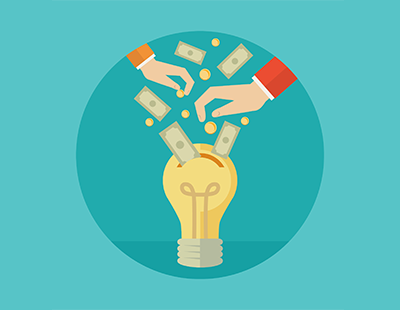 An interesting story caught my eye a few weeks ago. A man from Lytham St Annes in Lancashire attempted to sell his home on Facebook, offering a cash incentive for people who shared the social media status with friends.

This came after Josh Hocking grew increasingly disenchanted with his agent's failure to find a buyer.

Hocking had previously used Facebook to source a tenant for an apartment he owned, so he decided to try the same trick twice when it came to selling his property.

His sales pitch was a bit different from the norm – much more, how should we say it, informal and to the point!

“Okay! So after the huge success of putting my apartment up for rent on Facebook, I have decided to see if anyone wants to buy my Lovely house!  If you share this status and I sell the house (from your share) I will pay you £1000! It's 2 bedroom, located on Headroomgate Road in St Annes!”

In the first few days after posting it had been shared over 79,000 times.

It got me thinking – is this the future, a one-off, or just the desperation of one man to get his property sold by any means?

You certainly have to admire the gumption and bravery involved, even if you think this sort of thing is unsustainable in the long-run.

It seems certain that innovative new technology will have a part to play at some point in the future of estate agency.

You only need look at Connells acquiring Hatched this week and Countrywide’s Project Shoreditch to see how things are starting to change.

That doesn’t mean every single high street agent being wiped out in one go. It also doesn’t mean houses changing hands like confetti on Twitter and Facebook.

The above case seems to be a one-off more than a long-term trend. What it does highlight is the power and instant gratification of social media/new technology. The idea that a house sale might be performed via social media would have been laughable even a decade ago.

As far as I’m aware, the home hasn’t yet been sold, although the amount of media coverage Hocking’s property has now received will no doubt help.

It also seems only fair to point out the potential downfalls of selling your home directly through social media. Filtering out applicants who aren’t serious, for example, could be a major issue.

Yes, it got shared over 79,000 times, but how many of those people would be serious, interested buyers? How many of those would actually want to organise conveyancing, house surveys, price negotiation?

These are things that an estate agent looks after so a seller doesn’t have to. While a sale via social media which misses out the middle man might sound easy and hassle-free to the consumer, we know it’s not that simple.

Something that doesn’t just seem to be a flash in the pan is crowdfunding. The evidence would suggest it’s here to stay and growing massively year by year. Put simply, it’s something that has to be taken seriously.

Crowdfunding in the internet age has been around since about 2003, but it’s only in the last three or four years that it’s really taken off.

In 2013, the crowdfunding industry raised over $5 billion globally. By 2014 it had soared to around the $16 billion mark.

And it’s becoming more popular in the property world as well, opening up property investment to a whole new pool of investors so it’s not simply the preserve of the wealthy.

Not to mention all the online agents who have used it to attempt to grow their businesses.

Crowdfunding is essentially about sourcing capital from a wide range of investors to fund a project, whether that be a new music album, a piece of technology or investment in a property.

Social media has helped to bring crowdfunding into the mainstream, with the low entry levels for investors’ part of its appeal.

Property crowdfunding has allowed investment to be taking place all the time, all over the globe, at the click of a button. The process is also much faster – we’ve seen a few stories in our publications recently about London flats being sold via crowdfunding in just over 30 minutes!

Of course, property investment doesn’t come without its many risks, but crowdfunding does seem to be opening it up to a wider pool of people than would have previously been thought possible.

Property Partner and The House Crowd are leading the way in the UK, with the latter platform pitching to the investors on Dragons’ Den earlier this year (albeit unsuccessfully).

Crowdfunding, in some shape or form, has been around for donkey’s years. Donations funded many medieval cathedrals, while the iconic Statue of Liberty in New York was built with funds raised from a wide number of donors and a successful newspaper campaign.

The new version of it, exploiting social media and innovative technology, looks like it is here to stay for a very long time too.

My own thoughts on crowdfunding are a bit conflicted. On the one hand, I tend to agree with James Caan’s old adage: “if everyone is following the crowd, go the other way.”

On the other hand, crowdfunding is a great way for people to board the property train before the opportunity has been missed and someone else takes advantage instead.

We all know that banks are much stricter these days when it comes to lending, so crowdfunding is an excellent alternative to traditional investment paths. It’s also a great way for start-ups and fledgling companies to accrue funds. raterAgent, for example, has raised just over £134,000 through Crowdcube.

Speaking of social media, I was interested to see a recent study by Igniyte which found that property companies are the least likely to have a social media policy in place for employees. It also revealed that 1 in 5 property employees wouldn’t be happy to promote their company through their personal social media accounts.

This further highlights the need for property firms to have a solid social media strategy in place, something we’re big on at Angels Media. It’s too big these days to be ignored. And, as I’ve argued relentlessly over the past few months, a social media presence is a great way of driving traffic to your website, increasing your chances of converting that traffic into vendor and landlord leads.

At the recent Prop Tech conference, I met the guys from Estate Apps, a digital creative agency for the UK property industry. We followed this up with a meeting this week and it’s definitely worth checking out their nifty little website.

In other news, here’s our Advertising Sales Manager carrying the weight of the sales team. 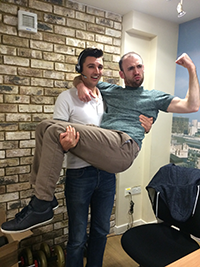 I’ll leave everyone else to come up with an appropriately witty caption!