Instagram (or, as the younger generation would have it, Insta) is, by any measure, massive.

Only launched in October 2010, it’s a virtual toddler in the already young lifespan of what we know as social media.

The photo and video-sharing social networking service (acquired by Facebook in April 2012 for approximately $1 billion) has, however, witnessed rapid growth.

In fact, it’s been meteoric – from 1 million users in December 2010 to 600 million by December 2016. The most recent figures from Statista found that the network had reached 1 billion monthly active users (as of June 2018), up from 800 million in September 2017.

It counts itself as one of the most popular social networks worldwide, particularly among teenagers and millennials. In the US, more than half of Instagram’s user base is aged between 18 and 29 years old. This holds true globally, too, with 41% of users aged 24 years old or younger. Overall, 90% of Instagram users are younger than 35.

In the UK, as of January 2019, 24 million people use Instagram on a monthly basis, making it one of the country’s most popular social media platforms.

Globally speaking, 60% of users log in daily (the second best engagement after Facebook), the biggest demographic group is males aged 18-24 and more than 40 billion photos have been shared since launch. Brands and celebrities have enthusiastically embraced Instagram, with the most followed person currently Cristiano Ronaldo with a barely fathomable 152.6 million followers.

It has spawned influencers, courted controversy, led to millions of photos being taken of dinners, cocktails and brunches, and helped to create a number of words that have now entered the lexicon – Instagrammed, Instagrammable, Instagramming, Instagram-friendly, etc.

But, while Facebook, Twitter and LinkedIn have largely been embraced by agents, the power, reach and influence of Instagram doesn’t seem to have been utilised in the same way. Could agents be missing a trick by not jumping on the Insta-bandwagon?

Some might see it as more of a social platform than one which holds any value from a marketing perspective, but the same thing was once said about Twitter and Facebook, wasn’t it?

This could, though, be starting to change. According to Steph Rady, Angels Media’s Head of Marketing and PR, Instagram is on the up and up with agents. Thanks to the closure of Google+ (set to shut down for good in April 2019), we’ve now received more requests from clients wanting to get on Instagram and receive the benefits it provides.

While Instagram appeals most to a younger crowd, its ease of advertising (just a click of a button on Facebook) and popularity among millennials is causing more agents to take notice, particularly those who deal with a large number of student or lettings properties. Given the large number of younger people who rent homes in the UK, having a visible presence on a medium they use frequently is surely a no-brainer? 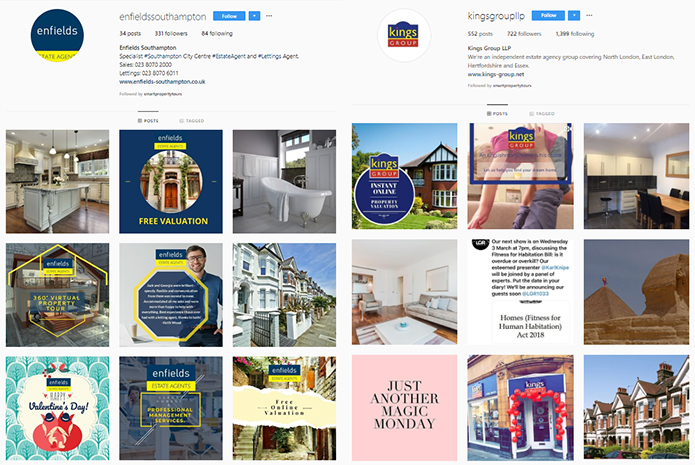 But it’s not just great for lettings. It can be an equally good place to advertise sales properties for likes and brand awareness. Currently, it tends to be the more daring, forward-thinking agents who are on Instagram and making the most out of it, but Steph predicts that this platform will be almost as big as Facebook as the generation using it (20-35 year-olds) gets older.

Generation Y and the generation after it (known, funnily enough, as Generation Z) have grown up in a technology world, with those born in the early 2000s particularly tech-savvy as they’ve never known anything different from superfast broadband, smartphones, tablets and the overwhelming presence of social media. 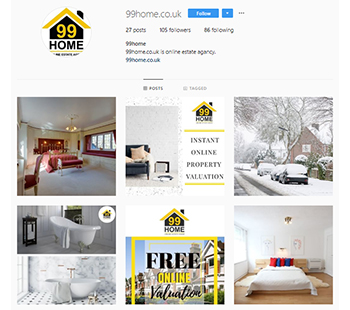 They now expect to be able to do most things online. And, in years to come, when big portions of Generation Y and Generation Z are buying and selling properties, there is every chance they will want homes to be advertised on their favourite social media platforms for added convenience. These are the buyers and sellers of the future and surely the ones agents should be looking to target in any way they can.

Agents who take the plunge now could be the ones to experience excellent rewards in the future. 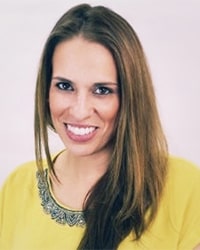 “Only recently we’ve been optimising our Instagram account with the purpose of brand awareness and exposure,” she said. “As a platform we have found that it is beneficial for gaining visibility and reaching our community, and that’s where we have seen an increase in engagement. We have had success in utilising Instagram tools – for example using Instagram stories and posts to share our success and team achievements.”

“In regards to property marketing, although we have posted new and available properties, our Instagram audience doesn’t seem prepared to engage with these posts,” she added, saying that a downside to using this platform is that it’s not currently possible to track conversions from Instagram posts to people visiting an agency in branch.

“Hopefully, with the constant growth of tools and technology, we as an industry will move towards an era where online video property viewings/or live stream will become a norm.”

Social media and the housing market

The growth of Instagram as a place to advertise homes also taps into a wider trend for the melding of social media and property, best shown by certain online agents attempting to sell homes by carrying out viewings on Facebook Live, as well as Zoopla and OnTheMarket supplying lettings listings to Facebook Marketplace.

That said, Zoopla withdrew its 300,000 listings from Facebook Marketplace in December 2018, only three months after putting them on there. At the time, a reliable source told Letting Agent Today that the U-turn had been made in a bid to protect the interests of letting agents, with worries that individual landlords and property owners using Facebook Marketplace could dilute the impact of agents' listings.

So, while social media is set to have an increasingly important role in the property industry in the years to come, it’s unlikely to be entirely plain sailing.

However, Instagram - despite the recent negative headlines it has generated - is an incredibly powerful medium which isn’t going away anytime soon. As an agent, it may be in your best interests to make use of it – and its unique appeal to younger people – to grow your business.

Some will argue that Instagram’s USP of allowing people to filter, perfect and jazz up images posted on the site could mislead tenants and purchasers by giving them an unrealistic version of the home they are looking to buy or rent, but to a certain extent that already happens. Photographs are carefully taken to show a property off, to lure people in with the best angles and shots. Instagram just takes that to the next level.

Akilah Harper, Social Media Manager here at Angels, has come up with what you should (and definitely shouldn’t) be doing to make the most of your Instagram account.

- Be consistent! (with regular posts)
- Engage (like, comment share, follow - other businesses and your followers)
- Treat hashtags like a friend
- Use your stories and IGTV
- Use the best images possible (high-res and nice composition)
- Take candid behind-the-scenes shots (makes you more human)
- ALWAYS have a business account!
- Advertise! Advertise! Advertise! Spend money to make money
- Offer stuff. Giveaways are awesome!
- Do go live!
- Be funny and fun

- Low-resolution images
- Inappropriate content
- Offending people (it’s a minefield out there, but politically correct is the way to go)
- Shaky videos
- Uninspiring captions
- Flood your timeline with similar things all at one time – you will be unfollowed! Choose only the best photos/content to upload

There we have it. An Instagram-friendly approach could make all the difference, so get Instagramming!