More speculation has swirled around the future of Emoov as it appeared that company chief executive and founder Russell Quirk had set up a new business in September.

According to documentation sent to Estate Agent Today, a firm called Russell Quirk Ltd was set up at Companies House on September 24, with a trading address at Brentwood - this is where Emoov itself is based. 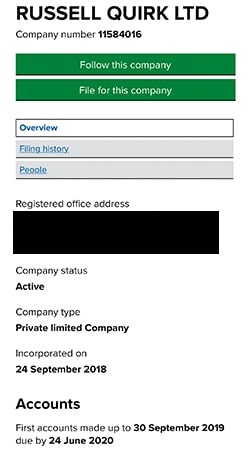 The Companies House registration says the new firm’s first accounts would be for the year up to September 30 2019 and should be filed by June 24 2020.

Estate Agent Today has not been able to confirm whether the new company has any bearing on Emoov's future but Russell Quirk has been asked for his comments.

Meanwhile tomorrow appears to be the next deadline for determining the future of the troubled online agency.

An email sent some days ago to the agency's staff by national sales manager Jack Malnick, who joined the company only this year, asks them to work as normal.

The note, forwarded by an insider to Estate Agent Today, goes on to say: “Please come in, please keep working and let’s see what next Friday looks like when we get there - it’s our best chance.”

Well-informed sources within the company have previously claimed as many as 10 parties were interested in buying, although none has been named and so far no deal appears to have been struck - although it is known that discussions continue behind the scenes and that Emoov appears to be operating as normal.

On top of all that there is now criticism of the deal announced in the spring in which Emoov acquired rival online agency Tepilo and online lettings platform Urban.

At the time Emoov claimed the deal was worth some £100m, a figure which gained currency in mainstream and trade press reports of the move.

But now Mike Day, the respected agency consultant who runs Integra Property Services, has written in The Property Chronicle: “As I write, we are seeing the newly merged group of EMoov, Tepilo and Urban hit the buffers when only a few weeks ago it was lauding itself as a £100 million business (but seemingly without the £100 million).”

“Chief executive officer Russell Quirk is currently blaming everyone but himself and their business model for its issues, in particular that monies expected from Tepilo failed to emerge. It is not quite clear who handled the due diligence in this merger but I would have expected rather more than an IOU on the funding arrangements.”

Day says he expects the company to enter some form of administration with a deal done that sees the business able to move forward, having largely cleared its decks of debt.

“It will re-emerge fleeter footed and ready to relaunch itself on the public” predicts Day.

The chief executive of Emoov, Russell Quirk, has suggested that the...