Propertymark, the overarching body aiming to bring five different associations (ARLA, NAEA, NAVA, ICBA and APIP) into a single brand, was launched in February 2017, but has perhaps struggled since for the identity and purpose that umbrella organisations usually have.

Many people arguably still associate NAEA and ARLA as being separate entities, with their own clear ways of doing things.

However, in September last year, Propertymark announced its first overall CEO – a newly created position seemingly designed to give the Propertymark name added authority and cut-through – with Tim Balcon, a 20-year veteran of membership and sector organisations, taking on the role.

In this exclusive interview, Tim’s first with the industry, we explore why he’s the right man for the job, why RoPA won’t diminish Propertymark’s status and why Mark Hayward is now staying on for another year in the role of Chief Policy Adviser. 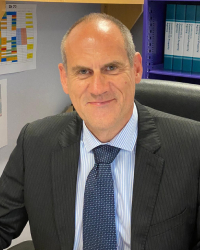 Tim is now in his twenty-first year of leading member-led professional bodies. His back catalogue of roles is certainly an impressive one.

It started out with the position of CEO at GWINTO – a membership organisation established to equip the gas and water sectors with better qualifications and training infrastructure. It was a new body which grew from an income of £400,000 to £7 million per annum in a two-and-a-half year period.

It was also instrumental in the development of the Gas Safe Register – previously known as CORGI – which Tim says was similar to the Regulation of Property Agents (RoPA) working group in its goal of improving and regulating the industry.

GWINTO was originally focused just on gas, before a merger with a similar type of organisation to cover gas and water. This was the first time Tim had taken charge of a sector – water – he didn’t previously belong to.

After three years there, he followed this up with nine years at Birmingham-based membership body Energy and Utility Skills, which led the strategic development of workforce skills for the Electricity, Gas, Water and Waste Management sectors.

Next up, and the role he held until he joined Propertymark, was as CEO of IEMA (Institute of Environmental Management & Assessment), where he says he led the body’s transformation into sustainability and its subsequent year-on-year membership growth.

“It was a declining body with no credibility when I took over, but we made sure it slowly improved and found its voice,” Tim says.

Tim believes his background in high-profile leadership roles gives him the experience, connections and knowhow to take on the challenges of the CEO position at Propertymark, even though it’s an industry he hasn’t been involved with before.

It’s hard to argue with someone with that level of experience, who has successfully moved through different sectors in his time as a CEO. He has also always been involved with member-led bodies where training, skills and regulation are vitally important – all of which he’ll need to call upon in his new position.

The main goal of Tim and his team is to professionalise the sector, to give the property market a single professional voice it has perhaps been lacking. Training, qualifications and high standards will all be hallmarks of his agenda, he insists.

Speaking as one profession

Until now, NAEA and ARLA have very much been separate entities with separate leaders, even since the launch of Propertymark. In the Hayward/Cox era, they had very distinct identities, even if - like all trade bodies – they weren’t immune from criticism from their members at times.

Why, then, the desire to join them under one chief executive with no property industry experience?

“It’s important to remember that it’s not just ARLA and NAEA – there’s also NAVA and the other bodies we represent. We want to speak as one profession – as property professionals – to force changes to government policy, to the high street, to digital.”

At the same time, he adds, ‘we don’t want everyone to be the same’. Some people will require more training or more skills, others may require guidance on regulation.

But, when it comes to being a mouthpiece for the property industry as a whole, speaking as one is probably likely to get a better response from those in the corridors of powers, rather than many different voices all fighting for space.

What, though, would persuade estate and letting agents – and other property professionals – to join Propertymark rather than, say, the Guild?

He also points to the recent wins Propertymark achieved during the pandemic, which other bodies with less of a relationship with the government may have struggled to achieve. This included a win on business rates, which saw Propertymark convince the government that estate and letting agents should be counted as retail and thus offered the same relief as retailers.

Propertymark lobbied the Ministry of Housing, Communities and Local Government, MPs and peers, as well as writing to the Chancellor, the Business Secretary and the housing minister to urge the relief to be extended to property agent offices. Its members were also a major part of the campaign, with many writing to their local MPs demanding action.

As a result, Tim says, agencies were saved from paying around £210 million.

On individuals, he points to the campaign to include commission as part of an agent’s salary. As a result of a Propertymark campaign, the government amended the eligibility criteria, allowing agents' commission payments to be included in claims for furloughed pay.

While RoPA’s recommendations are still firmly on the backburner because of Covid, Brexit and various other things - with RoPA chair Lord Best recently telling me that he fears it’ll be another two years before the proposals become law – they are very much on the horizon, and appear to be a matter of when rather than if.

One of the main proposals is for a new regulator, which could supersede Propertymark’s existing codes of practice and as a result diminish its status.

Tim disagrees. “It’ll be the other way round. RoPA is a minimum standard. You should always work from a standard, not to a standard. The RoPA recommendations will actually drive people to our membership, because we have the set-up and facilities to help them with training, qualifications, compliance, etc.”

Recently, the irrepressible Russell Quirk was on London Greek Radio with Mark Hayward – the outgoing boss of NAEA Propertymark, who is now staying on as Propertymark’s Chief Policy Adviser – and quizzed him on why the body had recruited a CEO without property experience.

After the show, Quirk was starker in his criticism. “Propertymark haven’t explained why member agents are now paying for two leaders on substantial salaries,” he said. “Hayward has been retained to form policy but surely that’s part of a CEO’s job.”

He added: “If Balcon isn’t able to do that because of his non-property background, why hire him? Before Balcon arrived, I said it would be a mistake to bring in a non-property person and lo-and-behold Propertymark have had to persuade Hayward to stay on to help get up to speed.”

“I think Propertymark are increasingly in danger of looking irrelevant, mediocre and too often just invisible to the public and agents; it needs modernising, some teeth and its ‘old school tie’ image renewing.”

When I asked Tim why Mark Hayward was staying on for another year, he said there was no conspiracy or ulterior motive – claiming that it was a purely pragmatic move to take advantage of Hayward’s strengths: his skill at influencing government, his existing relations with politicians, and his experience.

As Hayward said on the radio phone-in show - hosted by Kings Group’s Karl Knipe - he was staying on to help his new boss ‘shape policy’.

“My access to government and industry experience means it was felt that during the transition period I might be of value,” Hayward added.

Tim says having someone to help shape policy is nothing new. “It’s common in most member-led bodies. Different senior figures working together.”

And what does he think of Quirk’s criticism about him not being cut out for the job because of a lack of property experience? Tim points once more to his CV. “I bring 20-plus years of developing standards and accreditation in member-led bodies, in different sectors. I have a track record of delivering and leaving organisations better off than when I joined.”

Lastly, I asked Tim what the short and long-term plans are for Propertymark.

“In the short-term, it’s support for our members through these still difficult times. We’ve received good praise and feedback during the pandemic for our responses and reactions to situations. We ran 3,100 online courses, had 30,000 people on our webinars.”

Long-term, he wants agents and property people to be held in the same esteem as lawyers and other well-respected professions.

“When I got the job, I walked up and down the high street, looking into agency windows, and thought ‘do I view them like I do, say, a solicitor?’ I want to professionalise the sector to a point where that is the case.”

For now, the body’s 64-strong staff are all working from home the vast majority of the time, adapting to the ‘new normal’ successfully. The office is open, but only for when it’s absolutely necessary.

“It’s a very different world out there. And we all need to move with the times, to ensure we are resilient.”

In this Natter we have an exclusive interview with David Cox,...