Cast your mind back to July 2008 – Gordon Brown was Prime Minister, the Euros were in full swing in Austria/Switzerland (with England nowhere to be seen thanks to the wally with the brolly), the full effects of the financial crisis were taking hold and Dizzee Rascal and Calvin Harris were topping the charts with Dance Wiv Me.

Quite a lot has changed since. Back then, Donald Trump was still busy firing people on the US version of The Apprentice, social media was in its infancy, Uber, Deliveroo, Tinder, Spotify and Instagram didn’t even exist yet, online publishing was far from the behemoth it is today, you could still buy pick ‘n’ mix in Woolworths and Brexit wasn’t even close to being a word.

It was also a momentous year for property, with the founding of Zoopla in January and the birth of the very site you’re reading this piece on – Estate Agent Today. On 1/7/2008 the first ever EAT newsletter was sent out and the start of the journey to educate, inform, entertain and assist the property industry had begun.

At the start, the newsletter went out on a weekly – rather than daily – basis and was a combined EAT and LAT (Letting Agent Today) affair. We soon separated the two publications due to the volume of news in the lettings/private rented sector, which has mushroomed in recent years. This has been driven by the boom in buy-to-let, the massive growth in the number of people renting and the increasing rules and regulation introduced by the government – from Right to Rent to a 3% surcharge on additional homes – to try and keep check of the industry.

The newsletter was emailed weekly on Thursdays to 16,000 estate, letting and managing agents, and was also accessible online – much more of a novelty in those days. Now, of course, so much of our news is consumed online, but in 2008 this wasn’t so much the case. Trade magazines and print publishing were still the dominant party, but the crunch (which hit a lot of businesses very hard) and the rising demand for instant gratification – people wanted their news and they wanted it now – soon meant printed mags were in trouble.

The only other alternatives to EAT in those early days were the printed mags, like The Negotiator, where the news only came out every two weeks – by which time much of it was old news. In the same way the internet has largely seen off local newspapers and has massively reduced the circulation of the major dailies, it did for printed trade mags too. Their loss was our gain, however, as we were quickly left as the No 1 trade title for agents.

How did it all begin?

The idea for a dedicated news site for the property industry originally came about from a newsfeed we used to run for agents, mortgage brokers and IFAs through another property and finance-related website. We didn’t do much with it, but when we looked closer we realised that we were getting 3,000 reads a week and saw, crystal clear, the demand for regular property news. Nowadays EAT gets over 50,000 unique page views per week!

Introducer Today, aimed at mortgage brokers, was actually born first in 2006, but was of course a more niche publication. We saw EAT as something with much more mainstream and widespread appeal, although we had no idea at the time that it would grow into what it has.

In those early days, our subscribers were made up of around 10,000 agents and 40,000 brokers/IFAs. As our focus has changed, EAT and LAT have both grown considerably as property has become a bigger news topic than ever and the balance of our subscribers is now weighted in favour of agents over brokers/IFAs.

Originally news was put up on our website three days a week, which also included some features, games, competitions and EAT TV (which we revived a few years ago with our weekly news round-up). We were focused on independent, impartial news – without fear or favour – as well as bespoke features, business advice, market analysis and comment. It’s much the same ethos we still employ today.

If, in those early days, we had any concerns about getting people to read property news online, we didn’t need to worry. The timing was perfect, as it turned out. People didn’t realise it, but as I said above the demand was there for instant gratification.

Our first editorial director was Rosalind Renshaw, well known throughout the estate agency industry and at that point the long-standing editor of trade journal The Negotiator and a section editor at The Times. She oversaw our news output until the start of 2014, when respected journalist and self-confessed property anorak Graham Norwood took over as editor of both EAT and LAT.

While EAT was published five days a week from early on, we didn’t start sending a daily newsletter until much later as the demand for regular news became much greater. As rolling news has become more of a thing, we have sought to keep up with the times with newsflashes and breaking news bulletins, to ensure our readers are kept updated at all times. 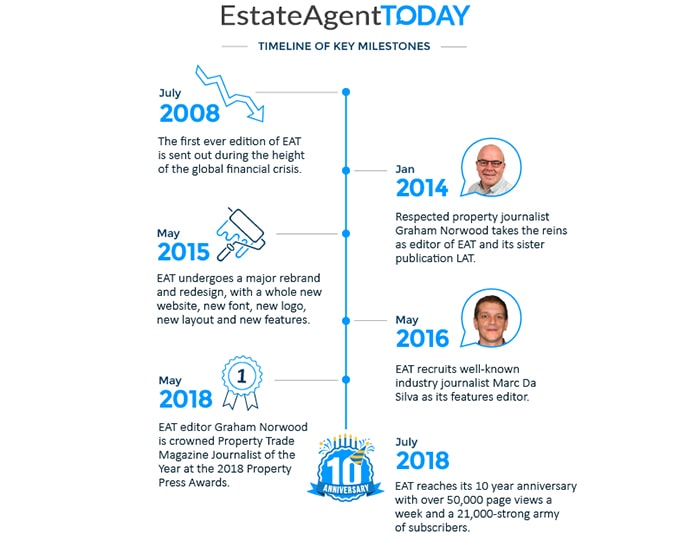 What’s in a name?

The name Introducer Today – our very first online publication – was inspired by USA Today, the American daily aimed at a middle market readership. To keep consistency across our brands, we decided on Estate Agent Today and Letting Agent Today, and later other publications such as Landlord Today (which has 100,000 landlord subscribers) and Property Investor Today. Snappy, memorable, evocative and, best of all, easily shortened to various acronyms: EAT, LAT, Intro, PIT, LLT, etc.

As for the colour choice…well, I just like blue! And that soft blue colour is easy on the eye while also being bold and distinctive. We’ve experimented with a number of different colours and colour combinations throughout the years – we started off with a combo of green and dark blue – but we now believe we’ve settled on something classy, stylish and authoritative.

Since the start we’ve constantly been evolving our sites to innovate, keep up with the times and create new trends. We’ve added various features – a rolling news ticker, special features, 60 second interviews, video content, etc – and embraced social media in a big way, but we’ve always kept daily breaking news at the front and centre of our site.

In 2015 we decided to carry out our biggest rebrand to date – creating a whole new site, with new logos, new font, new layout, new format and new features to stay fresh and relevant.

Like all things, EAT needed a refresh, and we needed to keep pace with a rapidly changing industry which was increasingly embracing technology and online solutions. We also needed to be in a position to report fast on the portal wars (the major news story of 2015) and the other major news stories that have broken since, from Brexit, snap general elections and Trump to Countrywide’s troubles, major mergers, the growth of Purplebricks (and all the controversy that’s caused) and the various new regulation introduced and housebuilding pledges made by the government in recent years.

Talking of social media, it’s a great source of pride that EAT has some 32,000 followers on Twitter (no mean feat) and that our editor Graham Norwood has more than 21,800 followers on his personal Twitter page. It allows us to be a major influencer, to set the tone and agenda, to get news out to a wide audience in a fast, often instantaneous way. From the start we were advocates of social media, encouraging agents to embrace the social web and ‘join the conversation’.

Sure and steady progress

When we sent the very first ever newsletter we watched the page loads coming in – mainly to see if the thing was going to work! We kept ‘f5’ing’ and genuinely couldn’t believe how many visitors came to the site. Since then, it’s been an upward curve – and a steep learning curve at times – and we’ve also encouraged some competition in the form of other online property trade publications.

There is Property Industry Eye, of course, and The Negotiator, but as they say imitation is the best form of flattery and we’re proud of how far we’ve come in the last decade.

All agents and anyone else interested in property have come to expect online estate agent news; it’s become part of their day and something to keep an eye out for. If it was gone, they’d be left wanting. It’s by now become an industry standard to sign up to get an email newsletter and read the biggest stories affecting 'you' first thing in the morning or throughout the day, interacting with other like-minded (or not so like-minded individuals) in the comments section and using the news to stay up to date with what is going on and how you need to put this into practice.

EAT started all that. We were the trendsetters, changing the way agents consume trade news in the UK for the better. Of that, we can be immensely proud. At Angels Media we now have a great team of 30+ people all helping the websites – and our various other services – to run smoothly. As EAT and LAT have grown, we have grown with it.

One of the first ever headlines we went with was a survey to agents. We asked: ‘at the end of your contract with Rightmove, would you stay with them?’ Some 75% said no, it made the front page of the FT and Rightmove’s share price dipped.

Here is the story in question, back in October 2008.

The future and the challenges

There’s a huge amount of publishing products out there and, as always, publishers face the balance between commercialising the operation to keep it alive and delivery against too many adverts! However, we think we have this nailed, so watch this space. Smart marketing is the key: working out when people want to read news and what kind of news they want to read.

So, there we have it, a decade of EAT. A chance to toast the success we’ve had so far, but we certainly won’t be resting on our laurels, with new (and returning) features being introduced and constant evolution and innovation to give our readers the best experience possible.

*To celebrate our anniversary, Graham Norwood has written a research article looking at the state of the market in 2008, while our panel of expert contributors will be discussing the future of the estate agency industry on Monday.

They say presentation is key (something that Theresa May now knows...

The rising phenomenon of agent-rating and review websites is a topic...