By Richard Rawlings
< Back 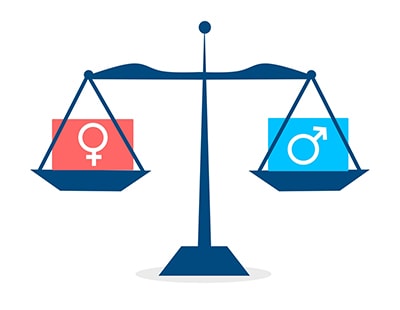 Earlier this week it was Dads4Daughters Day – a campaign that strives to promote gender equality in the workplace.

I have three wonderful daughters. Each has discovered their own strengths and capabilities and I like to think I have played my part in supporting their career choices.

Emily (27) is a Marketing Director, Isabel (18) is doing a law degree and has already secured an Internship at Goldman Sachs, and Lily (14) knows that she can pursue whatever direction she wishes when she finishes her education, hopefully unencumbered by stereotypical attitudes to women in work.

British estate agency, unlike agency in most other countries, is still dominated by ‘Men in Black’. As an industry, we are possibly among the guiltiest of all in terms of gender discrimination.

When I enter a training room to spend a day with a group of estate agents, I am always aware of the male/female ratio. Many firms are almost 100% men! Some, especially letting agents, are almost 100% female. Few are well balanced. But if it’s an open session with multiple companies represented then it’s usually 80% men. This simply does not make any sense to me. In the USA, 69% of Realtors are women, and for good reason.

As this is my article, and I’m not currently recruiting any estate agents, male or female, I’m going to take a non-PC stance and engage in some positive discrimination and identify why women can actually make better estate agents than men.

This stance is to encourage agency owners to redress the balance and hire more women in agency.

The following are of course sweeping generalisations and are sexist in their own right, but here goes anyway...

Empathy - One could argue that women are naturally more empathetic and generally have a higher emotional intelligence than men (I know my wife has!) Empathy is an immensely important trait in sales, especially when dealing with something as personal as a home.

Emotional intelligence is often the one thing that promotes a connection between agent and client, and can tip the balance in your favour when it comes to securing an instruction, especially when, according to my own research, 69% of first marketing proposal meetings (and 79% of first buyer meetings) are with a woman.

Is it just me, or do men so often go in for the kill too soon, before having earned the right to the client’s business?

Relationship focus - In an age where technology is improving efficiency, the ability to build relationships is the one thing that can’t be outsourced digitally.

When other agents are only modernising, the smart agents are also investing in relationship development and, by default, the recommendations stimulated by enhanced customer loyalty.

Trust - There are 22 times more men than women in prison. Perhaps it would not be unreasonable to suggest therefore that women are less likely to rip you off and are naturally more trustworthy.

Multi-tasking - My wife tells me she is much better at multitasking then I am. She’s right of course, and many of my male friends would agree that women are able to juggle more balls in the air at once than they are.

What a great attribute when it comes to handling multiple buyers, sellers, offers, etc. I used to argue that I was alternatively very focused on one thing at a time, but my wife reminded me that multitasking is actually being able to focus on several things at once without any decline in quality.

People who are good at multitasking are generally better at making decisions too, as they can weigh up multiple considerations and are less impulsive.

Motivation - In my experience, men are more guilty than women of bravado; that is working for effect and applaud than genuine productivity.

In meetings their words can be for effect and display (peacocking) whereas a women is more likely to speak with greater sincerity.

Longer term - Research (Sallie Krawcheck CFO of CitiGroup) shows that women are better than men at taking a longer-term perspective. Whilst a male agent might focus on the job in hand, his female colleague might be considering it in the wider context of the business as a whole, which might reveal other opportunities, not least cross selling of financial or legal services.

It’s no coincidence then that, according to the National Association of Realtors, in the USA at least, the most common previous careers of top performing female estate agents are nurses, teachers and air stewardesses. Think about it…each of these roles requires a highly personable and sensitive approach most of the time, but when push comes to shove, the additional ability to act with authority, control and the ability to persuade under pressure!

Other research has found that teams which involve women are more intelligent than teams made up of men alone.

I’m probably going to get into a whole lot of trouble for these sexist generalisations, but at least the women will be on my side – (about time!)

In the meantime, the Dads4Daughters initiative is based firmly on the belief that everyone – both men and women – are responsible for the achievement of gender equality in the workplace.

I’d urge men especially to hold your organisation to account and question whether you would be happy for your own daughter to work there.

Here are some commitments you may wish to make:
-    I will stop considering particular jobs to be orientated towards males or females
-    I will judge peoples aptitude for a field on their skills rather than their gender
-    In professions which are dominated by males or females, I will mentor a colleague of the opposite minority gender
-    I will champion equal pay for equal work within my profession
-    I will eliminate demeaning gender-charged language (such as like a girl or man up) from my work place
-    I will not let men dominate a conversation in a meeting
-    I am to make it more culturally acceptable for men to fulfil their roles as modern father, primarily by encouraging flexibility for both mothers and fathers
-    I will not discriminate against a woman based on her likelihood to start a family

Many of the issues discussed are explored further in AgentMasterclass.co.uk success coaching video modules.

*Richard Rawlings is Founder of EstateAgencyInsight.co.uk and AgentCentric.co.uk which provide training and automated marketing services for estate agents

In the first Q&A Natter for a while, I catch up...

Opinion: how can the UK adapt and prepare for future heatwaves? ...

A few weeks ago, we saw widespread disruption due to record...

Expert Analysis: How safe are homes 5 years after the Grenfell Tower tragedy? ...

It’s the fifth anniversary of the Grenfell fire tragedy, but are...