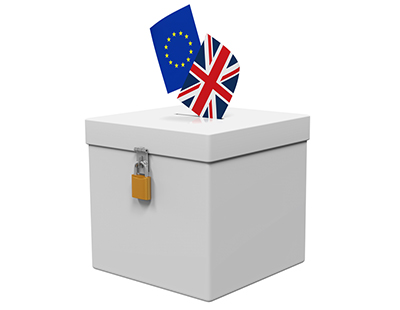 I pride myself as a logical person, so much so that it amazes me how most people seem to struggle to grasp the simplest of rational arguments.

My general attitude when I know, through logic, that I'm right,  has led to me being accused of arrogance on more than one occasion and to be honest not entirely unfairly.

As estate agents we are all used to having to apply a rational thought process to what can be and almost always is an emotional and sometimes traumatic time.

Moving house is about much more than money, or even location or accommodation. Moving makes us confront change which, even if it's really necessary, is often uncomfortable and unwelcome.

Which brings me on to the upcoming referendum and the choice we all need to make, do we want to leave Europe and strike out on our own? Or do we want to stay in and accept the many interferences, compromises and imperfections that will entail?

The first challenge we all face is to get the facts. For example, the leave campaign has made a big deal about immigration, they say that if we go out we will have less immigration because we will control our borders.

The trouble is immigration is such an emotive subject, especially when you have terrified people running for their lives, trying to escape war torn madness.

This kind of economic immigration is far less emotive and there has been no real open or honest discussion of its pros and cons.

All immigration has been placed in the same box and the implication is that if we leave Europe there will be less of it.

In my view, the problem with immigration is not and has never been the immigrants themselves. My family were immigrants at one time and that is also true of many people's families who will be voting to leave the EU, an irony which they may not see and certainly won't want to confront.

No, the real problem with immigration has been caused by our own social policy which in the 1970s evolved from the theory of 'The Melting Pot' where we all mixed in and became 'Multiculturalism'.

Multiculturalism was supposed to preserve cultural diversity and allow many different cultures to live in harmony alongside one another all contributing to the greater good of the wider society.

Well that didn't work, did it! The trouble is that once set in motion, these grand social science experiments are very hard to unwind, even assuming there is the political will to do so. This problem is going to continue whether we stay in the EU or leave.

Dealing more directly with immigration, here is the uncomfortable truth. After the end of the post- war baby boom, our birth rate fell so fast it left us with a massive demographic black hole which, if left unattended, would lead to a small generation of younger workers enslaved to caring for a massive ageing population.

The only way to fill that black hole was through immigration and successive governments have been compelled to do so, despite their protests to the contrary and cosmetic attempts at making it look otherwise.

This fact has not been in the mainstream press because they would rather run a story with no end than publicise the truth and risk ending the debate.

Of course there is far more to the immigration issue but so far as the decision to stay in or leave Europe is concerned, it is a moot point and we just don't know what the future holds on this issue in either scenario.

So let's move on because membership of Europe affects much more than immigration, it affects the whole basis on which our economy interacts with the world.

There are only two drivers which have lead to the creation of the EU and both are very simple. The first is economic and rests on the idea of a free trade zone unencumbered by tariffs, quotas and taxes.

Anyone who has bought anything from America will be used to paying the additional duty designed as a tit for tat because America charges duty on our exports.

This protectionist policy was in large part responsible for the Great Depression and should not be repeated. Almost everyone believes in a free market within Europe and can understand the additional economic clout it gives us on the world stage.

The second driver is politics, in the sense of political philosophy. The idea is that ultimately we are one human race and that in the end there should be a world government with one rule applied fairly to all people.

The symbol of this, the one which was meant to bridge the economic and political divide in Europe, is the single currency, the one we have opted out of to our great and ongoing advantage.

When I was at Uni I studied political theory and I always remember a lecture which dealt with the concept of the authority of the state and where it came from.

The question revolved around whether kings were given their authority by divine right or through other more pragmatic means.

But the bit which really caught my attention was a logic game, a game which seems absolutely central to the choice we have to make and far more important than the emotional issues that are dominating the debate.

The answer is if you want to be even better off than everyone else you would sign up to the contract, then break the rules giving you an advantage over all those keeping them!

This is precisely what we have been doing since we left the exchange rate mechanism and it is a strategy that has served us well and will continue to do so if we stay.

What it boils down to is that there is no point leaving the club voluntarily, we should stay, continue to break the rules and gain an unfair advantage until we either get thrown out or Europe sees sense and stops telling us what shape our bananas should be.

Every other country is trying their best to cheat as well, it's just they are less sensitive about it than us.

We should never have been offered this referendum, it's a sign of weak government – democracy has its limitations. Strong governments make these decisions for us, they act pragmatically and logically thereby protecting us from ourselves.

However, it is what it is and if you believe in logic over emotion you will like me, vote to stay.