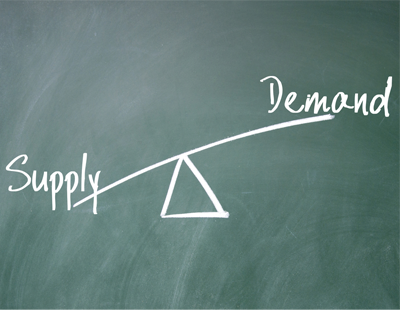 When do we really start to worry about rising rents and house prices? Despite an apparent slowdown in house price inflation in some parts of the country, the Royal Institution of Chartered Surveyors (RICS) reported the supply of homes for sale fell to its lowest levels since they started tracking the market in 1978.

Looking further ahead, the RICS forecast values will rise by 25% over the next five years. They also expect rents to increase by 3% as more households, an ever-increasing number of whom are priced out of the owner-occupied market, chase rental stock.

In the absence of a seismic shift in the dynamics of the housing market, the current pressure on stock and prices, whether for renters or homeowners, will persist for the foreseeable future.

Ebbs and flows in the market will occur, but you cannot change the laws of supply and demographics. Ignoring the inevitable differences between the various forecast sources, rents look likely to increase ahead of average incomes over the next Parliament.

Looking further ahead a Joseph Rowntree Foundation (JRF) report published at the end of 2014, written by a research team from Heriot-Watt University and the University of Sheffield, projected rents would increase by 90% by 2040, twice as fast as incomes.

This does not just gradually erode people’s spending power it has a substantive impact on the prevalence of poverty. Neither reduced spending power nor increased poverty sit well with the electorate. For this reason, if not ethics, the housing market will continue to attract political attention, whether politicians want it or not.

The obvious and well-trodden solution would be, of course, to deliver more homes. The JRF report concluded that over the long term, simply maintaining the status quo level of poverty in the UK would require us, amongst other things, to almost double our current level of house building.

However, localism and a system stacked in the favour of existing homeowners, makes it unlikely we can deliver the scale required. In case there is any question over our national homeownership bias we might perhaps think about how many planning committee councilors are renters, or the level of taxpayer support enjoyed by those of us fortunate enough to have entered homeownership in sunnier days.

Dismantling the bias will be a challenge for any Government. Few are brave enough to introduce measures that, if successful, will stall house price growth, or even send it into reverse. Given the political straightjacket of not upsetting homeowners, the more palatable option will be to make life better for renters; attempt to even the scales a little.

Plenty of economists, amongst others, will argue the relative merits of messing with a market. However, on this one, it is likely that political pressure will dictate the need for action of some sort. While those now in power, and many who are not, argued against the prospect of rent controls in the run up to the election, it seems quite possible that something will give eventually. Perhaps not this Parliament, but in all probability, within the holding period of the average residential investment.

Whether this takes some form of rent control, perhaps greater security of tenure or greater regulation can only be speculated. However, any change in the operation of the rental market will inevitably drive a performance shake out; a sifting of the robust from the marginal.

The basics of location, tenant demand, price thresholds, cost management and the like will become yet more important. This will place greater demands on the skills and expertise of agents, advisors and property managers. As ever, this will favour some over others. If it helps plan for the future landscape, then we should probably panic just a little bit.