I had a wry smile when I read the article on Monday from the conveyancers complaining about people getting off their backs. It was quite fun.

The comments were also interesting. There is a serious disconnect between both sides and it is not going to resolve itself. Each side is blaming each other.

I am sorry to say that this issue is not going to go away anytime soon, quite simply because no one is managing expectations.

• Conveyancers need time to do what they have always done.
• Estate agents don’t have time, and perhaps don’t have the visibility to rest their impatience and frustration at the process taking so long.

It is that simple. That is the frustration. No expectation management and no visibility in understanding the process from both sides.

One comment from Tim stated: “Meanwhile IT this and that nonsense is floated about as some kind of solution or 'tips for speeding up conveyancing', which in the hands of a mediocre conveyancer does nothing.”

I might add a mediocre estate agent doesn’t help either, if you view it from the other perspective -  but let's not digress.

Technology can help if systems are there to help and I know a lot of work from the government is trying to push through reforms to help conveyancers do their job, particularly around searches BUT let's look at it with today in mind.

Technology may not help completely with the process itself but it can help, I believe, with managing expectations and clearly pointing out where flaws in the process (or conveyancer) exist.

If we can offer transparency to all sides, it may lessen the frustration and may allow the agent to manage the buyers and sellers to make for a more fluid transaction with less chance of falling through.

It may also keep the agents off the back of the conveyancers. But I can’t promise.

Many, many firms focus on the quick wins of improving the transaction experience - I might even suggest the UK leads the way here given the sheer volume of companies that exist.

The ability for people to search for their next house. The ability to view the chosen few and then how to make the offer process more efficient.

Anybody can really get involved there. It is simple to understand, and easy to develop for.

Post-offer acceptance, it gets super complicated and more difficult for people outside of industry to understand what the hell is going on.

And this is the problem. When you put insecurity into the equation, it breeds frustration and concern into a transaction. Then everyone gets jumpy, estate agents get nervous of deals falling through and they put the pressure (and the blame) on conveyancers.

Two weeks ago, I mentioned the speeches I give and brought in my example of how iBuyers give ‘certainty’ to transactions.

This current argument - and it is just that - speaks to a second trend I mention. Transparency. 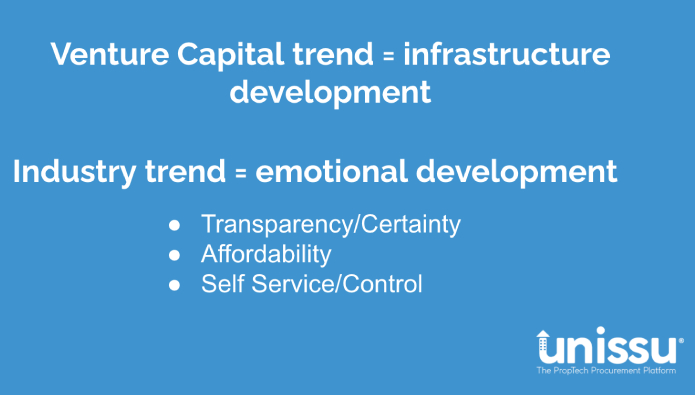 When I give these speeches, I generally try to make the companies I then showcase relevant to the audience I am speaking to. Yesterday, it was a Canadian conference and so the majority of companies were either Canadian or American.

The slide below shows some of the firms from yesterday's presentation. You can see the iBuyers there with the American and Canadian slant. Then there are those that give transparency in the transaction process.

You will note they are only British firms. That is because we have leading firms that are helping the process. We should be embracing firms like these to help streamline this difficult time to aid both sides of the market. 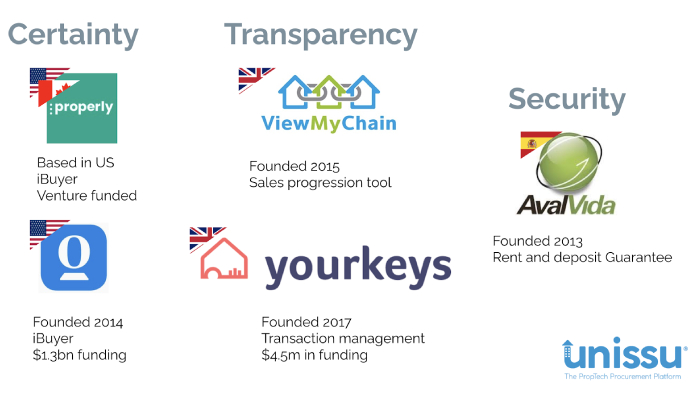 ViewMyChain I have followed almost since inception and it has done a great job. YourKeys has exploded onto the scene and made some great PR around its ability to streamline transactions to just seven days - particularly in the new build sector.

Just this week, I received an email from Emma Vigus, a long-term acquaintance of mine who stepped into the role of managing director of legal tech startup mio, “the estate agent’s sales progression platform”.

Emma, previously the chief commercial officer of TMGroup, the firm behind mio, is making great strides to help this emotional argument between both sides of the transaction.

Emma emailed to announce they had just launched the residential property chain view API which will, for the first time, mean that all parties involved in a sale or purchase can benefit from a single view of the chain.

The new API apparently “provides a sophisticated yet simple way for any third-party to integrate with mio and receive a well-designed, GDPR-compliant view of the chain”.

Just to stress, other developed nations just don’t have this sort of ability to offer transparency to both sides.

The conversation yesterday fell to issues they are having in the US around the multi-billion title insurance farce that they have to deal with (in 2006 it was already worth $18 billion, just to give you some idea of how ridiculous it is! Nowadays, people are paying up to $2,000 for this insurance in some states). Any innovation in this area has to fight with a sector that has developed around the transaction just to ensure safe title.

Emma shared a video of how mio is now working, which you can view here or at the bottom of this article.

Imagine this kind of transparency in your transactions.

We may not be perfect but we don’t have to keep p****ng each other off. Just realise we are all in imperfect times. Most people don’t have all the answers.

At least with systems like mio, View my Chain and others, everyone should know where they stand – including the customers, which should make it an easier and less stressful process.

PropTech Today: Do we need to maintain professional relationships anymore? ...

Property has always been an industry built on a foundation of...