BetterMove, registered in Swansea, is described on its website as “Britain’s only pay monthly estate agents”.

It hit the headlines in 2017 when it described High Street estate agents as “smug, suited slime-balls” in a reference on a property description on Rightmove - the agency at the time put the statement down to an error on the portal’s part. 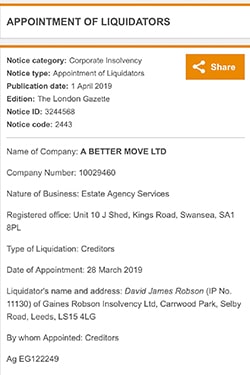 The pricing offer of the agency has varied over time but most recently it involved a basic package at £74.91p a month, with more elaborate packages charged at £83.25p and £112.08p monthly.

BetterMove also said it had “a revolutionary online management system, allowing you to be up to date at every step of your journey towards your perfect home.”

When checked by Estate Agent Today yesterday evening BetterMove had fewer than 500 properties listed, mostly at the mid and lower sectors of the market.

The news of liquidation came in an announcement in the London Gazette earlier this week.

She told ARLA delegates that while online agents had suffered setbacks and “aren’t going to destroy the High Street” they already offer “far better” customer service than traditional agencies.

She said that many online agents had never charged tenant fees so didn’t need to raise other fees now to compensate for the imminent loss of income.

Kent was then asked by the audience how her firm makes money. She said it was down to “efficiency and not driving around in branded Minis” - a remark which attracted jeers from the audience.

A sales and lettings agency which has entered insolvency is reported...