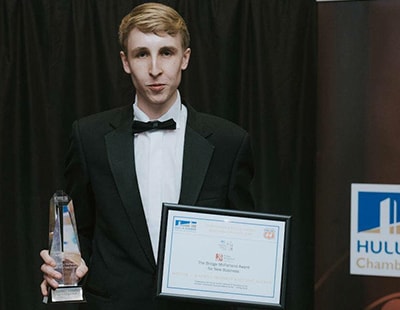 An agent who is only 20 - and who set up his own firm when he was still a teenager - has won a prestigious business award.

“When I first set it up, I had a lot of people doubting me both because I was a new business and because of my age. Over time, I’ve proved that neither of them are an issue” he says.

“I’ve had so much business over the last few months from people recommending me to their friends. Now I’ve built a reputation and people know they can trust me.”

He first worked in the industry back in 2015, helping his parents manage their portfolio of rental properties.

“I grew my portfolio of managed properties and I completed a handful of private sales. This eventually lead me to pursue my career which allowed me to officially launch the business full time in January 2017” he says.

“I believe that our USP is the service that we offer, and the way we do things. So often in estate agency many clients, landlords and tenants feel undervalued and underprivileged ... we strive to ensure that isn’t the case” says Josh, who is the sole person working at the firm.

“Being just 20 years old as an owner has many advantages. Agency is an industry often frowned upon and viewed as tired. However, I’m personally aiming to help shape the future” says the ambitious entrepreneur.

He plans to employ a staff member by the end of this year 2018, to list his inventory on Rightmove (currently it's advertised only locally and on his website) and then to acquire business premises - but his goals do not end there.

“Moving forward further, my eventual plan is to become the biggest and most successful estate agency in Scunthorpe, before I then plan on branching out and opening further offices in neighbouring towns and cities such as Grimsby, Doncaster and Lincoln and Hull” he says.

You can see Josh’s website here - and good luck to him from everyone at Estate Agent Today.

The ESTAS has announced the winner of the first ever Agent...