Baroness Diana Warwick (below right) has been appointed chair of The Property Ombudsman scheme’s independent council.

A life peer for the past 18 years, she is the current chair of the National Housing Federation and is a non-executive board member of the ension Protection Fund. She also spent four years as the Chair of the Human Tissue Authority and14 years as the Chief Executive of Universities UK, where she led the body representing the executive heads of 130 universities, both nationally and internationally. 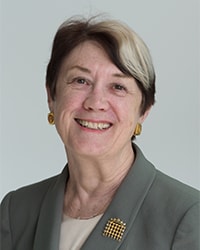 “I am delighted to succeed Lord Best in this important role and hope that the qualities and skills I bring will help to reinforce the commitment to high standards that he has fostered. I share The Property Ombudsman scheme's values of independence and public service and strongly support its purpose in providing free, fair and impartial service to buyers, sellers, tenants and landlords of property in the UK” she says in a statement.

The council’s role includes oversight of the work and protection of the independence of the Ombudsman, considering cases referred by the Ombudsman for disciplinary action against scheme members where there has been a flagrant or persistent breaches of the Codes of Practice, and protecting consumers from unfair practices.

TPO’s latest figures, as at December 31, show over 15,315 sales offices and 14,613 letting offices as registered with the scheme. “We estimate that these figures represent 95% of sales agents and 85% of lettings agents operating within the UK” says a statement from the organisation.

The outgoing council chair, Lord Richard Best, says: “I am delighted that Diana Warwick, my well-respected colleague in the House of Lords, has accepted this role. Her wide ranging experience in managing organisations of different kinds, and her deep understanding of government and parliament will be of immense value to TPO.”

Agency reform chief to speak at The Property Ombudsman conference ...

The Property Ombudsman’s annual conference is to hear from the chair...