The death of traditional TV – where viewers sit down together to watch shows at defined times – has been much talked-about in recent years.

But, despite the massive growth and increasing influence of Netflix and other streaming services – not to mention the advent of catch-up TV and easy recording – there is still a place for mainstream channels. And they can still have considerable influence on us.

But how does this tie in with property? Well, in recent months we seem to have been bombarded by a never-ending supply of property adverts on our screens, with big money pumped in by various firms to reach prime-time audiences. Which suggests that companies still see lots of value in TV advertising, where an audience of millions can be reached instantaneously.

Where else can you get that? Digitally speaking, advertising space is a very crowded marketplace – the consumer’s eyes constantly being distracted with lots of things competing for their attention. It’s the same with print advertising, billboards and adverts on the sides of public transport. You’re likely to get, at most, a fleeting glance from people before they move on, whereas a TV ad allows at least 30 seconds of a viewer’s undivided attention. (In theory, at least. They could just as easily be making a cup of tea or browsing their phones while the adverts are on!).

Still, though, the power of advertising is strong. It’s why Purplebricks has invested so much into its love-it-or-hate-it ‘commisery’ adverts to try and pierce its name into the national consciousness. It’s why YOPA has placed a key focus on TV adverts since being founded in 2015, with first The Village People ads and more recently the ‘Seriously, why not?’ series of adverts.

We’ve also had Zoopla’s recent ‘Crab World’ adverts and Rightmove’s ‘find your happy’ efforts, with the latter attempting to give a more human, intimate and personal slant to the process of finding the right home.

PrimeLocation.com’s ‘find your dream home’ ads have become well-known for their style and clever filming techniques, while OnTheMarket’s attempts to establish itself included a sweeping panoramic ad in early 2015.

eMoov has sought to get in on the action, too, with its recent Emoovment TV ads (I’ve also seen a few print ads popping up across London), while Tepilo, easyProperty and Housesimple.com have also regularly secured ads in prime-time slots.

It’s not just online or hybrid agencies, though. Savills ran a big TV advertising campaign in 2017 – you may remember the one set on a windswept beach in particular – Your Move made a big impression with this ad, and Hunters’ ‘Here to get you there’ ads have featured on screen plenty of late.

It’s hard to qualify for sure how much traction these ads get – or how much influence they have on an audience – but the continued reliance on TV advertising would suggest they do produce results. If nothing else, they are an excellent exercise in PR, keeping the names of property firms in the limelight and in the minds of consumers.

While it’s true that property TV advertising is dominated by the major hybrid/online players and Rightmove and Zoopla, the appearance of Savills’ first TV adverts in 2016 and an increased focus from the major traditional players on advertising on-screen suggests that the high street is keen to fight fire with fire to preserve market share.

Expect to see many more property-based TV ads in the coming months and years as companies compete to get their voices heard. ‘Commisery’, ‘Emoovment’, ‘Seriously, why not?’ – what will be the next campaign aiming to get stuck in our heads for days after whether we like it or not?

The Guild’s Annual Conference took place on the first day of this month at County Hall on London’s Southbank. As ever, a great, well-organised event with lots of interesting speakers and exhibitors. 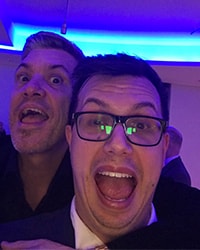 This included the claim that Purplebricks had sold just 51.6% of homes within ten months, an analysis that the hybrid agency subsequently refuted.

Afterwards followed a drinks reception and a gala dinner and awards ceremony, where I got reacquainted with Ben Marley from Feefo.

Two of our other clients, Reapit and PayProp, were also in attendance. 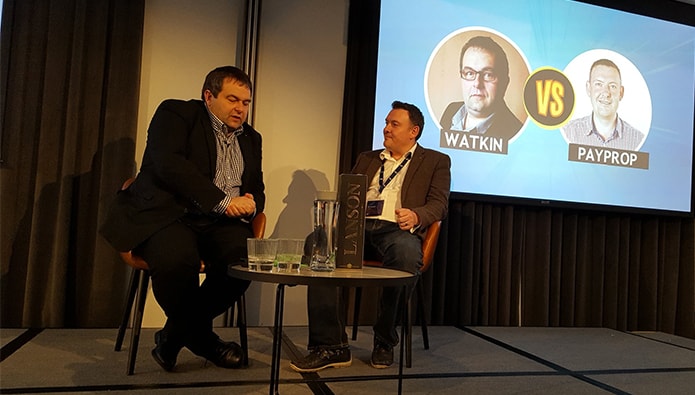 Iain Mackenzie, appointed CEO at the Guild in March last year, oversaw his first Guild conference with aplomb, while the whole day was documented brilliantly via the #GuildConference2018 hashtag.

This news piece caught my eye the other day, with a PropTech start-up raising nearly £3 million to fund its bid to change the London renting experience forever.

Homie, an online platform for prospective tenants, has now raised £4 million in total. It provides users with their own ‘Homie’, a personal home finder who searches the market for appropriate homes. The prospective tenant is then whisked away on a two-hour black cab ride, where up to ten potential homes marketed by letting agents can be viewed.

Another potential disruptor is HomeRenter. The brainchild of Sean Quinn and Jim Thomas, property entrepreneurs with a twenty-year history of delivering development schemes across London, and co-founder Will Handley, a private landlord who previously worked in marketing, HomeRenter aims to aid tenants in their rental search while also providing a permanent profile of their wider tenant history, including ratings and reviews.

While it doesn’t work with letting agents, it plans to create an Airbnb-style marketplace for the UK’s private rented sector.

Talking of GDPR, our first edition of GDPR Weekly went out on Tuesday with some brilliant experts involved. They are there to answer the questions that will give you peace of mind over anything GDPR-related.

Remember, if you have any topics you want answering, please get in touch with us (press@estateagenttoday.co.uk).

Quick reminder to our agents to join The ValPal Network’s Facebook group. We currently have 119 members (and growing daily). It’s a great place for agents to discuss any issues with ValPal and to see how they can get the most from their membership. It’s also somewhere for agents to share ideas, tips and marketing plans.

We’re also looking for agents to join our ValPal Innovation Programme (or VIP) – to test cool new stuff and cool new tech. We want to give our members what they want and need, but we don’t want to assume we know what this is. We want the concept to be proved before we roll it out, rather than the other way round.

To this end, we’ll be holding a roundtable event on Thursday 1 March to try and come up with new ideas and innovations to improve The ValPal Network for all our members.

That’s that from me…Until next time.