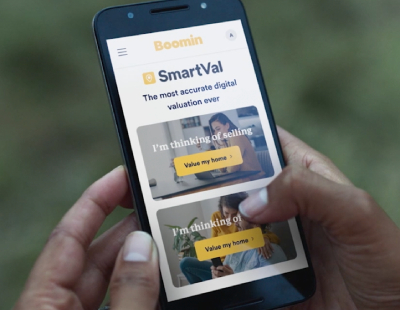 The advertisements will start on Channel 4 today and will also run on live TV, video on demand and YouTube.

As with Boomin’s ‘Good Things Happen’ campaign, the new ads will be voiced by Hollywood actor Brian Cox. The portal says the objective of the campaign is to “deliver SmartVal into the stream of consciousness of UK consumers.”

SmartVal is powered in part by The ValPal Network’s valuation tool, owned by Angels Media, publisher of Estate Agent Today.

Boomin claims SmartVal provides “a more accurate online valuation for visitors to the site with a mix of technology, data and timely interactive engagement with experienced local agents.”

Users on the Boomin website can request a SmartVal from local agents registered with the platform - those agents then have a strict deadline of 15 minutes to respond to the customer online.

Boomin insists the 15 minute period was chosen after extensive market research, and represents the optimum time that holds customers’ interest.

“The agents embracing SmartVal are at the forefront of delivering what homeowners are looking for - accuracy and engagement with a great local agent. It is a real opportunity to build a relationship with customers who would otherwise be stored away in some database in the cloud. We recommend that agents register their mobile number on Boomin so they can be the first to receive valuation requests without delay” says Tom Kirk, the portal’s chief product officer.

Michael Bruce, founder and chief executive  adds: “SmartVal aims to get agents where they want to be, in front of customers building relationships and supporting them onto the market and through a transaction. Before online classified property advertising existed, this happened naturally, with people engaging directly with agents, who were front and centre. SmartVal is about re-establishing that earlier/deeper relationship between agent and customer.”

Bruce adds that other PropTech tools are in the pipeline for Boomin member agents - including an upgraded version of SmartVal. He insists these “will demonstrate beyond doubt that Boomin is the only portal with innovation as a genuine part of its DNA.”

The portal’s latest statement cites Nick Moir of Andrews Property Consultancy who says: “As with any new tool, consumer adoption will take time, but this has the potential longer term to be transformative for our business.”

Boomin chief executive Michael Bruce has for the first time given...

Boomin’s valuation tool is the most accurate anywhere - claim ...

Agents using Boomin have managed to convert more than 20% of...