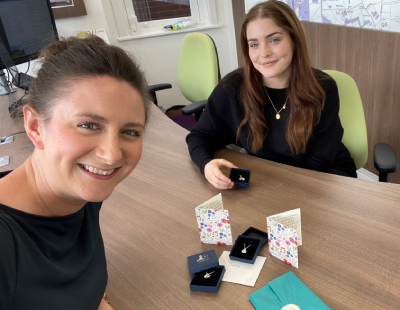 A delighted couple sent “thank you” gifts of jewellery to three staff at an agency after moving into their dream home.

The couple had already sold their former house in Malvern via Nicol & Co and were hoping to move elsewhere in the town, but just couldn’t find a property they liked.

This prompted staff at the company to generate a letter-drop to homes across the buyers’ chosen area; it prompted a positive response from a householder who was thinking of moving, and within two weeks the sale was agreed.

Erica Hinwood, sales manager at Nicol & Co, says she and her colleagues were bowled over by the gesture.

“While satisfied customers often drop in with a box of chocolates, flowers or bubbly, I’ve never experienced anything like this before. The jewellery is beautiful: a silver necklace each, with a star and disc individually engraved with our initials. We are so grateful” she says.

The buyers highlighted three homes they were interested in - none of them on the market - and the agency ensured they were included in the leaflet drop. The property that was the buyers’ absolute favourite was the one where the deal has now been done.

Hinwood continues:  “I went out to meet them, introduced our buyers, they were showed round, a price was discussed and less than a fortnight later the sale was agreed. Now the whole chain has been completed and all parties couldn't be happier.”

All out of homes – estate agent temporarily ‘sold out’ of all housing stock ...

An estate agent has been ‘marketing properties so well’ in a...

Hello and welcome to Agents Do Charity as we are on...