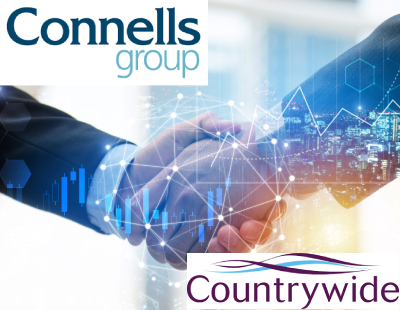 The acquisition of Countrywide by Connells might just be the deal of the century in the British estate agency industry.

That’s the view of Adrian Gill, former executive director in charge of estate agency at LSL, parent company of Your Move, Reeds Rains and Marsh Parsons.

Gill, who most recently was interim chief executive at Reapit, is one of the most experienced agency executives in the UK and has spoken confidently of the likely success of the Connells acquisition in a piece he has agreed to share exclusively with Estate Agent Today readers.

Here it is - do let us know in the comments section whether you agree, or take a different view.

In 2000 Connells ranked as the seventh largest UK estate agent and had to scramble to be allowed to invest in the four-way joint venture that established Rightmove alongside Countrywide, Sequence and Halifax Estate Agents.  Connells’ ability to spot an opportunity and then punch above their weight are traits that have led to their acquisition of Countrywide.

In a few weeks’ time Connells will complete the acquisition having previously acquired Sequence in 2003. With Halifax long gone and other corporate agents just specks in their rear-view mirror, in the 21st Century, Connells have climbed to become the undisputed heavyweight in UK estate agency.

Countrywide is a big beast, and any acquisition of that scale is risky. Connells, however have all the tools to succeed and here are my five reasons why.

The formidable pair of chairman Stephen Shipperley and chief executive David Livesey have been partners for more than 30 years; chief finance officer Richard Twigg went to Connells in the 1990s and estate agency chief executive David Plumtree joined WH Brown (part of Sequence) when he was in short trousers. And it does not stop there because Connells’ next tier of management are all longstanding high performers.

All those decades could have made Connells insular, but there’s a willingness to bringing in outsiders and they’ve filled gaps by snapping up available top talent in Gary Barker (the new chief technical officer, from Reapit) and Jon Notley (integration director, formerly of Zoopla) who can start immediately.

Ambitious Countrywide staff should be reassured if they study Connells’ history.

Connells achieved great success with their acquisition of Sequence in 2003 so we should expect the same playbook. Seven of today’s Sequence board were acquired with the business and only one board member is an implant from the Connells side. This should alleviate fears that Connells’ managers will bag all the top jobs.

2.  Clarity of focus: In the book ‘Good to Great’, Jim Collins talks about a singularity of purpose which he calls The Hedgehog Principle. Like Jim Collin’s hedgehog, Connells focus doing one thing really well - and that is winning estate agency instructions. This relentless focus means that everyone is working towards the same goal and knows what they have to do to succeed. Driving this alignment in Countrywide after the chaos of recent years will get them back on track.

3.  One plus one equals three: Connells are bolting together two very similar businesses and so duplication and inefficiencies will be eliminated to drive profit and cost savings. These will add up and some of the biggest savings such as firing the board of directors (£2.5m saving) will actually be popular. My guess that Connells will unlock £10m extra profit - and it could be much more.

For my final two reasons, I will look to external factors which give Connells an advantage over anyone else.

4.  Skipton, the secret weapon: Connells are owned by Skipton Building Society, who, unlike almost every other financial institution that have dabbled in estate agency have been successful. Why? Because they’ve backed management and not interfered. Further, as a mutual building society Skipton’s financial results are far less scrutinised than listed companies who have City targets to meet.  Corporate estate agencies are surprisingly fragile needing careful nurturing and consistent management so lurching between different strategies and hacking away at staff costs to meet arbitrary profit targets can be disastrous.  Skipton’s umbrella will shelter Countrywide from this glare of scrutiny whilst it is rejuvenated.

5.  Luck and timing: By a combination of luck and judgement Connells have acquired Countrywide during the best housing market for years. Both businesses pipelines are bulging which means that income and cash generation have exceeded expectations and Connells will get the benefit from this. Whilst 2021 has started in lockdown, housing demand exceeds supply, which is a good sign for the rest of the year. Further ahead, interest rates will remain very low, mortgages will be available and the prospects for a few bumper years for agents are good.

Deal of the Century? Countrywide plc might have been in difficulty, but large parts of the business are intact and operating cash inflow was nearly £50m in 2019. Add on £10m of savings and Countrywide will bank £60m of cash a year on top of Connells’ own profits. The deal is funded by a £285m loan from Skipton and Connells will be keen to repay this fast. Interest will will have to be paid on the loan, but again Connells have struck gold as the rate is only 2.85 per cent.

Roll forward three years and with the debt repaid, the combined Connells Group will be clearing £120m-plus each year. On a multiple of 10 times, that makes them worth £1.2 billion. Not bad. But the real irony is that if Connells had held on to their Rightmove shares they would be worth £1.6 billion on their own. You can’t win them all.

I spent the best 10 years of my career (2002-2012) working at Connells so any accusations of bias in my authorship are a fair challenge.