Hello and another Monday means PJT Day, your regular update on movers in the industry.

You know the drill by now: if there are staff changes in your firm or branch, please let us know: drop an email to press@estateagenttoday.co.uk and please include images too.

Let’s start with Keller Williams UK, which has had something of a flying start with new appointments in 2020.

The latest is former Purplebricks territory owner JP Downes who is to head the KW market centre to be called KW Pheonix, covering the Coventry and Warwickshire.

Before Purplebricks, JP was also a sales and development manager for Countrywide’s John D Wood brand. He says of his new position: “Working within the Keller Williams family – and it is just that – gives agents the tools and support to build incredible lives for themselves and their loved ones. The values really fit what I believe is at the heart of estate agency – delivering exceptional customer experience, with great results, through building personal relationships.”

The pair say that when the agency rolls out across other parts of the country, they will be looking for more agents to join the brand in a self-employed capacity.

On to Strutt & Parker now, and under the agency’s French ownership there’s been a substantial senior management restructuring.

Popular London agent and senior partner Andy Martin is to join the senior management team at BNP Paribas’ Group operation, while his previous deputy in the UK - Etienne Prongué - has now been elevated to run the combined commercial and residential property business.

Andy Martin says: “It’s been an honour to lead Strutt & Parker and BNP Paribas Real Estate through these last 10 transformational years.  The merger has allowed us to create a powerful nationwide offering across the full property lifecycle.

“Three years on, our people’s combined expertise is helping our clients to shape the future of real estate and the places we live, work and visit. I’m proud of the business we have built and what we have achieved.”

Meanwhile significant changes have been announced in Knight Frank’s Kensington office, as you may have read on EAT on Friday.

In comes James Pace, proprietary partner and head of the Chelsea office, who’s now leading the Kensington sales team.James has been in the Knight Frank Partnership since 2006 and opened the Chelsea office in 2007. 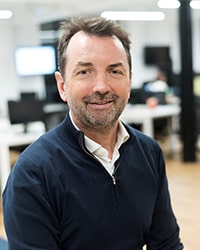 Ian, who held senior roles at Lloyds, Virgin Money, McKinsey and Accenture, most recently served as CEO of Target Group.

“The home ownership journey is one of the most stressful experiences that consumers face, yet not enough has been done to simplify the process for both homeowners and lenders. There’s a tremendous opportunity to leverage technology to transform home financing and mortgage distribution, making the market work better for homeowners and lenders” says Ian.

So that’s it for this week - keep us informed and we’ll keep the industry informed. We’re back again next Monday of course, so until then…