What an interesting few days it’s been.

I don’t think the topic of this week’s column is doing anything good for our industry. We are creating an image problem among the general public, who are already suspicious of our sector.

I’m talking about the recent talks of a merger between Countrywide and LSL. Here’s one thing I know: merging two old business models doesn’t make a good one.

It might salvage some semblance of an organisation for a period of time, but it will not be a solution. To use an analogy put forward in a Telegraph article yesterday by PropTech analyst and Unissu influencer, Andrew Stanton, Countrywide has been left a ‘financially wounded dinosaur’.

Hand on heart, who would want to work for a wounded dinosaur?

This proposed deal will simply delay inevitable extinction. Maybe not this year, maybe not next and it probably won’t be a seismic, catastrophic extinction. Instead, it will be a long, painful decline.

The deal itself will cause issues in the short-term for the people that matter. There will be redundancies, for sure. It will have a serious impact on the high street as office branches shut down. It will not be pretty.

Perhaps this is a blessing in disguise? As I have often said, there will be fewer agents in the future as technology starts to influence their daily ‘tasks’. Therefore, perhaps this merger will simply accelerate what I have been saying will happen all along.

Having said all of that, there might just be a saviour emerging for all of us. Wonderful! What great news and timing. No longer do we need to worry.

Agent & Homes are saying you could earn £200k working at a hybrid firm, according to an article published yesterday. What a fantastic coincidence of timing. And it isn’t 1st April, as one ‘Property Pundit’ has pointed out!

Let me add my comment on this, just for a second. Focusing on the financial element is wrong and I believe it entirely misses the point of this alternative business model which, by the way, is the most likely way agents will survive moving forward: be flexible and tech-enabled.

There is no way that the average agent will make £200k a year. Not possible. Never going to happen and, therefore, sorry, Graham (my super, award-winning editor here at EAT!), it’s the wrong angle to be reporting. However, I get it. Clickbait. It is the headline that gets people to read it.

**advice to self, do not be critical of an editor and then have the cheek of suggesting his article headline is clickbait-worthy – sorry, Graham**

Let's look at the alternative, non-clickbait statements made in that article which were not as headline friendly:

These centralised hubs are key (I have even mentioned before that perhaps this is what Rightmove should do next and create a home for freelance agents), and I saw this with Foxtons back in the late 90s and early 2000s with the opening of new locations,  all of which were run from central locations. It was 20 years early and didn’t work out.

Ignore the fact that the £200K headline statement is unrealistic, consider yourself a young negotiator: what model would you be more excited about at the minute? Which one would you trust with your career? Is this an easy question for you to answer?

To conclude, let me give you a short story about a speech I gave in Spain last week. I was looking at new business models and explaining them in relation to industry trends.

I was saying to the audience that current industry trends, whether we agree with them or not, are very customer-centric. They are focusing on emotional trends rather than business trends.

When I arrived at the slide below, before going on to talk about the various different businesses dealing with each section, I stated something very clearly: 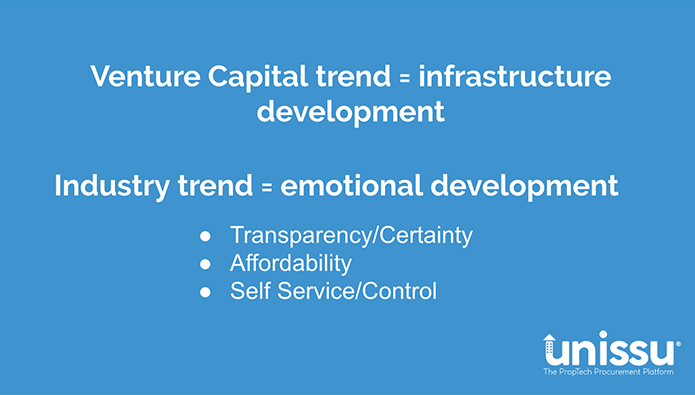 “You may not agree with me, you may disapprove of the businesses I will mention here, but you have to realise I am not advocating or recommending these businesses. I am simply saying they are striking a cord with your customer.”

Why am I saying this? The audience hated some of my suggestions for business models that are influencing the industry.

In fact, I was booed.

I showed a slide showing online agents - in particular one with a Spanish Purplebricks equivalent called Housfy. Housfy has annoyed the sector but also has a huge TV campaign suggesting all traditional agents are dinosaurs.

I stood my ground reiterating my point. This isn’t whether they are successful or not, I said, this isn’t about whether they will take your jobs, it is about your customers.

They are sending a signal that the old models aren’t working. You must work to understand why and understand these trends of control, certainty, transparency. That is the point I am making.

Ask yourself if a merged entity of two mega-brands is actually going to answer any of the industry trends or customer demands at the minute? I suggest not.

Time to make some decisions for both yourself as well as your customers.

Over 500 members of the Guild of Property Professionals have requested...