There are those who say that PropTech is at risk of becoming a bubble market, and others who say bubbles don’t exist.

Is PropTech a bubble? Or are analysts simply looking at a couple of large industry investments and choosing to see the dark instead of the dawn?

An economic bubble occurs, or doesn’t occur, depending on which economist you speak to (some believe the whole concept of bubbles to be guff), when companies within a certain industry start attracting investment values far above that which traditional metrics would deem sensible.

Why does a bubble form? Nobody can say for certain, but if we take the ‘.com’ bubble as an example, one can form when hype around emerging and mysterious sectors or innovations reaches its peak. Investors become so confident in this new sector that they plough sums of money into companies which cannot hope to justify the investment nor the subsequent valuation.

In PropTech, people are now pointing at WeWork’s tempestuous attempts to value itself, first landing on $47 billion (billion!), only to then see it slashed down to $10-12 billion.

Still, not chump change. They’re also pointing at Fifth Wall’s $400 million, and VTS’s $1 billion. They’re pointing to these events and seeing a bubble begin to form.

How can WeWork possibly justify a valuation of $11 billion, let alone $47 billion, when it’s reportedly losing money by the day?

Investors, some will say, are going nutty for PropTech, investing far above reasonable sums, inflating and inflating the bubble to the point where we might just risk it bursting.

If there is a PropTech bubble, will it burst?

If we look at the levels of PropTech investment over recent years, and then consider those large funding events mentioned above, it’s not unreasonable for some to start speculating about bubbles.

Another way of asking that is, will the investors see adequate returns? The answer is, if they’re smart enough to vet their investments before pulling the trigger, yes, absolutely.

People seem to think that PropTech is approaching its peak. This is bananas.

If we look at industry adoption, PropTech is yet to penetrate through to the core of real estate. It’s broken through the crust and started making its way through the mantle, but that’s it.

Remember the Gartner Hype Cycle? I’ve written about it plenty of times before, but it essentially dictates the journey that emerging industries or technologies take as they evolve and mature. 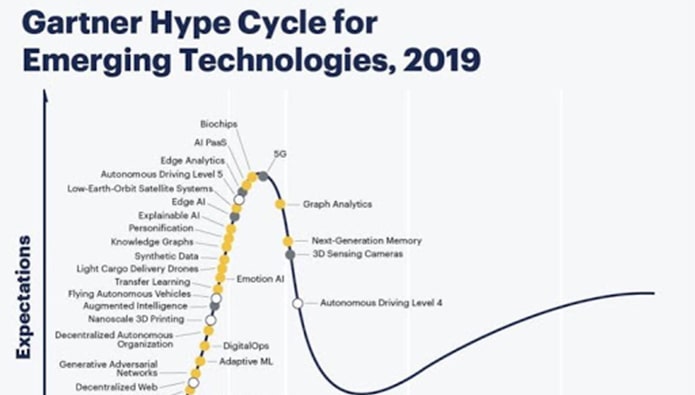 The Peak of Inflated Expectations - this is where PropTech has more-or-less reached with these recent billion-dollar valuation events (and certainly the hype surrounding them).

Expectations are so high that there is an inevitable dip on the horizon, but that’s not a crash, it’s the natural process of industry maturation.

The real estate industry is so dense with processes, sectors, sub-sectors, and cross-industry interests that PropTech’s success so far has been nothing but a scratch on the surface.

There is far more yet to be done than that which has been done so far.

But, I hear some say, was that not also true of the .com industry before it burst?

Yes, but the .com burst was the result of a host of internal and external economic factors, not just overzealous investors.

Don’t forget, this was a time when people were genuinely worried that the dawning of the year 2000 was going to cause complete havoc for computers. Interest rates were also aggressively raised just before the burst.

Yes, internet companies started burning through their investment and running out of cash, but it was a far more nuanced set of events than that.

Furthermore, the concept of so-called ‘.com businesses’ is a very broad one, it covers limitless different industries.

PropTech, on the other hand, deals only in real estate - there is great and relatively secure value in this industry. PropTech is not playing with unknown entities like eBay was when it introduced an online auction house.

PropTech is undeniably important to the real estate industry and good companies, therefore, will not run out of cash.

I say ‘good companies’ because, as I have been quoted as saying many times before, this industry does need a purge. Perhaps consolidation is a more friendly way of putting it.

Over at Unissu, we’re currently tracking more than 7,000 PropTech companies around the globe. Many of these companies are doing very similar work to each other.

I expect, in the coming months, that we will indeed see more than a few PropTech closures, but that this is a thing to be celebrated: it’s maturation.

And that leads me to a thought on PropTech accelerator/incubator programmes. When I asked Antony Slumbers whether he thought PropTech was in a bubble, he replied with some words I have to agree with:

“PropTech isn’t in a bubble. It has hardly started. PropTech incubators are a bubble, though! Innovation Theatre, as David Rowan, ex-Editor of Wired, once said.”

Antony’s right - we already have too many companies working on homogenous or unnecessary innovations, accelerators/incubators only work to bring even more to the market.

And for every great company to arise from an incubator, about fifty duds get given a lifeline they probably cannot justify.

If PropTech were in a bubble, it would be these dud companies who would be receiving vast amounts of investment, time and time again. But they’re not.

They may get some Seed and a little Series A, but that’s it, and not for much longer, not now that we’re maturing.

I’m not slagging off all incubators, but I am questioning those which are now being thrown together by large real estate firms who see it as an easy enough way of looking like they’re doing innovation.

They seem to think it’s an easy thing to pull off - it is not. They would be better off finding some existing, successful PropTech companies to talk to rather than making life more complicated for everybody by giving hope to all these young hopefuls who offer little-to-nothing or value.

Jordan Kostelac, Director of PropTech for JLL APAC, in his recent interview with Will Darbyshire, speaks passionately about this need to be more resourceful with what we already have, rather than always hoping for something new.

“But”, he says, “it’s hard for big businesses to be resourceful because there’s rarely any scarcity of resources.”

The ongoing creation of more and more incubators feels like the direct result of having far too many resources to play with.

It’s all part of the transformation

Real estate is undergoing a digital transformation and everything that is happening, we expected would happen.

This view is shared by Yasmina Darveniza, investor at Round Hill Ventures: “Real estate is the largest asset class in the world, and the rapid growth in investment into PropTech (especially from traditional real estate players) showcases that it is ready for digital transformation”.

Of course, there are going to be fits and spurts, peaks and slumps, there always is.

We are having to adjust the way we think about customers, competition, data, innovation, and our values. It is a slow, defiant march, not a cabaret show.

WeWork is WeWork and will always be WeWork – it’s an outlier. And, to be frank, it’s not even a PropTech company in my view, rather a technology-enabled real estate business.

But, even for those who believe it is a PropTech company, to use it as a litmus test for the PropTech industry is like using Amazon as a measure for online retailers - it invented an entirely new business model and then completely smashed it with branding to become once in a generation companies for real estate and ecommerce respectively.

There is no reasonable way to watch WeWork quote a value of $47 billion and then drop it to $10 billion, all while failing to turn a reliable profit, and consider it a manifest representation of PropTech.

To bring in Yasmina of Round Hill again: “Despite the negative public sentiment around WeWork, its valuation and recent IPO turmoil is not a good indicator of the potential of the PropTech sector.”

“Private and public technology company valuations have been at historic highs, however, the performance of Uber and Lyft shares after their IPOs are signals that pre-IPO companies will need to demonstrate more financially robust business models.”

“This in turn will flow into earlier stage investments throughout all tech companies regardless of sector focus, putting firms that focus on value-based investing in prime position.”

So, if you ignore WeWork, the PropTech investment numbers are far more reasonable and don’t suggest over-investment, certainly not on the .com level of the late nineties.

Another really important thing to remember is that PropTech is a global industry with many individual markets, each of which is growing and maturing at different speeds, at different times.

Therefore, each market will be travelling along the Gartner Hype Cycle, peaking and slumping at different times. Just because US PropTech is reaching this peak of expectation, PropTech is active in places like Nigeria, too, where it remains entirely in its infancy.

So, no, I don’t consider PropTech to be a bubble. Only those who lack a comprehensive understanding how technology is being inserted into real estate would believe it true.

I’m going to end on an appropriate quote from Darryll Colthurst, previously Director of Innovation at Palmer Capital: “I don't think ‘is 'PropTech' about to burst?’ is the right question.”

“In my mind, that's like asking, is real estate about to stop using technology? 'PropTech' has long been thought of as weeds in a well-maintained garden. When, in actual fact, it's food to nourish and accelerate growth.”

PropTech Today: What do Rightmove and WeWork have in common? ...

There have been two stories dominating the PropTech headlines over this...

One of my biggest concerns in all of my writing, speaking...