There have been two stories dominating the PropTech headlines over this past week. As WeWork places a gentle arm around the brokerage industry, increasingly frequent questions are being asked of Rightmove and whether its narrow business model will allow for continued success.

Why do I bring these two stories together? What do the two companies have in common? Well, absolutely nothing. And that’s the point.

Actually, there is one exception: my business partner, Eddie Holmes, and I have written extensive articles on both of their business models. I’d suggest reading them because each company thinks they’ve found the secret formula...

- The Cult of WeWork
- Rightmove - The Innovator’s Dilemma

News of WeWork moving into the brokerage sector has caused a bit of upset this week, but it doesn’t come as a surprise. As the company itself has stated in the past:

“We’re still at the very early stages of our growth, and ‘We’ remains our foundation. Now more than ever, creating opportunities for connection, promoting love and a focus on humanity is essential to empowering everything we do. Our responsibility is to humanize.”

Notice how the idea of workspace is not even mentioned, only connection, love, and humanity.

The success of WeWork is a direct result of its business model, a model built very much for the 21st Century. Agree or disagree with its methods and the persona that it displays to the world, its continued growth and fluidity is mighty impressive.

Rightmove, too, is wildly successful, one of the most successful businesses in the world. However, it is now becoming increasingly apparent that it may become a victim of its own success.

In his recent report into the company, Mike DelPrete stated that Rightmove has “an incredibly strong business, with nearly-impregnable network effects that will likely protect its core business for years”.

He adds, however, that figures prove the company is “bumping up against the glass ceiling of price rises” and that “growth is slowing”. This decline is leading to tighter cost control, threatening the ability to invest for the future.

WeWork’s allows it to be fluid and agile, sensing opportunity and pouncing. It’s allowed for WeWork to transform into WeLive, WeGym, WeLearn, WeGrow, and now WeWork Space Services, the much-discussed brokerage venture.

Whilst my Cult article expresses my concern for the WeWork brand, there can be no question that it has made brilliant use of diversification and evolution. Zoopla has done similar.

Rightmove, on the other hand, has focused entirely on great property search. It does very well for it.  The problem is it has been too narrow in its thinking.

Where WeWork has gone everywhere, Rightmove goes nowhere. And because so much success has come from going nowhere, it’s now going to be very hard to start going anywhere.

Such is the value of Rightmove that any attempts to suggest a pivot, addition, or shift in focus of its business model will be nothing short of poison to the shareholders. The profit margins are too good.

Any attempt to manipulate the business model will be seen as a direct admission that the potential returns of the current model are, indeed, finite. The shareholders panic and the share value plummets.

How can Rightmove future-proof itself?

The first choice is to do nothing, keep going and keep the stakeholders happy for as long as possible.

The inevitable result of this, however, is a protracted and painful death thanks to the fact that Rightmove has fallen foul to what Eddie Holmes calls ‘The Innovator’s Dilemma’ in his extensive report into the challenge that Rightmove faces.

A company suffers from The Innovator’s Dilemma when it has a large customer base (perhaps even a monopoly), happy with the existing service or product being provided, and when it has investors who are used to excellent financial performance and consistently good returns.

Rightmove ticks both of these boxes. Vitally, it could be argued that it has missed the all-important ‘Innovation Window’, as illustrated in the Harvard Business School graphic, below. 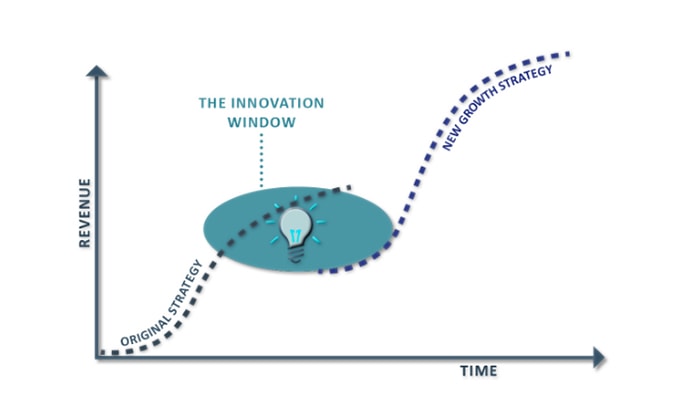 The Innovation Window is the period of opportunity that a company has to future-proof itself for another 20-or-so years, usually through using innovation to create a new growth strategy, different from that which brought the initial success.

The easiest example to give is Netflix: its initial strategy was based on increasing usership by offering easy access to films. This was soon future-proofed by creating its own production company to deliver original, exclusive content.

Rightmove failed to innovate its strategy because its stakeholders were too happy with how things were going. There was too much fear of rocking the boat. The result of falling foul of The Dilemma is that Rightmove now has zero strategy for moving forward.

So, keeping calm and carrying (wr)on(g) isn’t a viable option. Something has to change, and quickly.

Like WeWork, Rightmove must think outside of the box. Agents are already furious with the high prices being charged by the portal and it’s likely that they will soon be given a reason not to pay them anymore.

Again, WeWork is the polar opposite. It may annoy industry folk with its practices, but its customers are very happy indeed.

With rising fees, Rightmove is essentially punishing its customers for the lack of innovation within the company. There is still time for it to make a positive change and keep their phenomenal success driving forward for decades to come.

How it does it, I don’t know, but it will require decisive action. It will require an acceptance of risk and it will require a leader with long-term vision, someone who is honest enough to state to the City, who may be happy for now, that there is an absolute necessity to endure short term pain.

One thing’s for sure, Rightmove’s future won’t be secured by groping at the wallets of its core audience. Quite the opposite, in fact.

I think it’s about giving its audience more. That’s exactly what WeWork has done again with Space Services. By providing a brokerage service for those companies who are graduating from WeWork spaces and looking for their own offices, WeWork extends its relationship with the business. At the same time, it acts as a perfect soft launch for their brokerage ambitions.

I would suggest, for what it’s worth, that RIghtmove does the same: take a look at the issues and pain points that its customers, agents, currently have and then use some of its extraordinary wealth to provide some creative solutions.

If it continues to do nothing, the countdown the begins.

PropTech Today: Is PropTech about to burst? ...

There are those who say that PropTech is at risk of...

PropTech Today: Agents - here’s why you need to differentiate more ...

I remember renting flats when I was a 25-year-old negotiator at...