With Christmas less than four weeks away (yes, really) the countdown to the festive season begins tomorrow when December begins. Charity work will step up a gear as the industry does its bit for those in need.

And this week’s Agents Do Charity is the perfect platform for Yuletide Liftoff with a wide range of splendid fundraising. Join the fun by telling us what you’re up to - just email press@estateagenttoday.co.uk and we’ll tell the industry.

The Donna Louise: A unique jacket belonging to pop star Robbie Williams has helped SDL Auctions raise more than £10,000 for a children’s hospice.

The star lot appeared in a charity auction at the SDL Auctions Black & Red Ball in Derby this month and the money raised will go to The Donna Louise, SDL Auctions’ chosen charity for 2018, the young people’s hospice in Staffordshire which supports children with life-limiting conditions and their families.

More than 220 guests attended the three-course dinner with singing waiters and they enjoyed live entertainment throughout, including a raffle to win a Mulberry handbag and various other prizes, as well as the charity auction. 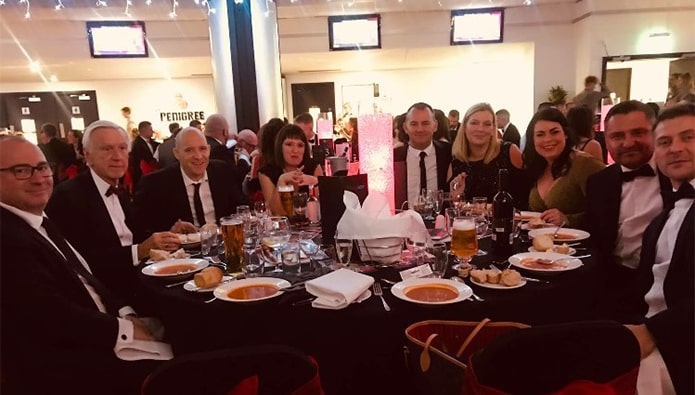 The auction lots included a pair of Longines watches, a meal for two at the Bulls Head in Repton and a Mercedes Benz experience, as well as the jacket worn by Robbie Williams during a tour with Take That.

But the most touching lot was a painting called “Together through it all” by Daniel Reeves, a 20-year-old artist with disabilities who paints with his mouth, who has been helped by The Donna Louise.

Andrew Parker, managing director at SDL Auctions, says: “The Donna Louise is such an inspirational charity and everyone at SDL Auctions has been passionate about raising as much money as we can for them this year.

“We want to send a big ‘thank you’ to all our generous guests who had a great time at our dazzling ball and it was brilliant to be running an auction where all the money raised goes to charity.”

Homeless Charities: The Fine & Country Foundation has completed its autumn grant programme, giving £45,350 to homeless charities in the UK and overseas.

In spring 2018, The Fine & Country Foundation launched its first grant programme for registered homeless charities across the world and gave more than £70,000 to 17 projects. High demand for support led to the grant programme reopening in autumn this year and a further £45,350 was given to 14 homeless projects.

Fine & Country members are supporting their favourite homeless causes by partnering with their local charities or international projects. The company hosts a number of fundraising events throughout the year: from their annual Gold Cup polo event in July, to bespoke partnerships with the King’s College Cambridge Chapel for a carol concert on Sunday 2nd December, with more than 400 attendees.

Charlotte Schofield, Foundation Co-ordinator says: “It is amazing to see our members excited and passionate about homeless causes. At the beginning of the year we had an influx of homeless charities asking for funding, so we created our bi-annual grant programme which has been a huge success.

“The charities have incredible, innovative projects. It is clear that they are making an important difference in their areas so it was tough for our Trustees to make their decisions. The grant programmes have been a great tool to introduce our members to their local homeless charities.”

St Basils works with young people aged 16 to 25 who are homeless or at risk of homelessness, helping over 5,000 young people per year across the West Midlands region with specific services in Birmingham, Coventry, Sandwell, Solihull, Walsall, Warwickshire, Worcestershire and the Wyre Forest.

The Big Birmingham Sleep-out requires individuals and teams to ‘sleep rough' for a night in the grounds of Birmingham Cathedral with just a cardboard box and a plastic bag for shelter. This is the fourth year the agency’s team from Worcester have taken part in this event and they admit they always find it a very humbling experience.

You can support them here.

In 2017 Teams4U distributed over 38,000 Christmas shoeboxes to vulnerable children and families across Romania, Bosnia and Belarus.

While this year’s final figure is yet to be announced, Teams4u has confirmed that early collection figures are up and we are delighted that we were able to play a part in boosting this year’s numbers.

Thanks to the generosity of estate agency customers, industry colleagues and friends the team has donated over 400 Christmas shoeboxes and over £500 towards the transport of boxes. 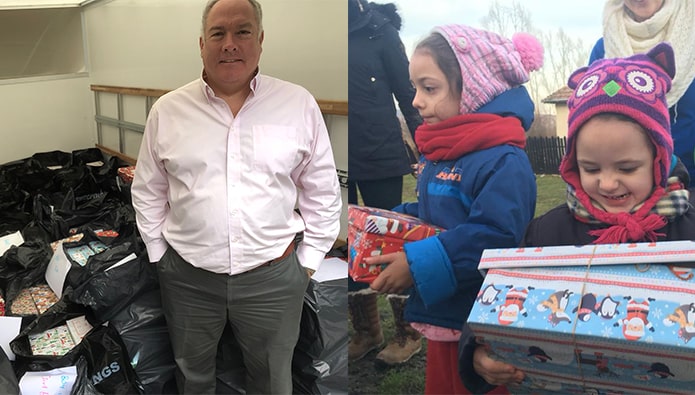 The first lorry load of Christmas shoeboxes is on its way to Romania and will be distributed through schools, nurseries, hospitals and orphanages. Every shoebox will be gratefully received, bringing joy and excitement into an often bleak existence.

Stephen Watson, managing director of Agency Express says: “This is the second year we have collaborated with Teams4u and we are really delighted with the success of this year’s campaign. The support and generosity from our customers and industry colleagues has been fantastic. We are hoping that awareness of our Christmas shoebox appeal will continue grow and that donations will continue to build year on year.”

The vital funds were raised as part of the 2018 Children with Cancer Ball, which was held this month at The Grosvenor House Hotel. The night included performances from comedian and impressionist Jon Culshaw and the American music group Sister Sledge.

Children with Cancer UK is a charity that supports research into the causes and treatments of childhood cancers while also providing better caring facilities for children and their families. The funding from the 2018 ball will be used to help further the charity’s ground-breaking research, innovative welfare projects to support families, and raise awareness of childhood cancers.

The figure of £750,000 breaks the charity’s previous fundraising record of £600,000, reached at last year’s Children with Cancer Ball.

MFS has proudly worked alongside Children with Cancer since 2014, helping improve awareness of the charity’s work and serving as an active committee member. The bridging loan provider regularly supports charitable causes – in June of this year, MFS proudly raised over £26,000 for the British Heart Foundation.

Chestertons: The London Magazine Club Awards 2018 took place this month at the Hotel Café Royal in London, in celebration of the outstanding contribution of CLEA agents to the capital, to charity and to the industry.

There were six award categories in total and Chestertons was the winner of the Special Charity Award, a category that looked at significant contributions to charity and initiatives that have made a real difference to people’s lives in London. 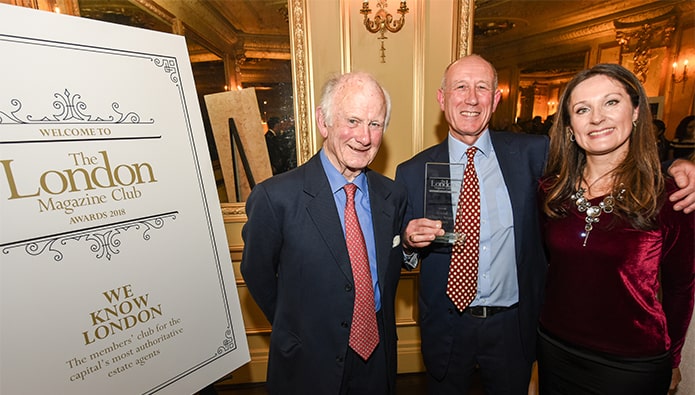 The judges praised Chestertons for the variety of its fundraising and charitable work with St Mungo’s, Suited and Booted and Dogs Trust, as well as its generosity of staff through its payroll giving scheme.

Tim Bates, marketing manager and treasurer of Chestertons’ Charity Champions, says: “We aim to differentiate ourselves from others, using our size and expanse across London to help improve and build better communities in which we work. As a company, we are focused on having a real impact and our involvement in communities goes well beyond simply helping people to find a place to live. We are therefore delighted to receive such award which recognises our commitment to making a difference.”

Around 4,750 people were estimated to be sleeping rough on any given night in England in 2017, with 615 of those in the East of England

Mortgage Sleep Out is hoping to raise £100,000 which would provide more than 4,000 days of support for homeless young people across the UK

Overall more than 1,000 mortgage industry professionals from over 70 businesses have pledged to spend the night on the streets to raise funds and awareness of homelessness in the UK.

Good luck from all of us at Estate Agent Today!

Agents Giving Christmas Ball: Hamptons International is set to take part in the Agents Got Talent contest, which will be held at the annual Agents Giving Ball next Friday.

Olivia Snow, customer relations manager at Hamptons International, will regale the audience with a show tune at what is known as the ‘industry bash of the year.’

Alongside the talent contest, there will also be an awards ceremony to award the best fundraising agents of the year.

Lesley Cairns, managing director of Hamptons International says: “We are delighted that Olivia is representing Hamptons International in the Agents Got Talent contest. Olivia is an excellent ambassador for the business and we look forward to hearing her sing. The Agents Giving Ball is a fantastic event raising money for charity and we couldn’t be happier to be taking part.”

The evening was attended by 85 local estate agents, solicitor firms and friends of JLL and as well as the quiz, include a raffle which raised just under £500.

Yasmin Forrester, director at JLL, says: “We would like to thank everyone who came and helped us raise money for this incredibly important charity. Our teams at JLL really get behind all our fundraising efforts including running the London Marathon, our annual triathlon, and many of the staff have also volunteered with Crisis, working directly with people transitioning out of homelessness.”

JLL has recently announced it is extending its partnership with Crisis for a further two years to focus on fundraising as well as more strategic work to address a long-term plan to get more people into housing.

Hello, and the wind-down to the Big Day continues with more...