It’s London Marathon weekend and it’s set to be hot, hot, hot for those agents and other brave industry folk running in this great event.

It’s not the only way to raise money for good causes but this week Agents Do Charity is majoring on your heroics in this weekend’s event and others around the country.

But whatever your good work - from a pub crawl to a long-distance run - please let us know on press@estateagenttoday.co.uk and we’ll do the rest.

Now, where are those trainers?

Crisis: Five members of the JLL team will be running the London marathon to raise money and awareness of the vital work that Crisis does, including: Tamara Kennedy, Alexandra Marsh, Michael Gillon, Jonathan Tavey and Jamie Prys-Owen. 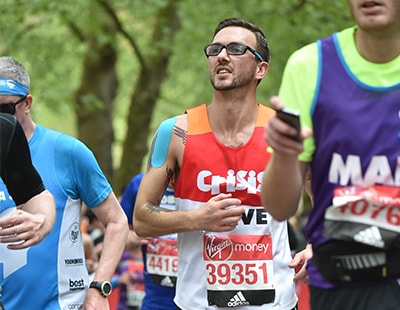 Chris Ireland, UK CEO at JLL says: "Since December 2016, we have been raising money and awareness for Crisis, who do some incredible work across the country with homeless individuals."

"The marathon is a physically grueling feat and the team have raised an incredible sum for the charity. We wish the team good luck and will be cheering all runners on the day."

The Spring Centre/Maggie’s Cheltenham: A team of four runners from Gloucestershire estate agency, The Property Centre, has raised over £10,500 for charity so far by taking on their biggest challenge to date – running the London Marathon.

As an independent local estate agent, supporting local charities - especially the smaller, underfunded ones - is important to The Property Centre, and whilst the charities they’re running for may not be high-profile, they both certainly do an amazing job. 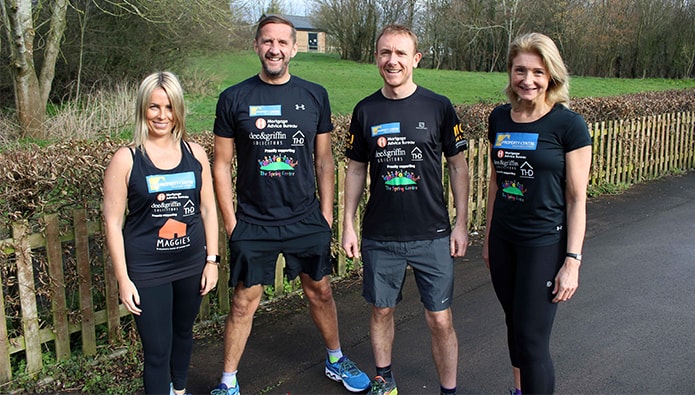 The Spring Centre, based in Gloucester, gives invaluable support to hundreds of disabled children and their families from all across the county, while Maggie’s Cheltenham is a place where anyone affected by cancer is welcome and given practical, emotional and social support.

The four runners, including founding partner Steve Jones, have been in training since October, but all admit the winter miles have been tough going. “None of us have ever run a marathon before,” says Steve. “We’ve run 10k and half marathons,  but this is something much bigger altogether. Training has been really hard because of the distances we’ve had to run, not to mention the cold winter weather. The snow in March made things interesting, but we all still put in the miles - knowing that we’re doing this to help two such worthy charities has been enough to keep us going.”

Clint strode ahead but soon noticed his calf muscle giving way and slowed his pace. At Mile 11, he was overtaken by runners dressed as a badger and a post-box, which helped him to break through his mental wall and stride to the finish line in a respectable five hours 40 minutes. 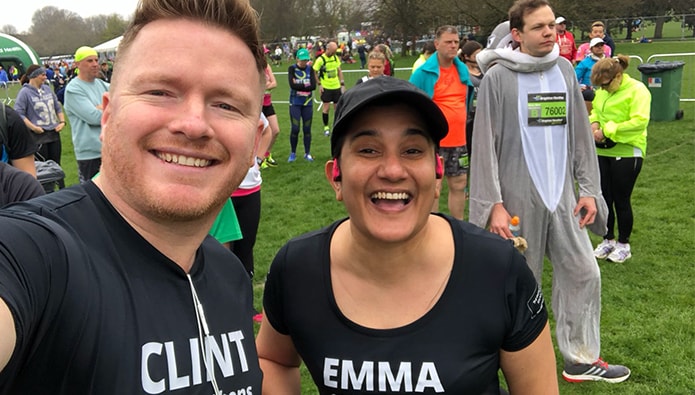 Emma, mother of two, faced her own mental battles in the race. At Mile 16 she was cold, covered in rain and about to give up. She called her husband who was standing in the cheering crowds and he cycled down the race course to give Emma his coat and pedal alongside her for a further mile while she regained her mental strength. After this minor blip, Emma raced to the finish line in six hours 34 minutes.

The pair are running one marathon per month for 12 months to raise money and awareness for homelessness through The Fine & Country Foundation. They aim to raise £1,000 per marathon and are currently on track to reach their goal. The next marathon is in Exeter on Sunday 20th May and Emma and Clint would love your support in the race or cheering from the side-lines.

Centrepoint: The flamboyant Kristjan Byfield is pledging to wear his Viking outfit to the ESTAS 2018 today...what a picture that will make if his Base Property agency wins and he’s photographed with Phil Spencer!

Centrepoint, a charity which supports over 9,000 16 to 25 year olds into housing and employment every year.

It’s a great cause and a fun thing to do as well - do please support Kristjan by donating here. https://www.justgiving.com/fundraising/kristjan-as-thor

Changing Lives is a national, registered charity which provides specialist support services for 21,000 vulnerable people and their families, every year. Voted North East Charity of the Year in 2017 for their pioneering and innovative work, they support vulnerable and socially excluded people to make lasting changes in their lives.They work with people facing a range of challenges such as homelessness, addiction to drugs or alcohol, domestic violence, long-term unemployment,  and more.

Ben Ridgway, Managing Director of ISG, comments: "Historically, ISG has raised funds for a broad range of charities both regionally and nationally, and we are proud of the work we have done. This year we wanted to agree a partnership where we could consistently support one charity and make a sustained difference.”

Variety’s PROPS Awards: This fantastic children’s charity has just revealed its shortlist of nominees for the 27th PROPS Awards taking place on May 8 at the London Hilton on Park Lane.

As one of the real estate industry’s key fundraising events, the event is designed to raise proceeds to purchase powered wheelchairs for disabled and disadvantaged children and young people throughout the UK. The Awards were first held in 1992 and have since generated over £10m for the charity and 2,000 powered wheelchairs.

Variety was first established in Pittsburgh in 1928 and gradually became involved in helping disabled and disadvantaged children around the world. Since then, more than £270m has been raised by Variety in the UK providing over 5,500 Sunshine Coaches, almost the same number of wheelchairs, thousands of grants to individual children and life-saving support for children’s hospitals, hospices and youth clubs.

Nominations include those for the residential agent of the year, with the shortlist comprising Carter Jonas, Purplebricks, Knight Frank, Dexters and Savills.

Derbyshire, Leicestershire and Rutland Air Ambulance: Staff at Barratt and David Wilson Homes North Midlands have raised £25,000 for their charity of the year.

The housebuilder announced the cause as its official charity of the year in January 2017, after the ambulance assisted sales extras co-ordinator Claire Hancock's brother when he was in a motorbike crash.

Along with fundraising efforts at a charity dinner, Claire bravely shaved her hair to raise money for the cause.

Staff members also donated money each Friday for their dress down day and marketing assistant Zoe Nightingale took part in two half marathons to raise money.

Claire says: “I put forward Derbyshire, Leicestershire and Rutland Air Ambulance as our Charity of the Year because without them getting my brother Andrew to the hospital after his crash within such a short time - he wouldn't be here today.”

Sport Relief: Staff at David Wilson Homes East Midlands ditched their business wear in favour of trainers and sports gear to embark upon a testing challenge in aid of Sport Relief.

Volunteers across the company pitched in to help clock up the 1,051 miles for their Bardon to Barcelona challenge, with staff at head office taking it in turns to do their stint on exercise bikes in the division's very own 'Cycle Hub' in reception.

The distance travelled marked the journey it would take from its head office in Bardon to Barcelona and the team managed to reach the target in just five days.

Thanks to the team effort, more than £1,500 has been raised for Sport Relief.

The J’s Hospice: Recently over 750 people of all ages dusted off their bicycles to take part in this popular Chelmsford annual event in aid of The J’s Hospice.

Andrew Carrington, managing director of strategic land at developer Countryside said: “The work that this charity does is life changing for many of our neighbours in Chelmsford.  The Pedal for the J’s is a fabulous event – people of all ages coming together to help others is very inspirational. It is a charity that we love supporting as they make such a difference to people in need of support in the local community.” 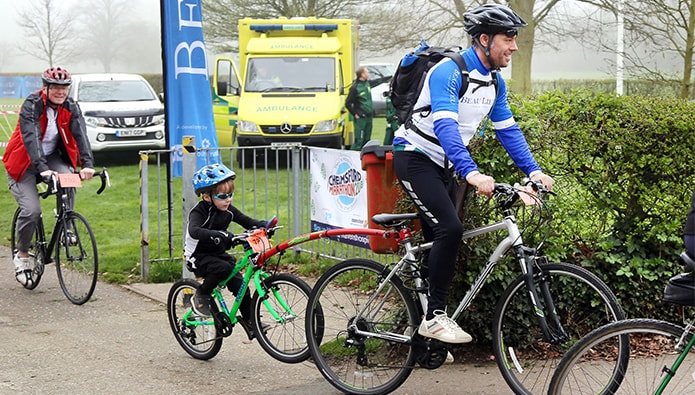 The J’s Hospice provides hospice care in the home for young adults throughout Essex. Due to improvements in medical care and technology, the population of young adults with life limiting conditions is growing.

At 16 years old, they have outgrown children’s services but are still in need of  care and support. The J’s Hospice team provides a wide range of enhanced care including tailored specialist nursing, respite and advice as well as end of life care and bereavement support.

Fifteen children, aged between eight and 10, learnt about interior design and what goes into decorating a home as part of their DIY badge. The cubs explored the development and discussed how the show home could inspire their future houses once they have grown up.

The interior design visit is just one of the ways in which David Wilson Homes North West and the Darnhall Cubs are working together, with another trip to finish their DIY badge booked in for later this year.