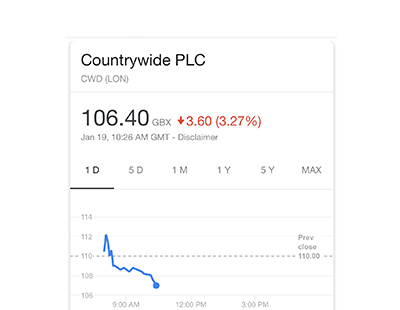 Shares in troubled agency group Countrywide have fallen to their lowest-ever level of 106.40p in trading this morning.

Yesterday shares fell a startling 18.64 per cent and today’s is a further drop in excess of three per cent at the time of writing. Previous lows had been 108.0 and 107.0 last autumn.

This follows Countrywide’s unexpected profits warning earlier this week, when it indicated that income, revenue and profits were all likely to be weaker than expected.

The firm says total income in the sales and lettings business for the full 2017 year is expected to be circa £360m, down 14 per cent on 2016, “reflecting a disappointing fourth quarter performance.”

Today’s ignominious share price is the latest in a series of stock market drops suffered by the troubled group, which has undergone substantial management changes, agency branch closures and a series of restructuring processes in recent years.

An experiment to run an online option for landlords and sellers is officially “on hold” but Countrywide has not responded to requests for information on what the next move is for the initiative.

This week’s trading statement, unusually, did not include a direct quote to shareholders from chief executive Alison Platt, who took on additional responsibilities in the light of the most recent restructuring of senior management towards the end of 2017.

Jefferies - the City consultancy which has in the past worked...

The chief executive and founder of a developer and property investment...