Fund-raising is vitally important to so many organisations as one of our agency contributors this week shows - but as other contributors demonstrate, too, there are more ways than one to help charity.

So whether your organisation is speaking to a group to raise awareness, providing help in kind, or just doing a hard-core fund-raising drive, this is the opportunity to let the rest of the industry know.

Just drop us a line at press@estateagenttoday.co.uk and we’ll gladly publicise your hard work.

Joining the likes of fellow partners British Airways and Cadbury, a representative from Hamptons International presented to children on the qualities required to be a good estate agent and gave them insight into working within the property industry.

Daniel O’Brien - a regional sales director who has previously been recognised as the Best Valuer in the UK at industry awards - presented to an audience of school children between the ages of seven and 11 on what it is like to be an estate agent at Hamptons International.

Daniel explained how he rose through the ranks to eventually run 12 London offices and offered pieces of wisdom such as: “If you really stick at things you can be successful, that’s what we pride ourselves on at Hamptons”.

Daniel built a natural rapport with his young audience and helped them to develop their understanding of the world of estate agency with a range of interactive activities which were designed to encourage the children to think about the most important traits in a good estate agent.

At the end of the session, Daniel reminded the children to take advantage of their newfound knowledge at the Hamptons International Kidzania branch, which has been welcoming mini estate agents in the making since January 2016.

Macari Foundation: Tom Williams, managing director of Findahome Online, and James Pattinson, senior sales negotiator at the hybrid agency, were among those who bedded down at the bet365 stadium in Stoke to help highlight the problem of homelessness and to raise money for the Macari Foundation.

The Stoke Sentinel newspaper says the foundation opened a centre last year for people sleeping rough to get a bed and warm food as well as help and support to get their life back onto a more stable footing.

Tom says: "James and I completed the sleep out - we’ve raised £318 for the Macari Foundation. It was cold, but worthwhile. We experienced one night of what some people have to endure every day. We slept on flat cardboard boxes, in just a sleeping bag."

Andrew Rowney, Assistant Head Teacher and PE Leader at the school, says: ‘The shirts include the motto ‘Enthusiasm breeds Excellence’ which is a philosophy we all strongly believe in.

The agency has also used its Community Support Programme to help other worthwhile groups in the area including West Leeds Juniors under 7’s and Farnley Football Club. 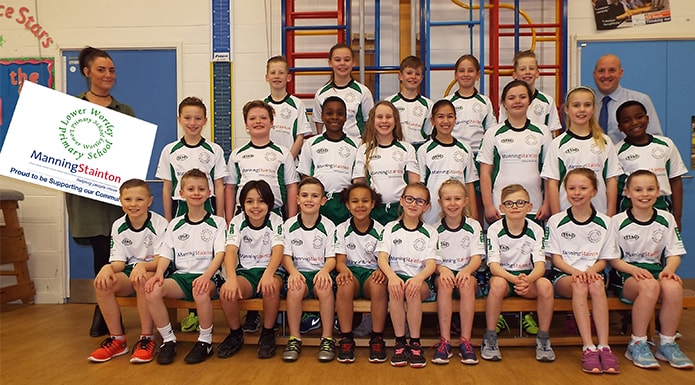