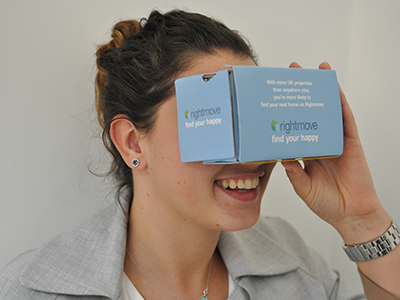 Rightmove has begun testing a virtual reality viewing platform which will allow prospective buyers to view properties without leaving their own home.

The trial tours, organised through north London agency Martyn Gerrard, can be viewed on a smartphone through a Google Cardboard headset.

The tours were put together using a camera rig with six connected GoPro cameras and the resulting footage has been stitched together to create a 'fully immersive' 360-degree video.

The virtual reality tours, for a £2.5 million mansion and a new development in Finchley, are available on Rightmove's YouTube channel.

They can be viewed using a Google Cardboard headset or through the 360-degree video app, Littlstar.

Martyrn Gerrard will also be promoting the tours to prospective buyers at its Finchley and Whetstone offices.

“Rightmove is always looking for innovative new ways to make the process of searching for and buying a house even easier, and this is an interesting avenue we wanted to explore," says Rightmove's head of innovation, Hannes Buhrmann.

"With this approach, potential buyers could get more of a feel for properties and choose ones to visit that really suit their requirements. It could make the whole process more time efficient for buyers, agents and vendors.”

The two branch agency says it is the first in the UK – if not the world – to produce tours on a large scale for almost all of its properties for sale or to let.

Walton & Allen has partnered with NewtonMedia.TV to produce tours which can be viewed through virtual reality headsets.

NewtonMedia says its tours allow prospective buyers to stand outside of a property and see how busy the local roads are for example, and include local features like parks and markets.

"We want to reduce the number of unnecessary viewings sellers have to go through before achieving a sale,” says Phil Williams, director of residential sales at Walton & Allen.

“It's all very well estate agents bragging a house has had 27 viewings but that's 27 times the seller has had to tidy up and set their time aside for people who, had they seen the artex on the ceiling or tiny third bedroom beforehand wouldn't have wasted their time.”

The agency says it is making no attempt to replace actual viewings but is trying to knock down scheduling and access obstacles faced by agents and vendors on a regular basis.

One of Rightmove’s trial tours is embedded below and you can view one of Walton & Allen’s tours here.

A Nottingham estate agency is set to open its fourth branch...

Foxtons, Chancellors and Douglas & Gordon have been named among the...