Happy New Year to all those (bet you’re a little bored of hearing that now, aren’t you?) - but we know many agents make it a happy year every year for local charities.

Once again we will be delighted to chronicle and salute your fund-raising efforts in 2016. Just send details to press@estateagenttoday.co.uk and we’ll try to feature your efforts, and links to fundraising pages on social media and online.

These agents below contacted us in exactly that way, and we are very pleased to mark their pre-Christmas good works.

Make A Wish, Save The Children, MacMillan Cancer Support: A number of south west England agents joined forces to take part in TextSanta’s Christmas Jumper Day just before Christmas. Staff from Mayfair Town & Country, Tamlyns and Elder & Froy put on their best festive jumpers and aprons to host cake sales raising a total of £419.22 for Make a Wish, Save the Children and Macmillan Cancer Support.

Morley Victoria Primary School: It was a Christmas to remember for one talented local schoolgirl after winning a Draw Your Dream Home competition organised by agency Manning Stainton.

Eight year old Emily Fryer, a pupil at Morley Victoria Primary School, received an iPad and a £500 donation to school funds after her fabulous artistic skills caught the eyes of the judges. Her drawing will also appear on a special card that Manning Stainton sends to clients who buy their dream home through them.

Harrison Murray’s Chosen Charities: Some 23 branches of Harrison Murray and The Nottingham Estate Agency have collected almost 150 boxes for local charities as part of their seasonal shoe box appeal. In total in 2015 the businesses, part of Nottingham Building Society, have donated 500 hours, £50,000 in grants and raised over £30,000 for local causes as part of its Doing Good Together initiative.

Ty Hafan Children’s Hospice: The charity and families of children at the hospice send their thanks to the Conveyancing Foundation for its £50,000 donation, raised through 2015. ‘The Lost Conveyancing Ladies’ - Gareth Richards, Rob Hosier, Geraint Aubrey and Lloyd Davies - attended a pantomime at the hospice to entertain the children just before Christmas. 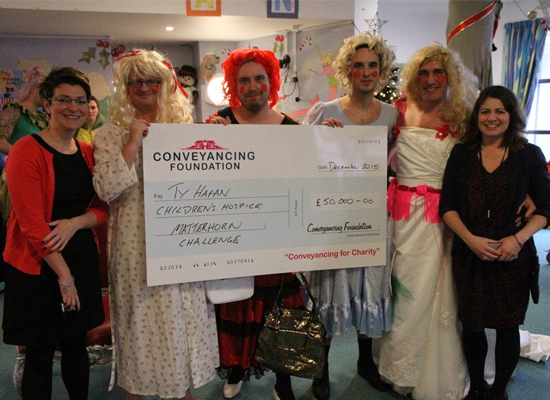