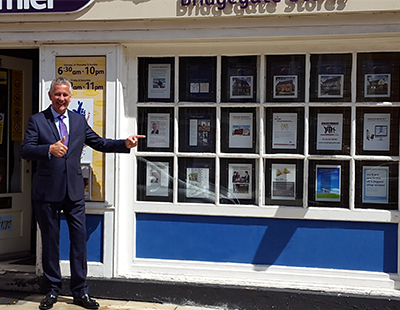 An estate agent who co-presented BBC programme Living in the Sun has opened a hybrid estate agency with what he calls a 'big difference'.

Scott Lucy, an agent for the past fifteen years, has this month launched an Amazing Results! franchise in West Cheshire.

“We’re a hybrid of an online and traditional High Street agent and we offer the best of both those worlds,” he explains.

Lucy says he released his pension pot to purchase the franchise and that Amazing Results! do things very differently from anything he has ever experienced before.

The 'big difference' Lucy refers to is that his agency does not have an official high street presence but 'takes over' underused window space in local shops to advertise its properties.

The ex-television presenter says this represents a win-win situation.

“The local shopkeepers get some needed extra revenue, we get high street exposure without the usual expensive costs and this is passed onto our clients through lower commission fees,” he says.

Lucy worked on Living in the Sun as a Spanish property expert for four years alongside Nadia Sawalha and the late Kristian Digby.

“I moved to Cheshire to be close to my son and daughter following many successful years owning estate agency offices in Spain. The BBC work came by out of the blue and ended up being a lot of fun until the Spanish property crash in 2007,” says Lucy.

The agent says that the initial response to his new business has been encouraging and that he is already on the lookout for people to join his team.

Amazing Results! describes itself as one of the UK's leading estate agency franchises.

The firm was founded in Edinburgh in 2013 and has offices in locations around the UK, including the Orkney Islands, County Durham and St. Andrews.

Property Jobs Today - the latest on moves within the industry... ...

130 jobs at risk as agency and auction firm appoints administrators ...

It’s been reported that a Cheshire estate agent and auction house...

Estate agency rapped over claim that it's "the leading agent in..." ...

A Cheshire estate agency has had to amend its website following...