In a return to a favourite series of mine, as it gives an excellent insight into the very many facets of the agency world, I asked the founder of the ESTAS – Mr Simon Brown – to give us a sneak peek into what his average day looks like and what goes on behind the scenes to make the ESTAS such a success each year.

Often described as the estate agency version of the Oscars, the ESTAS sees thousands of agents, conveyancers, mortgage advisers and suppliers come together – typically in a prestigious London hotel – to celebrate the great and good of the industry as various awards are handed out.

But it’s not just about the gongs – the ESTAS is an all-day (and often all-night!) affair, with networking and exhibiting opportunities before the awards ceremony starts in earnest, followed by official and then unofficial after-parties.

Last year, due to the pandemic, it went online for the first time in its 18-year history, but it is set to return with a bang in October this year, when The ESTAS Forum & Awards 2021 are due to take place live in London.

In an industry first, this year’s event will see the UK’s top agents, brokers, conveyancers and suppliers gather under one roof (previously a separate event was held for conveyancers and mortgage brokers).

The morning ‘Forum’ will see 300 owners and directors discuss the relationship between agents and conveyancers, with the theme of 'WORKINGTOGETHER BETTER'. 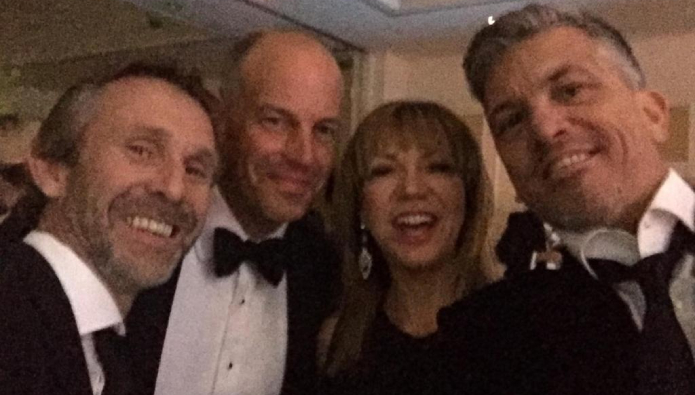 (Me with Simon, Phil Spencer and Simon's wife Sarah at a previous ESTAS)

Then the customer service awards will follow in the afternoon and evening, hosted (as always) by TV property personality and EAT columnist Phil Spencer. The event was pushed back to October from its usual May date to give it a better chance of going ahead.

With the vaccine rollout going well, and test events seeming to go off without a hitch so far, there is now a good chance the ESTAS will be the first big live property event to take place for well over a year. The joy of being back surrounded by people will give this year’s event that extra something special.

For some context, the ESTAS Group was founded by Simon – whose background is in marketing - in 2003. The award scheme was initially started to highlight estate agents who went out of their way to provide outstanding service to their customers.

From the very start, the judging process was based purely on ratings received by clients completing a paper questionnaire (now an online survey) – something that remains the same to this day. With the awards being powered by a customer review platform, it means winners are chosen based on real reviews from real customers experiencing real service. The awards, therefore, can act as a fantastic testimonial for firms as they are based on lived experience.

The success of the ESTAS soon saw the introduction of a letting agent category and, nowadays, the awards include categories for agents, mortgage brokers, conveyancers and homebuilders.

Ahead of the event in October, the ESTAS are revealing this year’s shortlists in a series of virtual programmes during May. The first shortlist was announced yesterday and will continue on the remaining Fridays of this month at 4pm.

Now, without further ado, let’s hear from the man who is the brains behind the industry’s biggest awards show. Take it away, Simon!

The sun rises at 6am like clockwork every day of the year for me – well, actually it’s one of those sunrise alarm clocks which I can highly recommend.

My first job of the day is a cup of tea (strong Yorkshire tea with a dash of milk) and catch up with the news of the day and sport from the night before. At the moment, my favourite articles are the ones telling us how much further ahead we are in the vaccination rates against the other European countries. They say it’s not a race, but let’s be very honest - it is - and currently the UK is smashing it! I also check out EAT and LAT, of course, for all the latest trade news!

Next job is to let the dogs out. We have two miniature dachshunds, Sidney and Bertie. If it’s cold or wet, it’s a nightmare trying to push them out the door! I make a tea for my wife Sarah at 7am and I do my morning exercise routine.

Before the first lockdown, I used to be an avid gym-goer, but now I much prefer to do a home workout. I’m very self-motivated so I do 45 minutes of stretches, core exercises and weights and then I go for a bike ride, which I love! We live in the Sussex countryside so it’s great to just get outside for a half hour ride. We’re lucky that we are surrounded by quiet country lanes so I can choose a different route almost every day and only see a few cars, if any at all.

I’m normally back at the house by 8am, shower and then it’s breakfast time. It’s granola, Greek yoghurt and blueberries at the moment, and then I switch to porridge in the winter. I sit at my desk at 9am and deal with any emails that have come in the previous evening. I’m very disciplined in that I don’t look at emails after I leave my desk the day before (normally about 5.30pm) and I try not to look at them over weekends, either.

Even before the lockdowns started, we’ve always had a substantial home office with five workstations, so we’ve learned over the years how to separate work and home life. I even change out of ‘work’ clothes after I leave my desk to help me adjust mentally to ‘home’ time.

My main role in the business has always been marketing/PR related. Our ESTAS customer review platform (which powers The ESTAS Awards) has seen huge growth in the last 18 months and is now our core business, so development meetings with our web team take up an increasing amount of my time.

The good news is we are now starting to plan our ESTAS Awards 2021, which will be taking place in October this year. Organising this is a two-year process as we have to book and confirm the venue that far in advance to guarantee a date at the Grosvenor House Hotel in London, which is one of the most prestigious locations for an awards event in the world.

We have a series of planning meetings on site, which become more frequent as we get closer to the event. These meetings involve all the various suppliers who are responsible for putting the awards together; these include set designers and builders, lighting and sound, graphics and video, autocue, as well as the events team in the hotel and catering and security.

We also have separate meetings with our trophy designers and print design agency to ensure every element is branded seamlessly across all our various media for the event.

As we get closer, a lot of my time is spent producing the show in terms of scripts, video and music. I’ll have several meetings with Phil Spencer, our ESTAS host, which is always fun as we’ve been putting the event together with him now for 18 years.

Regardless of how my day pans out, I always like to finish it with a small glass of local Sussex wine - unless it’s a Friday, in which case it’s a bottle!

Thanks very much, Simon - a fascinating insight into what is required to make a major event pass off seamlessly, without anyone realising just what a finely drilled operation it is. On behalf of everyone who has attended the ESTAS in the last nearly two decades, I think we can all agree in saying a wholehearted thank you to you and your team for the work you put in.

Here's hoping we can all come together to share a beer, wine, chat and dance in London in October. I'll cheers to that!

You can see a short video version of Simon's typical day below - including sleepy dogs, shots of lovely South Downs countryside, awkward filming while riding a bike and an inviting drop of Sussex red wine.

Property Natter: Day in the life of…Winkworth’s head of brand ...

In the first of an ongoing series exploring the people who...