In the first Q&A Natter for a while, I catch up with Angelica Donati - CEO of Donati Immobiliare Group, PropTech founder and investor, and Forbes columnist – for her thoughts on Brexit, equality in property and the future growth of PropTech.

Why did you decide to halt any investment in the UK until after Brexit is resolved?

I decided to halt investment in the UK due to the uncertainty of how Brexit would be handled and how it would play out, and recent events have proven me right! Three years on, the waters are murkier than ever and we don’t even know who will be leading negotiations for the UK as of next month… let alone what their outcome will be. 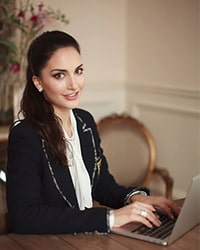 Economic cycles can be modelled to a degree, but politics are driven by people and there is no way to account for that, especially in this strange new world we live in. Further, as a euro denominated investor, I was not comfortable continuing to be long sterling (or go longer than my current position) when all evidence pointed to a firmly negative outlook. On the currency, at least, I think we’ve put the worst behind us, as long as the UK steers clear of a hard Brexit.

What do you think Brexit – if it ever actually takes place – will mean for the UK housing market? Will it make it less, or more, attractive to outside investment?

Brexit can only bring bad news for the UK housing market. Today, the “Theresa May” version is pretty much priced in, and this has already caused an increase in domestic costs due to the currency devaluation. Let’s not forget that the UK is a net importer of pretty much everything, including labour and materials such as steel which are essential to construction.

In the instance that a hard Brexit were to take place, cost inflation would sky-rocket and this, coupled with the mass exodus of unskilled and semi-skilled labour, which the UK cannot replace with its own workforce, would cripple the construction industry and make build costs sky-rocket. New homes would therefore not be built, as at the same time the housing market would plummet as the country fell into recession.

The UK may be attractive to outside investment thanks to rock bottom prices and cheap currency, but this would materialise in the form of foreign buyers sweeping in to scoop up trophy assets in London.

What kind of Brexit would encourage you to invest again? Would a final decision either way make investment less risky?

To be frank, any solution to the current stalemate would be welcome. A hard Brexit would be disastrous, but it would definitely bring good buying opportunities for longer-term investments.

However, this would be at the detriment of the UK economy, as the destruction of value with a hard Brexit would be enormous, something that the politicians currently vying for the Tory top job would do well to remember.

Theresa May's deal pleased nobody, but as I said before its effects are fully priced in so that plan being brought to fulfilment would allow investors, as she would say “to get on with it”. My preferred outcome is, of course, no Brexit at all!

I think the past three years have amply demonstrated you cannot have your cake and eat it, and let’s not forget that the UK had a very favourable deal with the EU in the first place.

You write regularly about PropTech for Forbes magazine and also hosted the Women in Property PropTech event in December last year – what are your favourite PropTech products?

That is a difficult question to answer! PropTech spans the entire value chain for the built environment, from design and construction through to asset management, and as such there is a vast menu of products and technologies for each function and stage.

I think the most significant trend at the moment is that of real estate incumbents (the big investors, owners and agents) finally embracing the concept of space-as-a-service, and realising that tech is key to delivering this service. This ranges from sensors and advanced machine learning driven analytics to optimise usage and customer satisfaction in a space, to tenant experience platforms and novel ways of linking buildings and their occupiers to the surrounding community.

Now it’s well established, what is the next stage of PropTech’s evolution?

PropTech is most definitely on the rise. In 2011, only $186 million was invested in it worldwide. Fast forward to last year and, according to some metrics, that figure has ballooned to 15 billion dollars!

Now that it's firmly on the main stage in terms of investments, the next steps hinge around user adoption. The next ten years are hard to predict but, from a more medium-term perspective, these are the key trends to watch in my opinion:

- an ever-bigger push in PropTech implementation by real estate incumbents

- industry consolidation as startups merge or are acquired, a sure sign of maturity in the space

How can agents use PropTech effectively to advance their businesses?

There are plenty of ways agents can use tech to advance their business. The goal should be to automate ways the non-value-adding tasks such as admin, or indeed much of the everyday tasks that go into property management, and tech can help with that.

The products on offer are endless, ranging from agency software through lead management and matching platforms to AI-powered maintenance and management assistants. This way, the agent can do what he or she is uniquely placed to do, which is to close deals.

As a high-profile woman involved in the property industry, do you feel the sector is a level playing field?

That’s a difficult question to answer. Numbers don’t lie, and it is a fact that there are only about 12% women in real estate, and the PropTech figure is very similar. Historically, real estate has been a man’s world and it has been very hard for women to make inroads in the sector. That being said, there are many signs pointing to the fact that things are changing.

For example, I sit on the board of YEP Global, a networking group for young professionals in real estate, and our membership is 50% female. Now, I can’t tell you if that’s because there are more young women in the industry or if it’s because women feel the need to network more to become established, but it’s definitely a positive sign.

As someone who spent her entire career in male-dominated environments (first in financial services and now in real estate and tech) I have to say that I have never felt that the odds were against me.

I think there are opportunities for women in the industry, and the advent of tech is helping as it opens the space to people who don’t come from traditional property backgrounds.

Brilliant answers, Angelica. Thanks very much for an excellent insight into various aspects of our industry that aren't discussed frequently enough.