In the latest part of the Natter’s ‘day in the life of’ series, I catch up with Chris Osmond, sales director at London agency JOHNS&CO – a company which has been a great help with a number of our London regeneration pieces on Property Investor Today of late.

Chris (pictured below, back right) began his career in property back in 2002, when fresh out of school he joined Royal Docks Property Services as a lettings negotiator. After just over two years in this role, he moved into the role of sales negotiator at the same company and then after a further year advanced into the role of sales manager of the company’s Canary Wharf branch, a position he held for nine years.

He now oversees sales for all of JOHNS&CO’s London branches.

But what does an average day look like for a sales director working for one of London’s busiest estate agencies?

Take it away, Chris…

Without fail, my day starts with two pre-schoolers jumping on my head around 6.30am if we’re lucky, but more often than not it’s closer to 6.15. Long gone are the days when I needed an actual alarm clock to wake me up!

We live in Kelvedon in North Essex so an early start suits me fine as I try to get the 7.30am train from Kelvedon to Stratford and then the Jubilee line into our HQ at Canary Wharf.

In my earlier years, I always tried to work during my commute, but it’s taken a few extra years of professional growth and grey hair to accept that at that time of the morning, I’m really not bringing my A game! So, after checking and responding to any urgent emails whilst on the platform, I usually spend my train journey with my head in a good book or listening to a podcast (I’m currently enjoying The Dollop – two comedians’ take on history) to get myself warmed up for the day ahead.

My stroll from the station to the office takes me past an amazing Brazilian coffee van which provides me with my first caffeine hit of the day. I return later in the day for my afternoon fix and maybe a third time if I’m having a particularly hectic day.

I start my week with face-to-face meetings with my managers. We will go through performance stats, objectives for the week and we will discuss any unforeseen challenges and discuss how best to approach them.  I’m a fairly laissez-faire manager so once I’m in the know, I don’t tend to meddle too much thereafter.

We will also discuss the latest monthly incentive that I’ve set the teams to keep them motivated. Last month, I worked out the par performance of everyone in the team - and asked them to outperform it by 25%. Nine out of the 15 members of staff achieved it and we had a brilliant private dinner at Goodmans in the City. I run a different incentive every month and like to mix it up to keep all members of staff as motivated as possible. 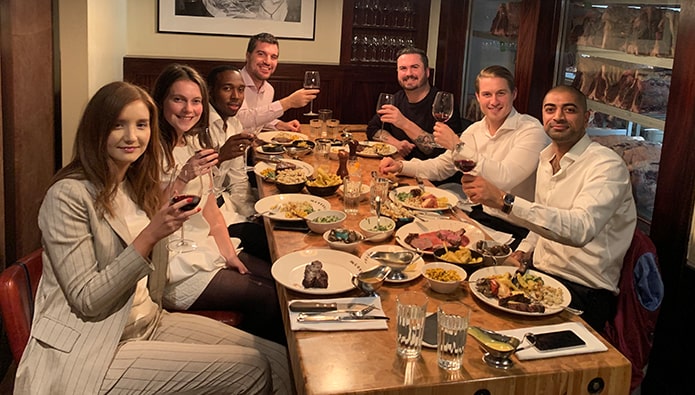 One meeting is usually followed by another over the course of the morning - it might be a weekly update from Capricorn, our finance partner, to keep us abreast of active cases, or a senior leadership team meeting for business updates and strategy planning. I also meet regularly with our new homes director to ensure that I’m aware of what launches and events are taking place and the implications for my team.

I hate myself for saying it but lunchtime is usually a classic estate agent’s lunch - a sandwich, a packet of crisps and a drink from Pret……more often than not at my desk! On the plus side, they’ve brought out their Christmas sandwich which I’ve already enjoyed on far too many occasions given that we’re still in November!

I like to set aside some time in the afternoon to meet with external businesses and suppliers. I’m working on a top secret and incredibly exciting project at the moment with a PropTech firm which will announce a new product for the estate agency industry in the New Year.

We have an exclusivity arrangement with them and will soon begin to soft-launch their product. If it all goes to plan, I can say with great confidence that it will revolutionise the sales progression process – or at least how JOHNS&CO will be operating to improve service to our clients.

I can’t reveal much more than that at the moment but suffice to say, this has been taking quite a bit of time as we get ready for the beta testing.

As more growth is on the cards for JOHNS&CO in 2020, not only is the Senior Leadership Team meeting regularly to discuss recruitment requirements but we are also getting ready to launch a flagship branch in Royal Wharf, E16.

It will be our biggest office (some 40 staff) and will be home to support staff as well as the Royal Wharf sales and lettings teams. I’ve been involved in brainstorming the office layout and signage and am particularly pleased to say that my bright idea to have a giant and brightly-lit version of our Ampersand logo hung on the exterior point of the office (like the figurehead on the front of a ship) has been approved! You heard it here first…

As we have three offices in Asia (HK, Singapore and Shanghai) which are staffed with client services experts, I will also spend some time each week catching up with the teams there as well as our Head of Client Services, Ashley Conaghan, who is based in London.

It’s important for me to know which launches and events have been successful - or not as the case may be - a development’s success in Asia will often be a good gauge, to a certain degree, how well it will do in London afterwards.

I try to get the last emails of the day sent by 5.30pm so I can slip away to catch the 6.30pm train home. The occasional event aside, I’m very grateful that my role allows me to leave at a reasonable time so that I’m home to give my girls a goodnight cuddle before bed.

Once at home, fed and watered, I make a conscious effort not to look at work emails past 9pm. With emails landing in my inbox from our Asian teams, it can be very tempting to be sucked into late night exchanges. Thankfully, rarely is something so urgent it can’t wait until 6.30 the next morning.

Great insight, Chris – thanks very much!

In a revival of the Natter’s day in the life of...