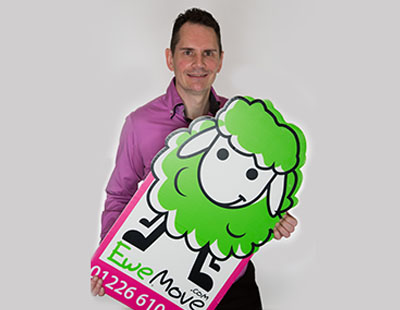 This week we have the Head Shepherd of EweMove, Glenn Ackroyd, in the hotseat. He’s been co-owner of EweMove Sales and Lettings, based in Halifax, West Yorkshire, since May 2013.

After the news broke last month that EweMove has been acquired by Martin & Co, now seems like the perfect time to hear from Glenn.

Where does the EweMove name come from and how do people react to you calling yourself 'Head Shepherd'?

We had two objectives when deciding upon our name. Firstly, to come up with something that was far removed from the image that many people unfairly have of estate agents – that of a dodgy shiny-suited salesperson.

And secondly, to ensure that we stood out from the crowd and were memorable – for all the right reasons.

We’d seen the success of other ‘animal-related’ brands, such as FunkyPigeon and MoonPig, and so we knew that this was a path worth pursuing.

We opted for a ‘Ewe’, not only because of the connotations of friendliness and affability, but because of its phonetic double meaning and the fact that our core focus is always on our clients – ‘you’.

The ‘Head Shepherd’ title is a light-hearted way of reinforcing the point that we're different and that, from a personal perspective, I’m highly approachable.

Our whole brand gives us license to expand on a whole manner of sheep-related puns – think our dedicated Sheep Pen (Head Office), our Flock (our fabulous team), and Ewereka!™ (our award-winning Property Management System).

Do you get offended by agents citing the 'bedroom' element of EweMove and other hybrids?

To be honest, I've loved it! If other agents didn't feel the need to remark on us, it would mean that we weren’t considered a threat.

Being innovative and not frightened of pushing boundaries is always going to attract interest (and criticism) from competitors, but it ultimately goes to show that we’re successfully leading the way in ‘disrupting’ our industry.

Cheap shots about 'bedroom operators' is disingenuous to the incredible work of our franchise partners.

What do you make of the recent trend of established 'traditional' agencies acquiring and investing in online and hybrid offerings?

It's inevitable. The ways in which people buy, sell and rent properties is changing – with technology becoming an even more integral part of the process.

Estate agency is following a similar path to that of the insurance industry, following the introduction of Direct Line in the 1980s. Whilst having a physical ‘office’ is now not as crucial to the industry as it once was, what has remained is the need to have a local person on the ground fulfilling all the roles that traditional agents have always been brilliant at.

To that end our DNA is very much aligned to a traditional agent in terms of personal service and our 'No Sale- No fee' approach.

We certainly won't be following the route of low-cost online house-gambling sales merchants who play roulette with vendors by charging upfront fees with no real guarantee of success.

Carol is synonymous with property following her years presenting Changing Rooms and, as such, is a widely recognised figure amongst our target demographic of 35-65 year-old sellers and landlords. 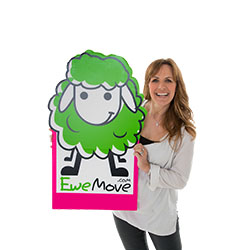 Not only that, she is also a highly trusted figure and it was because of these natural synergies with our own business, that we are delighted to have entered into an initial three-year arrangement with her.

Carol is also fantastic on-screen and we've been able to film her interviewing sellers and landlords to understand and portray their real life experiences with EweMove.

How closely will you be working with Martin & Co?

We'll be working hand-in-hand with the team at Martin & Co. I'm taking up the role of Marketing Director, whilst David will be IT Director for the Martin & Co PLC group of companies.

Our principal roles however will remain focused on the running of EweMove from our HQ in West Yorkshire.

As original co-founders of the agency and having spent a number of years growing it to what it is today, we love it too much to let it go.

We also think there’s a massive synergy between our two businesses. Martin & Co are from the traditional high street world, and we’re a cloud-based, no-office solution that doesn’t require staff. Stripping out these costs is transformational to traditional agents' P & L.

It’s clear that thousands of agents are struggling. They’re being squeezed between the cheap online agents and the corporates.

Martin & Co has a strong record of welcoming existing agents and rebranding them into their proven model.

How have you spent the £8 million?

Sadly, I woke up the next day feeling the same as I normally do.

David and I have built up a portfolio of 170+ houses and the money is a nice buffer against the mortgage debt.

But I did treat myself to a new pair of shoes which resulted in a blister. Proof that money can't buy you happiness!

What is your criterion for taking on a new franchisee?

The most important attribute that we look for is a genuine passion for people, and a real desire to deliver the very best customer service.

And we make sure that our franchisees play a key part in the whole selection process. Our success has resulted in lots of interest in our franchise and we have the luxury of being able to cherry pick the best of the best.

We get over 175 enquiries per new franchisee, which is unprecedented in the franchise sector. It bears testament to our franchisees' rigorous vetting. You certainly can’t get in with a chequebook and a pulse!

Do you think Countrywide closing 59 branches means it will be focusing more on its hybrid offering in the future?

I don't know what Countrywide's plans are, but what is clear is that today's consumer increasingly wants a 24/7 service, and value for money. And, it’s important to clarify that value for money does not mean cheap. It means getting the very best service.

Are you a believer in PropTech or do you just see it as a 'fad'?

We are huge advocates of technology and have implemented a number of innovative tools into our own business. But, we have made sure that wherever technology has been introduced, that it has a real and genuine ability to enhance the customer journey.

Because we as a team are tech-focused, we've been able to build and implement the majority of our solutions in-house.  But, there are some great examples of technology out there that can be utilised across the industry, for example:

- ValPal | has helped us generate thousands of leads

We are also fans of a tool called Zapier which acts as a systems interface between differing pieces of software.

Why do you think Purplebricks has launched in Australia?

That's probably a question better directed at Purplebricks. Growth instead of profit stories appeal to some investors, so having another story is a smart move by the agency.

But I’m a Yorkshire man, which means I prefer my jam today. That’s why we’ve built our business to be profit making now but with all the upside of continued growth.

In your view, what defines a hybrid estate agency?

The terms ‘hybrid’ as well as 'online' are widely misinterpreted as meaning DIY and cheap.

This couldn’t be further from what we do. For us, it’s about combining the very best technology with the best elements of good old-fashioned estate agency – which at the end of the day is a people business.

It means having a local and trusted person on-the-ground who can harness the real power of cutting-edge IT to provide customers with the best customer service experience possible.

We recognise that every individual is different and has differing needs when it comes to buying and selling property, which is why we’ve invested heavily in ensuring that our service fits every one of those needs.

Why I've said no to PLC approaches ...

Do you remember Martha Lane-Fox? She was the poster girl for...

At the back-end of last year and the start of this,...