By John McKay
< Back 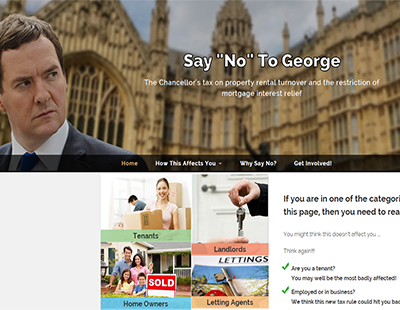 A new website has been launched to fight back against the attack George Osborne made in the Summer Budget on the UK lettings market.

Two Peterborough landlords have combined forces to create www.saynotogeorge.co.uk and demonstrate the potential effects that the Chancellor’s limitation on mortgage interest relief will have on buy-to-let investors and many others in the country...

UK private landlords provide housing to nearly four million members of the population and generally do a fantastic job with high standards despite increasingly tough legislation.

Unfortunately in recent years we have been vilified by some charities and the media, who don't understand the work we do and who have presented landlords in an extremely distorted light.

Perhaps as a result of this misinformation, the Chancellor announced in the Budget the astounding news that he was abolishing landlords' rights to offset 100 per cent of finance costs of running our businesses and limiting this to 20 per cent.

This is unheard of in business and goes against all logic and reasoning. He presented the change in such a misleading way, though, that many landlords have still not realised how devastating this will be for their businesses.

To confuse matters more, the Chancellor has said that he is concerned that BTL investors will destabilise the housing market when they can’t meet mortgage payments due to interest rate rises, but this makes no sense.

Lenders allow for interest rate rises in affordability calculations when they grant mortgages.

It is, ironically, this tax change that stands to make landlords' mortgaged property unviable and therefore do exactly what the Chancellor says he wants to avoid.

In addition, he says he wants to ‘level the playing field’ for first-time buyers, and again this change will not help them at all.

It’s not just us saying this; some of the country’s top economists, including the Directors of the Institute of Fiscal Studies and Institute of Economic Affairs have stated that the proposal does not make sense and that only building new housing will help first time buyers.

It seems then that the Chancellor has perceived us as a soft target for topping up the country’s coffers without thinking through the consequences. Say No To George has been created to show what the possible or likely outcomes will be from this tax change.

I’ve heard people say that rents can’t go any higher and they’re not linked to operating costs, but they are wrong.

With this tax change many landlords will pay a tax rate higher than 100 per cent of their net profit, which is absurd. Where will they find the money to pay these bills? They will have to either increase rents substantially, or if unable to do so, will need to dispose of properties thus evicting tenants. These are the plain facts.

Our campaign is to get this proposal scrapped before it dramatically exacerbates the country’s housing crisis.

Right now we have more people living in B&B accommodation than we have had in years and once again unemployment is on the way up. If this proposal comes into law what we have now will seem like a walk in the park!

We urge everyone to sign the petition and to write to their MPs, Brandon Lewis (the Housing Minister), George Osborne and David Cameron.

We simply must say NO to George.

*John McKay is a landlord and founder of Peterborough Property Investors Group, also known as PetPIG. He says he will be obliged to increase rents as a direct result of the Budget tax changes as soon as interest rates rise.

Landlords' plans will change in wake of tax relief cut ...

Wednesday’s budget proved a grim viewing for those who have worked...