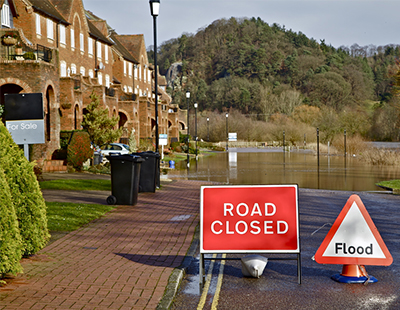 The government should reset planning policy and scrap proposals for thousands of new homes in high-risk flood areas.

The think-tank Localis, in a new report called 'Plain Dealing – building for flood resilience', reveals that almost 200 planning permissions have been granted on floodplain land so far this year for 5,283 new homes in the highest-risk local authorities in the country.

The overwhelming majority - some 4,255 - are in areas identified as highly likely to flood.

“In this context resilience means flood strategies that focus on living with floods instead of just preventing them and involve a flexible approach to flooding and a rapid recovery from inundation” the organisation says.

Other report recommendations for policy and regulatory changes include one to make developers liable for the sustainability and insurability of any new developments built in floodplain areas.

Localis chief executive Jonathan Werran says: “There is a clear need to reset government policy and regulation to prevent an otherwise unavoidable 50 per cent uptick in the numbers of houses being built on floodplains over the next half century.

“At the same time, with climate change another unavoidable reality, we need to strengthen communities to become resilient in adapting to, living with and responding to flood pressures.”

Localis also cites Martin Milliner, claims director at LV= General Insurance, who says: “Whilst we welcome the government’s commitment to increase housing we have concerns about the UK’s resilience to future flood events, and in particular the number of new housing developments in flood risk areas that are still receiving approval.

“With those involved in the planning process ignoring the current guidance, this runs the risk of putting an ever-increasing number of communities at risk.

“Flooding is an extremely traumatic event which has a devasting impact on a person’s life, both physically and mentally. This research highlights a concerning amount of current and future development in high flood risk areas.

“To tackle this, we need to come together and develop a holistic approach to flooding for the long term, with property developers, insurers and government – both nationally and locally – tackling the issue of building on floodplains.”

A typical comment accompanying news of the UK heatwave is that...

Phil Spencer: This is why agents should Go Green ...

The push for greater sustainability, energy efficiency and generally being ‘green’...

A  mortgage expert says surveyors should improve their standard services to...