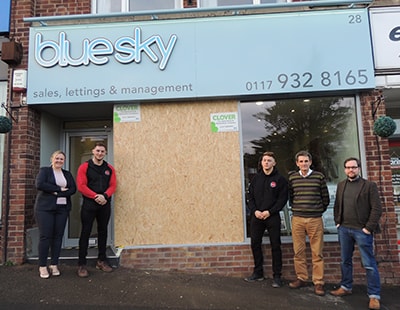 An estate agency has started a petition to get bollards erected outside its branch after two accidents, in each of which a car crashed through a window and into the office.

The most recent incident happened on Saturday January 27 and, as you can see from the photographs, a car mounted the pavement and embedded itself in the office of the Blue Sky sales and lettings agency at Longwell Green in Bristol.

“We were open and staff, on seeing the car coming towards them, ran to the back of the office. Luckily no one was seriously hurt and our shop window took most of the impact” company director Juliette Maytham told Estate Agent Today. The driver was unhurt, too, and thankfully there were no pedestrians passing by. 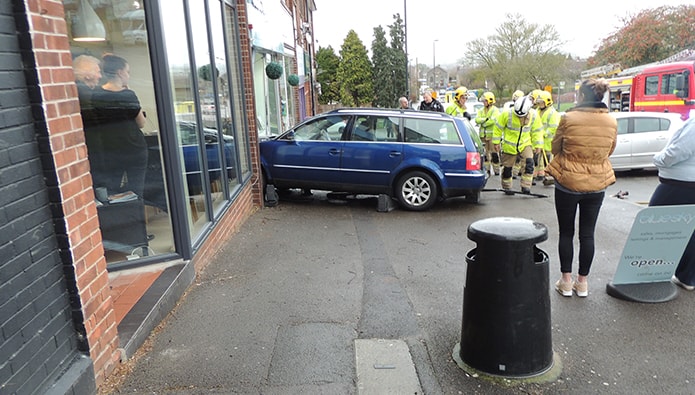 However, this was not the only mishap for the Blue Sky team.

Back in July of last year a motorist blacked out at the wheel, mounted the pavement and crashed into another part of the firm’s office.

“Again it was around 10.20 in the morning and the office was open. Luckily again no one was seriously hurt. The police, fire brigade and ambulance all attended and local residents stepped in to help clear the area after the car was removed” explains Juliette.

The force of the car’s movement on that occasion was considerable - it completely flattened a metal post displaying parking restrictions. 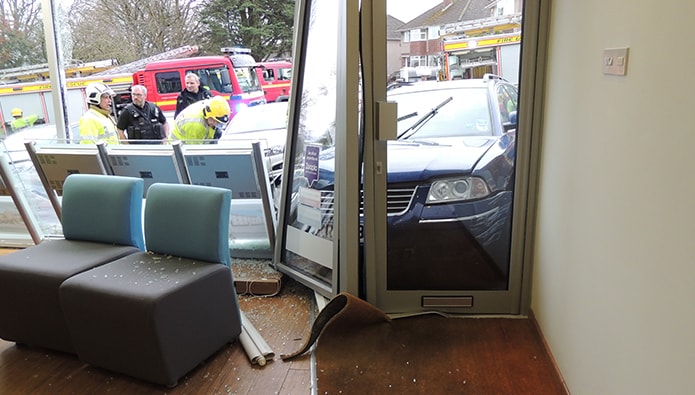 Now, after discussions with local council and Highways Agency representatives, the agency naturally wants something done to prevent a third calamity.

South Gloucestershire council has helpfully proposed bollards to stop any car getting as far as the agency or other businesses in the terrace of shops - but, as with much council expenditure, it is subject to the council being able to afford the expenditure when it considers its 2019/20 budget.

So now Blue Sky has started a petition which it hopes will get support; it calls on the council to prioritise the erection of the bollards.

Even if you do not live in the area, you probably appreciate how vulnerable your office might be if a car was out of control.

If you want to back the Blue Sky team and keep them safe, the petition can be found here.

The Royal Institution of Chartered Surveyors has launched a comprehensive guide...

One of the founding agents behind Agents’ Mutual and OnTheMarket and...

Police called in after 'gun' spotted on Rightmove listing photo ...

Police were called in when an anxious resident spotted what appeared...

A housing association has launched an ‘ethical’ sales and lettings agency. Two...