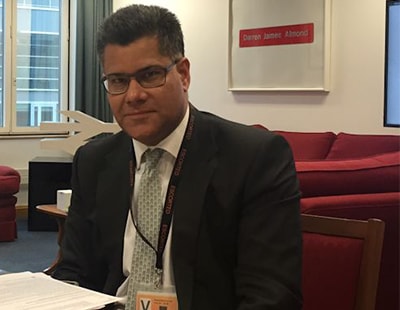 Housing minister Alok Sharma has blocked some of his Twitter followers, accusing them of “abusive language”.

Sharma has a relatively modest 9,169 followers on the social media service and is markedly less ‘followed’ on social media than recent housing ministers, many property professionals and even industry journalists.

However, on Saturday he tweeted: “The reason I have started blocking is not for asking questions but for abusive language, as below.”

Sharma’s message then linked to another tweet, written by a follower named Tahir Ahmed, saying: “What a coward. Shameful disgraceul for asking a legitimate question about a manifesto promise made in 2015. Scum Tories!!”

It was not clear from an analysis of Sharma’s Twitter timeline as to the extent of the alleged abuse. However, in the Commons last week another Conservative MP, Simon Hart, claimed the hashtag ‘Tory scum’ “had become a regular feature of our lives".

Whereas the previous housing minister Gavin Barwell - who became Theresa May’s chief of staff after the General Election - extensively used Twitter to promote housing policies and his activities as housing minister, Sharma has taken a more personalised approach.

He has used the platform to retweet government and departmental announcements about help for Grenfell Tower victims and the testing of cladding as a result of the tragedy; he also used Twitter to apologise for his non-appearance at the Chartered Institute of Housing conference at the end of June.

However, most of Sharma’s tweeting has been about constituency work in Reading West; Sharma’s majority was 6,004 in the 2015 General Election but was reduced by more than half to just 2,876 at last month’s poll. Over the weekend, Sharma published tweets about a meeting with local sea cadets and meeting local National Citizen Service representatives.

However, Sharma was at the centre of another dispute on Saturday; his local newspaper reports that he arrived at a park in his constituency to open a French-themed Bastille Festival. However, as he stepped on to the stage three protestors blocked his way.

They held a banner reading 'Justice for Grenfell, Shame on Sharma', in reference to the Grenfell Tower fire.

The Reading Chronicle website cites an eye-witness saying: "Three people stood in front of the stage with a banner. Everyone told them to move but they just weren't going anywhere. The police turned up after about half an hour. They continued to stay there for another quarter of an hour. Then Sharma did his speech and they left. The protestors were two men and one women. Probably in their early 20s."

Harry Hill - former chief executive of Countrywide and founder of...

A regional estate agency has urged the Government and the new...

The property industry has broadly welcomed the appointment of a new...