Rightmove’s new chief financial officer has a basic salary of £390,000 plus bonus options coming to...

It’s been a remarkable week for Britain and a challenging week for the agency industry - with possibly many more to come. Even so, you’ve held the industry’s head up high with your great work for good causes.

Here’s our usual reminder - we love publicising agents’ charitable activities, so do please let us know on press@estateagenttoday.co.uk.

That’s what these heroes did...

Members of staff from the 10 regional offices across the Midlands pulled together to raise more than £7,700. The money Rainbows has received will go towards the care and support of children with life-limiting conditions and their families.

Kate Golding, Corporate Partnership Manager at Rainbows, says: “We would like to thank John German Estate Agents for all of the hard work they have put in over the year, their fundraising has been amazing. Without the support of companies like this, we simply wouldn’t be able to open our doors and provide the invaluable service that we do for our children, young people and their families.” 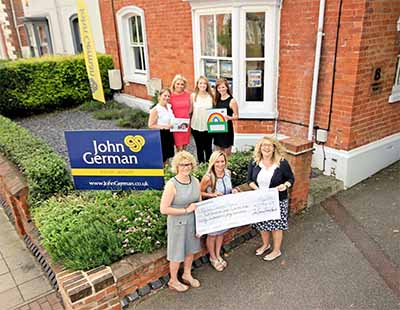 Convey Law: Newport-based Convey Law has been named as a leader in people management practice globally, having been shortlisted in the Excellence in Social Responsibility category in the third annual Investors in People Awards.

Finalists in the IIP awards are expected to demonstrate that social responsibility is not just a policy, it’s driven from the top and rooted in the culture of the whole organisation. Convey Law was shortlisted for its achievements in company staff training and development, offering a host of employee benefits, and an engaging charity fundraising programme.

Duston branch manager Paula says: “We have sponsored Jodie for three years how and what really stands out is her dedication and commitment to her sport. So we decided this year that a physical challenge was the one for us and the idea of climbing Snowdon developed.”

The estate agency which is part of the Nottingham Building Society, has been working with the charity since 2013 and during that time, has supported 95 aspiring athletes including freestyle skier Will Gilmore from Brackley and basketball player Sarah Round from Collingtree.

Garden House School Charity: For the second year in a row, W.A.Ellis was one of the headline sponsors for the Garden House School charity quiz night, hosted at The Royal Hospital, Chelsea. Attended by over 350 parents, the agency and one of the top nursery and pre-prep schools in the country raised close to £250,000 for The Book Trust, the largest reading charity in the UK.

As part of this sponsorship, W.A.Ellis also encouraged the children of Garden House School to enter into a painting competition that focused on ‘Ask for the World’ as the main theme. W.A.Ellis chose a winning entry out of approximately 40 submissions; this will then be turned in a window display for the Brompton Road office, feature in the school’s upcoming newsletter, and made into a bookmark for all the pupils of the school.

Respected political commentator, journalist and author Andrew Marr treated guests to an illuminating insight on Brexit and spoke movingly about the life of MP Jo Cox.  Another highlight of the afternoon was industry legend Harvey Soning of James Andrew International being awarded the 'Lifetime Achievement Award' by his long standing friend and Derwent London supremo John Burns.

Agents Do Charity - and a donation to Sir Elton John's Foundation ...

We may all be reeling from the surprise Autumn Statement stamp...

Agents Do Charity - the sunshine edition... ...