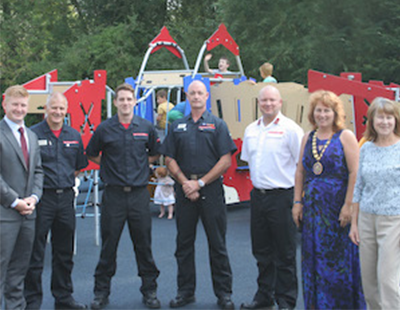 An estate agent has been nominated for a national award as result of his local campaigning to help rebuild play equipment in a local park.

Matt Nicol, managing director of Nicol & Co estate agents in Droitwich, Worcestershire, has been shortlisted as one of three finalists for the Community Crowdfunder of the Year award at the JustGiving Awards 2015.

Last summer Nicol helped to raise more than £16,000 in just two weeks after vandals set fire to play equipment in a local park, destroying the majority of it.

The success of his crowdfunding campaign allowed the equipment to be replaced quickly, and before the end of the school summer holidays.

“I was probably one of the first people to see the photos the morning after it happened, and it really wound me up when I saw it. It was just frustrating,” he told the Droitwich Spa Advertiser.

Just Giving only allows people to raise money for registered charities, so father of two Nicol set up his campaign in the site’s crowdfunding section with a fundraising limit of £5,000.

“It very quickly overtook that,” he said. “I wasn’t surprised, because I know the community are really fantastic, but it was a good result, the speed of it surprised me, because I’d set up the page, I was getting an email every time a donation went on, and it was massive really really quickly.”

Nicol told Estate Agent Today that he is proud to have got the fundraising underway and that he was honoured to be asked back to re-open the playground.

“As an industry I believe we [estate agents] have suffered in the past from a negative reputation but certainly from what I see there are more and more agents taking a pro-active approach in the community,” he said.

The JustGiving Awards are determined by votes from members of the public, and you can vote for Nicol before the August 30 deadline here.

The winners will be revealed at a ceremony in London on Wednesday September 23.

Leads For Agents - Boomin and Zoopla at odds over ‘what is a lead’ ...

Zoopla has issued a data-heavy statement on its services for agents...

Young agent “off to a flier” and expands with new branches ...

A young franchisee with hybrid agency EweMove is expanding into another...

If you were hoping for a summer lull during August, think...