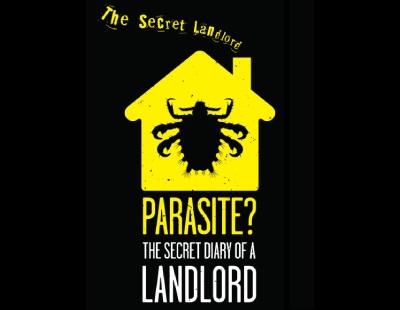 If a letting agent wants to persuade a reluctant landlord to take up their services, this is the book to ask them to read.

Like a recruiting sergeant for professional property management, this chronicle of a landlord’s year reads just a little too much like a misery memoir.

And it’s this intense focus on the problems that gives the book its greatest strength and its greatest weakness.

The strength is that it shows how even a genuinely experienced, caring and hugely able landlord - and the book’s author is all of that and more - can’t be expected to keep across the flurry of legislation and regulation that now ties up the private rental sector to such a degree that many landlords want out.

SL (Parasite’s author wants to remain anonymous) genuinely likes some tenants, truly wants to do good by providing homes for those who can’t or don’t buy their own, and accepts being a landlord carries as many responsibilities as rights. She’s a good person.

But the weakness is that she’s at the end of her tether, and anyone in the early stages of thinking about becoming a landlord would run a mile if they read this.

Those ever-increasing rules, the anti-landlord mood-music from government, and higher and higher expectations from tenants have …. well, they’ve got to this landlord, who spends a year in something approaching daily misery if this diary is accurate.

I’m a landlord, too, and so are many of my friends. Life is complicated and less profitable than it was, but there are upsides too, not least financially.

Little wonder that (slight spoiler alert!) she says at the very end of the book that she did something about it all to ensure she got a life again.

But there are rewards to being a landlord, too, and the book would be stronger if they were given more space. SL used to socialise with some of her tenants, and while that may be in the past - she admits she wouldn’t try it now - giving a sense of the upsides of being a landlord would provide a more balanced tone.

In the tiny canon of works by landlords about being landlords, this is undoubtedly detailed and contemporary - it’s just that it’s a bit, well, miserable. Look around the world…life can be a lot worse than being a landlord, even in 2020.

Parasite: The Secret Diary of a Landlord is published by Alethea and you can buy it here.