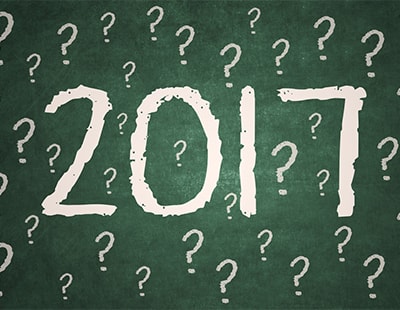 It’s traditional before Christmas to either review the year past or anticipate the one ahead - but I’m intrigued about what was supposed to happen over the past 12 months, yet didn’t.

In the wider world pundits predicted the Conservatives would walk the next General Election, that right wing populists would win elections in Germany, France and Holland, and that England would fail to qualify for the 2018 World Cup. Well, they were all wrong.

Some pundits in the agency industry had dodgy predictions too: these are my favourite five non-happening events of the year just closing. Please let me know if there are others I should have covered (and when doing so, feel free to overlook my own personal predictions a year ago that turned out to be hopelessly wrong).

Oh, and in the meantime, have a good Christmas and New Year....

1. Letting agents’ fees ban: This may be on its way but what happened to it in 2017? It was first announced, after all, on November 23 2016 and in the intervening 13 months a consultation process has been held and the ban formally agreed by government. But it’s not been implemented. I’m in no rush to see it implemented but why this delay?

It’s popular to blame Brexit for legislative backlogs but given a template operates already in Scotland, it would not be too draining of civil service or political resources to finish the job in England.

Perhaps the fact that agents are already pulling back their fees (notice how few stories there have been on this subject in the consumer media recently?) means the job has effectively been done without the need for a law.

2. Twenty per cent of agencies going bust: On more than one occasion in the past year the industry has been warned that as many as one in five estate agency businesses face closure - not because of a downturn, but because of online rivals.

I’m neither underestimating the pressures on traditional agencies nor denying the changing face of the industry but dire warnings of mass job losses - most recently by Moor Stephens accountancy firm - proved wide of the mark in 2017.

It’s clear that Purplebricks has made significant impact on the industry but as for the other online agents? It’s too early to say, but their gains in the past year seem less than remarkable.

3. The Brexit house price slump: Who can seriously deny that the endless soap opera of the UK’s hapless exit from the EU is doing anything but sapping the lifeblood from the economy and from the country’s reputation worldwide? However, it hasn’t led to the housing market bloodshed predicted in the six months after the 2016 referendum result.

Localised issues undeniably exist - ask estate agents trying to sell homes in central London, or letting agents in areas of East Anglia where migrant workers have left in droves over the past year. But those pundits who within hours of the Brexit result forecast two years of double digit price falls (and unfortunately for them, their words are easily found via Google) were as mistaken as those Brexiteers who predicted a pull-out would be easy.

4. The exodus of landlords: As a landlord myself, I’m more than aware that recent tax changes - notably the phasing out of mortgage interest relief, which started in April 2017 - is making buy to let less profitable. Yet what happened to the flood of landlords quitting the sector as predicted by a few campaigners and some trade bodies? It didn’t happen.

The monthly market snapshot produced by the website Home described the exit of landlords just a few days ago as ‘a trickle’ and talking to letting agents (including the one I use) there’s no sign of the mass sell-up predicted by some siren voices. Growth within the sector is certainly negligible but as for the forecast of mass defection...it didn’t take place.

5. OnTheMarket becoming the second largest portal: Like the queasy feeling after too much cheap booze at the office party, OTM’s failure to live up to its own promise to displace Zoopla as Britain’s second portal has become something of an annual tradition.

While some OTM directors look set to be amongst the best-paid in the industry after the Agents’ Mutual 2018 float, there remains fog around real data revealing membership and fees, and a heavy mist over site visits. Like Purplebricks’ completion rates, such figures did not appear in 2017 despite much anticipation.

I hate to be a party-pooper, but one of the agency industry’s...

Towards 2019…with certainty in an uncertain world ...

It’s that time of year when we gaze to the future,...

How my predictions on agency and PropTech from recent years have come true ...

The last 18 months have been full of ups and downs,...