One of the key factors associated with an active private rental market in the UK, as detailed in the Dataloft PRS Squared Index, is a strong local economy. It is the locations where digital technology industries are clustered which have benefitted from the fastest growth in recent years.

A report published this year, but prior to the EU referendum, by Tech City UK suggested that digital technology industries employed 1.56m across the UK and were growing 32% faster, in terms of turnover (£), than the rest of the UK’s economy. Cambridge, Bristol and Edinburgh were highlighted as places that had benefited from growth in this sector.

On a global scale it was also highlighted, in an OECD/McKinsey report in August (post-referendum), that the UK ranked top in its digital share of overall GDP (10%), higher than the USA (8%) and Sweden (7%). This puts the UK in a strong position on which to build in a post-Brexit world.

London is now regarded as the Fintech (financial technology) capital of the world, employing over 44,000 professionals, more than either New York or the Silicon Valley. The average digital salary across London in 2015 was £58,978, substantially higher than the London average of £33,203. This growing industry is likely to attract a new, younger demand base for property markets across the capital, particularly PRS and prime markets. 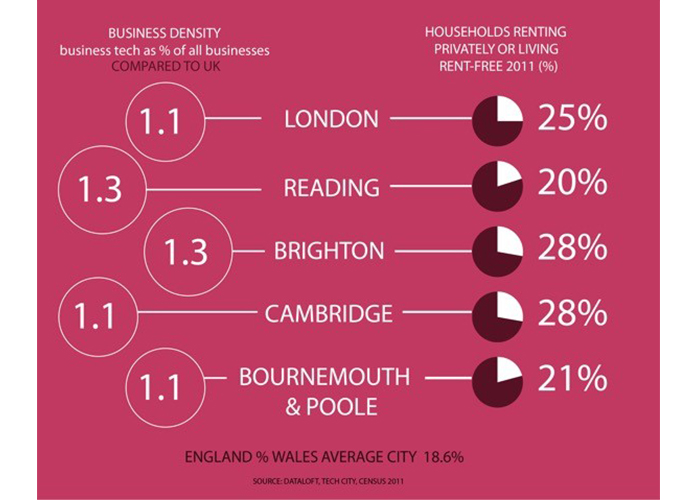 In 2013 Level 39, a 80,000 sq ft, technology accelerator opened in One Canada Place in the heart of Canary Wharf’s financial district. In the same year, Here East was established at Queen Elizabeth Park, Stratford as the development of the biggest technological innovation centre in Europe (1,2m sq ft). BT Sport has been a tenant since it opened.

Despite the shock and uncertainty surrounding the UK’s Brexit vote there have been several promising announcements made by big blue chip tech companies expressing their commitment to the UK. These include:

The Government recognises the risks to economic growth as a result of leaving the EU and the Chancellor has responded by announcing in the Autumn Statement that they would invest £4.7bn over four years to ‘enhance the UK’s position as a world leader in science and innovation’.

After several flat years of public investment in R&D this represents a significant increase equating to an additional £2bn per annum by 2020/21 for businesses and universities to invest in these areas. A further £1bn was allocated to invest in full-fibre broadband and the trialling of 5G mobile networks.

This welcome boost to public funding for the UK tech sector should provide a stimulus to attract additional private investment which in turn will result in local employment opportunities and, furthermore, will fuel housing demand particularly in the PRS in these local areas.

*This article was compiled by Dataloft senior analyst Carrie Scrivener-Leask

Data is a conversation starter (really!) ...

Rather like doctors, estate agents are present at critical points in...