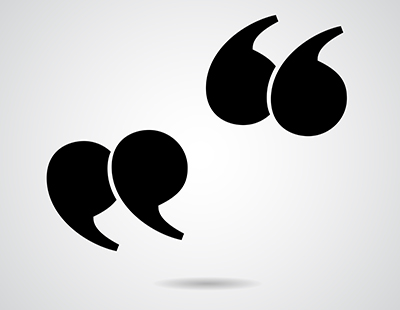 Forecasts are so last year: who anticipated Bowie, Brexit or Balls for example?

Quotes, on the other hand, really ARE last year - or at least the quotes I have assembled as an interesting way of looking at what happened in the past 12 months.

It’s been (another) year of surprise, shock, anger and frustration for many in the agency business. Here’s a key quote from each month, taken from Estate Agent Today, Letting Agent Today or from social media, to sum up the big events that influenced our industry.

They are not a definitive record of what happened - typically, quotes are just opinions, after all - but they are a reminder of a hectic period. With luck, they’ll act as justification for your well-earned period of ‘feet-up’ for a few days before it begins all over again in January.

“We have already revealed this year that we have achieved the support of 6,500 estate and letting agent offices – a 50 per cent increase on this time last year – and we are now on our way to our next milestone of achieving support from 7,500 offices. There are many areas of the UK where we are already the number 2 portal in terms of available residential listings – and have been for a long time – and many others where just a few extra offices would push us over the line.” - OnTheMarket, in a statement marking its first anniversary.

“Detractors would be a little premature to assume this means there’s going to be a change of plan. You can either do this scale of reorganisation incrementally and feel the pain over some time, or you can do it in one operation and get it done, as we have. Now we can get on with business.” - Alison Platt, chief executive of Countrywide, in an Estate Agent Today interview after the group’s 37 per cent profits slump for the 2014 trading year.

“The preferred model being proposed is a privatisation of Land Registry consisting of a contract between government and a private operator, with all the core functions transferred out of the public sector, but with key safeguards for Land Registry customers and government being maintained ... The sale of Land Registry will allow government to pay down debt, or enable other investment for the benefit of taxpayers. It is expected that a move into the private sector would also allow Land Registry to become even more efficient and effective as part of its transformation programme.” - Statement from the Department of Business Innovation and Skills, issued at the start of the Easter Bank Holiday weekend, announcing its formal consultation process on privatisation.

“By carefully marrying-up data for the exact apartment number within each development in the Battersea regeneration area over time, we found data which suggests that there is an active estate agent and a home builder who have been listing, removing and then ‘immediately’ re-listing properties” - Michelle Ricci, founder of data company Propcision, in a report privately cited by some industry bodies as being the document that led to portal juggling being taken seriously by the authorities.

“It’s not as simple as saying that Brexit would have a positive or negative effect on the property market. We might like to believe, for example, that the ease in demand and lower prices will allow first time buyers a route into the market, but any transactions may be put off for the short term until the period of uncertainty is over. An ease in demand is likely to be matched or outweighed by a decrease in housing stock, not just from reduced labour ... but also from decreased accessibility to building materials produced in non-UK EU countries. Ultimately, it could have long-lasting and damaging consequences.” - Mark Hayward, managing director of the National Association of Estate Agents.

“House sales expected to fall 20 per cent. House prices expected to fall 15 per cent. Sterling crash makes UK prices 10 per cent lower for foreign buyers already” - Henry Pryor, the buying agent and market analyst, a few minutes after the formal announcement that the result of the EU Referendum was Leave.

“These are regressive measures which add complication to a hugely complex tax system, hinder labour mobility and are economically damaging ... Stamp duty is a disastrous and unfair tax which leads to the misallocation of housing stock and leads to lower incomes and higher unemployment than necessary. It doesn’t even raise much revenue, once dynamic effects are fully accounted for.” - TaxPayers’ Alliance, in response to the effects of the additional homes stamp duty surcharge introduced in April.

"By ending the Right To Buy we are protecting up to 15,500 social homes from sale over the next 10 years and safeguarding this stock for future generations." - Scottish housing minister Kevin Stewart, announcing his country as the first in the UK to scrap RTB. Nine days later, the Welsh Government announced it would do the same within 12 months.

“Landlords would pass costs to tenants via rent. We’re looking at other ways to cut upfront costs and raise standards.” - Housing minister Gavin Barwell, when asked on social media if he supported a ban on letting agents‘ fees levied on tenants.

“It will be tenants who are hit hardest; they are set to see unprecedented rent increases over the coming months and years, which will be a very clear and direct consequence of this ludicrous legislation. For many, it will also mean the loss of their homes because vast numbers of landlords will be forced to exit the market. Hard-working, responsible landlords will have their pension plans in ruins.” - Landlords Steve Bolton and Chris Cooper, after being denied a judicial review of Section 24 of the Finance (No 2) Act 2015, introducing a phased cut of mortgage interest tax relief for landlords paying higher rates of income tax.

“Every time you mention the word ‘estate agent,’ everyone gets a little bit of a smile on their face and an inner feeling of unhappiness ... Most people wouldn’t tell you that they were an estate agent if they were in the pub, would they? What we wanted to do is make them proud to go out and tell others they’re an estate agent.” - Purplebricks chief executive Michael Bruce telling City AM about Local Property Experts.

“Landlords have clearly pulled out of the market and are unlikely to return any time soon. This is entirely the result of government policy, with Theresa May now picking up George Osborne’s baton and proceeding to bash landlords with renewed vigour ...The government is making a conscious decision to put landlords on the block for a property market that isn’t working for first time buyers or Generation Rent.” - Paul Smith, chief executive of Haart, commenting on the government pledge to ban letting agents’ fees on tenants, the additional homes stamp duty surcharge, stricter lending criteria applied to landlords, and confirmation of the phased reduction in some landlords’ mortgage interest tax relief.

I hate to be a party-pooper, but one of the agency industry’s...