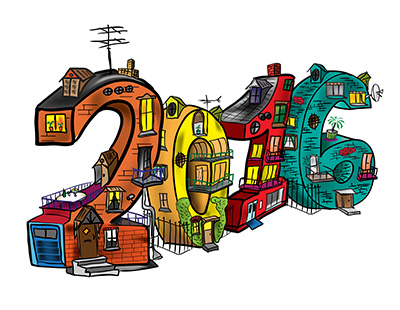 There’s been plenty of forecasting in recent weeks - banks, consultancies and high-end estate agents have predicted house prices in the year ahead to one decimal point.

Trying to be precise when so many external factors influence house prices risks turning the exercise into...well, a load of crystal balls.

So I’m sticking to broad trends: here are my 10 things to look out for in the worlds of agency and housing in 2016. Remember – you read it here first, unless these are all wrong in which case I hope you will have forgotten my predictions over the next 12 months.

1. The Rise and Rise of Countrywide: Written off by some – including a few of its own investors – my money’s on new CEO Alison Platt doing dramatic things. Expect a few old brands to be scrapped (upsetting old-school agents) and a Countrywide online service operating by next winter. Expect some sharp barbs from Harry Hill.

2. Someone Will Try To Buy OnTheMarket: Of course in theory it’s a mutual and it’s not for sale – but CEO Ian Springett said last summer he was surprised there hadn’t already been a bid. Given its slow progress to date and its down-sized ambitions, pressure to sell may come from one of its founding agents no longer willing to give it time.

3. Agents Will Diversify: More will offer property management, mortgages and property-related consumer activities. The reason? Purely and simply to broaden agents’ exposure to new markets and lessen their reliance on traditional sales: in 12 months time, I doubt there will be any great increase in transactions, and therefore fee income.

4. There Will Be More Buy To Let Landlords, Not Fewer: Siren voices saying landlords will quit over tax breaks, stamp duty or greater regulation will have proven wide of the mark. Sure, BTL will be tougher than before but with the proportion of households privately renting set to rise to 29 per cent by 2020, why would landlords leave now?

5. No Other Online Agency Will Float in 2016: Purplebricks will not hit trouble but its progress from its 100p launch price will be sluggish. easyProperty and eMoov have shown there are other ways to get major investment so those onliners remaining at the top of this small sector will pursue other fundraising efforts than the IPO.

6. Ola! Spain Will Be Back: Remember those days when even small independent agents dabbled in overseas property sales of cheap Spanish villas? They may be less cheap than before but as the Spanish recession fades and buying holiday homes in Britain get more expensive (thank you, Chancellor) so agents will again sell a few overseas fincas.

7. Expect More Build To Rent: Some forecasts say five per cent of private rental sector homes by 2020 will be purpose-built via institutional investments, so this is an easy prediction. More speculative is where BTR will look when it trickles down from London. Manchester looks likely but some say smaller provincial cities are ripe for BTR, too.

8. Interest Rates Will Rise: Okay, okay – so most people say the same, but a few actually believe the wider UK recovery is so fragile it could be 2017 before interest rates rise. The smart money (bet by those smarter than me when it comes to economic policy) is that there may be three very small gradual rises  evenly spaced from May to December.

10. A National Landlord Licensing Scheme Is Introduced: Why have a patchwork quilt of different schemes run by different councils with different penalties for rogues? The government will do what Labour suggested at the 2015 election and set up a nationwide scheme. Ironically, councils will almost certainly be asked to operate it.

Knowing too much about property can be a disadvantage ...

Public relations used to be a minor part of estate agency,...

Let’s begin with total transparency from this author: I believe there’s...