As the great sporting summer continues – with the Lionesses triumphant against Germany last Sunday, the ongoing Commonwealth Games, and the start of the new Premier League season this evening – the fundraising efforts of our industry continue unabated.

A quick reminder – if you have charitable exploits you want the rest of the industry to hear about, please email us on press@estateagenttoday.co.uk, or contact us on social media, and we’ll do the rest.

Convey Law: It was a case of back to school for Convey Law’s Director of IT, Joe Norris, when he returned to his old school in Pontypool, South Wales, to donate 40 much-needed laptops. Norris, who attended St Alban’s RC School, was delighted to meet children and some of his old teachers when he returned to make the donation of the reconditioned Chromebooks to aid learning development at the school.

“It was great to be back and meet some of my old teachers, headmaster Stephen Lord and a number of the current teachers and pupils,” he said.

“We need to continually update our equipment at Convey Law because of the nature of our business as an online conveyancing practice. We were keen to donate some of the Chromebooks our staff use which are still in excellent condition to somewhere which would really benefit.

He added: “We already had links with the school and we contacted them to offer the Chromebooks which we have wiped and cleaned ready for the pupils to use. I was delighted to go along and officially donate them on behalf of Convey Law.” 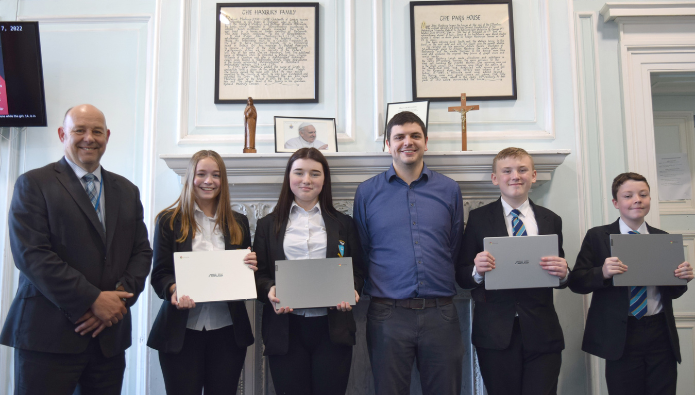 Headteacher Stephen Lord said: “We are really grateful for this generous donation. We will be sharing these Chromebooks with some of our most vulnerable pupils to help them access their studies and I know they will make a real difference and be very beneficial to them.”

Lloyd Davies, Convey Law’s Managing Director, said: “We are always keen to ensure that computer equipment is recycled where it can be to aid our local communities. We have previously donated laptops to a youth centre in South Wales so this is our second recent donation.

“I am delighted they are going to be used by pupils who really need them to help their education.”

Earlier this year, The Conveyancing Foundation, the not-for-profit charitable arm of the Convey Group, helped to raise £25,000 for a new health and wellbeing suite at St Alban’s after a group trek by the ‘Mindstep Trekkers’ along Offa’s Dyke national trail.

The Guild of Property Professionals: The body was acknowledged at the recent Agents Giving Charity Ball as one of the organisation’s largest fundraising partners for the grant fund scheme.

Iain McKenzie, CEO of The Guild and an Agents Giving board member, said: “Agents Giving is an organisation that has done so much for the sector and suppliers, helping to support fundraising endeavours that will ultimately impact local communities in a positive way. We are very proud of our association and relationship we have with Agents Giving, and we are glad that The Guild can support them in supporting the sector.”

McKenzie said that in 2020, The Guild pledged to donate £50 to Agents Giving for every successful referral completed.

“We wanted to use the size of The Guild network to make a difference and support charitable causes that will improve people’s lives,” he explained.

“With a network of approximately 800 independent estate agencies, the potential financial benefit could be significant. Initially we were driven by the financial impact the pandemic was having on charities and their growing need for additional support, however, with inflation and the cost of living now an issue, many charities are struggling and need assistance to keep doing the work they do. We hope that our contributions to Agents Giving will help more agents achieve their fundraising goals for those that need it most.”

McKenzie says that around 25% of leads are converted to instructions, of which 50% are completed. “The automated referral system will generate additional business for our network, while simultaneously supporting Agents Giving. The more completed referrals, the more money we will be able to contribute.”

David Newnes, Agents Giving Chairman, offered a ‘tremendous heartfelt thank you’ to The Guild and its members for their continued support to Agents Giving.

“Your donations will mean we can continue to help support the industries fundraising efforts through the Agents Giving Grand fund ensuring more of the money raised goes directly to even more UK charities on a national, regional, local and community level, especially during this difficult time when so many charities need additional support.”

Keepmoat Homes: Bluewater shopping centre in Dartford, Kent, is working with Lennox Children’s Cancer Fund on the charity’s “A Star for a Star” campaign – sponsored by Keepmoat Homes - to help raise awareness and encourage local businesses to get involved.

The initiative, which launched last week, enables local businesses to sponsor a star which will be displayed within a public exhibition at Bluewater between August 28 and October 2.

The housebuilder, whose Cable Wharf riverside development is close to Bluewater, has become the first business to support the charity and will be the official campaign sponsor.

James Waugh, Centre Director at Bluewater, said: “We’re honoured to be hosting this exhibition for such a worthy cause here at Bluewater and it’s great to be able to support such an admirable charity like the Lennox Children’s Cancer Fund.

Vicky Nash, Family Support Manager at Lennox Children’s Cancer Fund, added: “When a child is diagnosed with cancer, the financial toll on a family is immense; we help these families by providing vital Care & Crisis grants.

“Bluewater has given us the opportunity to showcase our incredible work. Raising awareness of this terrible disease by approaching local businesses and asking them to sponsor a star will help us raise these critical funds and continue to support these incredibly brave children and their families during this time of emotional devastation and financial strain. Thank you so much to Keepmoat Homes for opening this campaign and sponsoring the first star.”

Mick O’Farrell, Regional Managing Director at Keepmoat Homes, said: “We are immensely proud to be working with Lennox Children’s Cancer Fund and Bluewater on such a fantastic initiative. The Star for a Star campaign is a fantastic way for businesses to get involved and show their support for families who are undergoing vital treatment.

He added: “We hope that Lennox Children’s Cancer Fund raises a huge amount to help support the incredible work that they do with young people and their families – the children affected are the real stars here.”

Agents Do Charity – running and fundraising as the weather sizzles ...

We’re undergoing another heatwave at the moment, with the mercury rising...

Agents Do Charity as we head into a cold November ...

The clocks have fallen back, the nights are longer and the...

Welcome to this week’s Agents Do Charity - another edition of...