Welcome to another Agents Do Charity, meaning it’s not just Friday but also a day to think about fund-raising in the year ahead.

Please send details of your activities to press@estateagenttoday.co.uk.

We’ll let the industry know of your good deeds…and encourage a few more donations, too.

And talking of giving money, we start with an ingenious fund-raiser...

Spend A Penny Campaign: Managed live chat provider Yomdel has announced a new partnership with Just A Drop, a global charity working to bring sustainable safe water, sanitation and hygiene projects to communities around the world.

Under the “Spend a Penny” campaign, Yomdel clients in multiple sectors including property will be invited to “drip” in just 1p per live chat to a Just a Drop fund, meaning this is a very affordable way to help make a real difference to vulnerable people.

Yomdel will in turn match fund to boost donation volumes.

The firm has also deployed its 24/7 managed live chat service for free on the Just a Drop website to help boost direct donations and capture other enquiries.

Yomdel works with close to 4,000 estate agencies in the UK and Australia, plus it is also active across numerous other sectors including finance, medical, construction, and hospitality.

During 2019, Just a Drop reached an incredible 165,753 people across Africa, Asia and Latin America with projects for safe water, sanitation and hygiene.

Sue Ryder St Johns: This is the chosen charity of a brand new agency called Annafield Estates located in Buckden and St.Neots in Cambridgeshire - and special thanks to branch manager Duncan Young for getting in touch with us.

Duncan’s team will this year be taking part in a Paintrush which, for the uninitiated, is a jog, walk or run during which people get showered in multi coloured paint in support of charity - sounds like fun to us!

The event is on March 29 and you can see more details here.

Leeds Good Causes: Leeds-based agency Manning Stainton has donated £80,000 to local charities, schools and organisations in the past year, helping over 100 different groups in the process.

Key events the agency sponsored include the Yeadon Carnival, the Wetherby 10k and Beeston in Bloom. It also supported numerous schools including Horsforth St Margaret’s, Carlton Primary and Talbot Primary, and donated money to help other organisations including Physcap, the Yorkshire Indian Society and Candlelighters.

The money was all given as part of the Manning Stainton Community Fund, which the estate agent launched in 2004 in a bid to support local causes across the region. 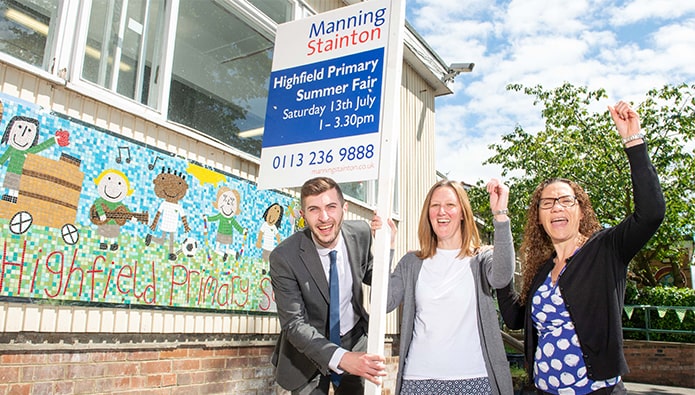 Mark Manning, managing director, says: “We’re really passionate about supporting schools, organisations and events in the areas we operate in, and we’re proud of how many great causes we’ve supported over the last year. Our donations make a huge difference to so many schools and organisations across the region that are doing great things and we’re looking forward to supporting many more across 2020 and beyond.”

TDS Funding: The final closing date for applications is looming for the latest round of funding from the TDS Charitable Foundation.

On Monday - January 20 - the charity will be closing the current bid to review proposals before deciding which will be awarded grants of up to £10,000 per project. To date, the Foundation has awarded £753,375 to fund a range of different ventures, all with a core focus to advance education about housing rights and obligations.

As a previous recipient of the Foundation’s funding, Stuart Pearson, Chief Digital Advisor at the Citizens Advice Manchester, urges people to put forward their ideas.

“We found it hard to sell the idea for innovative technology, as it was difficult to convince investors to support us in something they didn’t fully understand. The TDS Charitable Foundation were different and could see the potential in our idea. They took a gamble on us, which really paid off. Our project has since won the National Citizens Advice Innovation Award!” explained Stuart, whose organisation received £21,000.

It’s easy to apply. You can complete the form here.