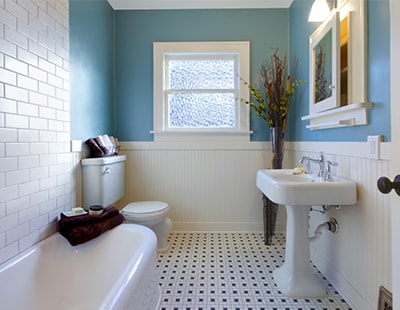 A downstairs bathroom could knock up to 6% off the value of a property, according to estate agents.

Having a family bathroom downstairs instead of upstairs could therefore see the average UK home worth £13,580 less based on an average price of £226,351.

In London, a property with a downstairs family bathroom could be worth around £27,000 less based on an average price of £478,853, according to research by Direct Line Home Insurance.

The study, which spoke to 100 agents across the UK, also found that the presence of a downstairs bathroom would put 44% of consumers off buying a property.

The region least favouring downstairs bathrooms is London, where 57% of participants said they'd be putting off buying a property if it had one. While those in Scotland were least likely to be put off with just 28% saying a downstairs bathroom would turn them away.

What's more, 25% of agents taking part said they are advising homeowners to move downstairs bathrooms upstairs before listing their property for sale.

"Downstairs bathrooms are usually found in older properties accessed through the kitchen and despite them featuring in thousands of homes across the UK, they divide opinion," says Dan Simson, head of home insurance at Direct Line.

"With some home buyers actively avoiding properties like this and others finding them much more convenient, especially if they are less mobile or have young children."

The latest way to boost asking price: set up a home office ...

A home office set up in a dedicated room apparently adds...