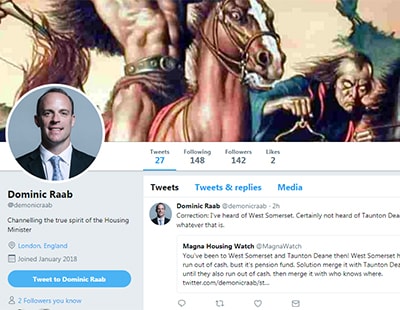 It didn’t take long - within 24 hours of high-flying Tory Dominic Raab being named as housing minister, so there was a parody Twitter account.

It’s been entertaining reading so far, starting with his initial “Oh God. Housing!! What a dreary brief. Still, I don’t suppose I’ll be there for long” said the fake Raab, following it up with “Loads of insincere congratulations from the muesli-munching brigades of ‘housing professionals’. Straight bat needed.”

Yesterday he swung into action with his first major decision. “There you go, demonstrating that I’m an all-action kind of chap. I’ve already sacked the namby-pamby Homes & Communities Agency and replaced it with the much more robust and British sounding Homes England. Grant Shapps has nothing on me!”

An hour later the initiative went pear-shaped however, when the parody Raab admitted that he had been blocked from following the new Homes England Twitter account. As ‘Raab’ put it himself - “What the Dickens is going on?”

So far, so funny - but ironically the fake account has given more attention to housing than the real minister himself, at least according to his tweets.

The genuine article tweeted in his first 48 hours as housing minister on the subjects of plastic bags, British manufacturing and disposable income - but not actually about housing.

If you want to follow the real Raab he’s on @DominicRaab; the parody account is on @demonicraab.