Only a week to the Christmas break and still our industry goes above and beyond the call of duty to raise funds for charity.

As ever, we’re here to help - just send us details of your fund-raising efforts and we will publicise them. Drop us an email on press@estateagenttoday.co.uk.

In the meantime, we raise our Santa caps to these excellent fund-raisers...

The amount of money available to fund innovative projects that benefit the private rented sector has been increased for 2017, and people are urged to submit their bids before the deadline on Friday January 27 2017.

More than £200,000 in grants has been given out by the TDS Charitable Foundation since it was established in 2014 by TDS, the insurance-backed tenancy deposit scheme. As the only not-for-profit scheme in its industry, TDS is committed to raising standards in the private rented sector.

Industry expert and report author Kate Faulkner said: “Without the funding from the TDS Charitable Foundation we would not have been able to carry out this independent research, which I believe is vital if we are to fully understand the industry in which we work and start challenging the misperceptions surrounding the private rented sector.

“I’d never applied for funding before but there was plenty of support available at every stage of the process and I would really encourage anyone who thinks they have a project that meets the objectives of the foundation to apply.”

Professor Martin Partington, chairman of TDS and the TDS Charitable Foundation, said: “Our not-for-profit status enables us to use part of our surplus income to raise standards in the industry we serve by reinvesting in education and training and promoting best practice, and as an organisation this is something we are passionate about.”

For more information on how to submit a bid before January 27, visit www.tdsfoundation.org.uk. The successful applicants will be announced after the meeting of the Trustees in late February 2017.

The Pudsey branch donated a luxury Marks and Spencer hamper to the school for use as the star raffle prize at its annual Christmas Fair. The event was organised by teaching staff and members of the Parent Teachers Association and the money raised will enhance the Forest School; an exciting initiative introduced at the start of the current school year.

“As a company we are proud of our long association with the local community in which we operate and love helping school, clubs and other worthwhile organisations through our Community Support Programme” says a Manning Stainton spokeswoman. 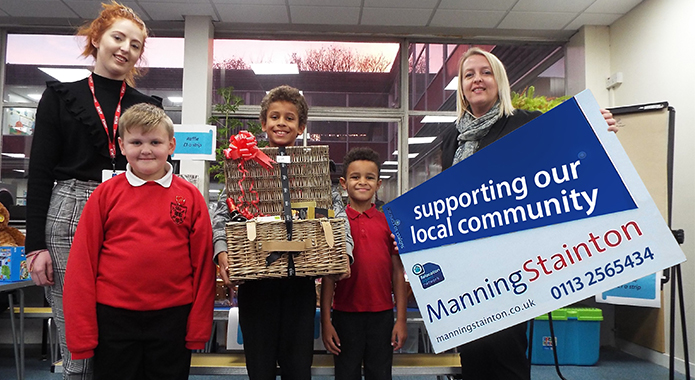 “Next October I am going to be trekking the Great Wall of China in aid of The Alzheimer’s Society as well as volunteering as a befriender for a local lady who lives with her husband and mother who are both sufferers” explains Samantha.

Good luck with the trip - a wonderful cause. Here is the JustGiving page.

Children In Need/South West Childrens’ Hospice: As part of its charity fund-raising this Christmas, Heritage estate agency at Portishead in north Somerset is supporting these two great charities.

The agency is today hosting a Frozen-themed event in its office - children and parents welcome - with Queen Elsa and Olaf both present. There will be photo opportunities, too.

Agents’ Giving: An auctioneer who single-handedly raised more than £5,000 for charity by completing both the New York Marathon and the Great North Run admits that competing in the Strictly Agents Dancing competition organised by Agents’ Giving was his toughest test.

“The Agents Giving dance-off was by far the most nerve racking and challenging –and also strangely the most rewarding – but clearly a career in dancing is not for me as I finished bottom of the leader board” explains Ben Ridgway, who works for the I Am Sold auction house in Newcastle.

Marie Curie: Children from Ratho Primary School near Edinburgh have planted daffodil bulbs at a CALA Homes development as part of the developer’s campaign in support of Marie Curie.

The housebuilder has pledged to donate £1 to the charity for every bulb planted at one of its developments across the country throughout December. Marie Curie is the leading charity providing care to people with any terminal illness in their own homes or in one of the charity’s nine hospices.  It has almost 2,100 nurses who work in the community to provide free end of life care to 94 per cent of the UK population.

Agents Do Charity - no stepping back from fund-raising… ...

Stepping back and moving out of the front line is all...